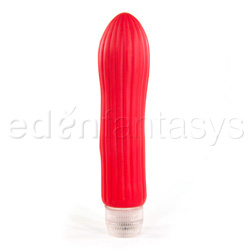 hello? Is this thing on?

Doc Johnson makes some great toys but not all them hit the mark. Here are some good points on the Vivid red hots Janine:

The material (TPR) is interesting. I’d never used it before and found it to be smooth but with a bit of drag sensation. I kinda liked it. The ribbing didn’t do much for me until I began to swirl it around and twist it while it was inside. The more lube in this case the better. It’s a nice shape for those new to toys. Actually, I think this is a great toy for beginners. Not too big, soft, has the gradual increase in size then down to a bit smaller size so you can more easily close in around it and really take it in.

Although make sure you clean in between the ribs really well, it’s a bit of a groove and found that unless rinsed really well it collects soap residue.

However… Vivid red hots Janine just never really got me “going”. I thought my body was contemplating getting excited but… it just never got me all hot and bothered. I tried both lubes. I tried it in my pussy as well as anally (condom of course) etc etc. It was fine anally but that isn’t really what it was meant for and I just thought I’d give it a try. That is NOT for beginners with this toy (back door). If trying, lube very well and hold on to it! I don’t really recommend it since it could be very slippery and it would be better for teasing than actual penetration.

As far as vibration goes, well, I wish I had something to say here. As soon as I went to turn it on, the dial broke right off. I’d say I’m a girl of average strength so I don’t think I forced it and I’m going to give it the benefit of the doubt that that would not happen every time, none-the-less…it did with this toy and I didn’t even get to try the vibration experience. I was hoping that part would up the star count on this toy. Alas all it did was bring it down further.

Bottom line, great toy for beginners and a little teasing but might leave the more experienced toy user feeling a bit deflated.
This product was provided free of charge to the reviewer. This review is in compliance with the FTC guidelines.