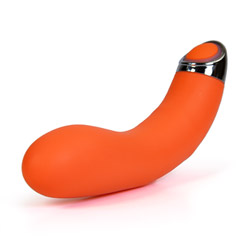 I label this as the "Lexus" of G-spot vibrators. Same or better features of a luxury vibe at an excellent price! It's fun and easy to use with its one-touch control. Great stand in 3-somes. Long-lasting charge and did I already say it is very powerful?
Pros:
Powerful, easy to use, rechargeable, lightweight, long lasting charge,easy to care for, girthy.
Cons:
Could be longer for those whose G-Spots are further in.
Rating by reviewer:
5
extremely useful review 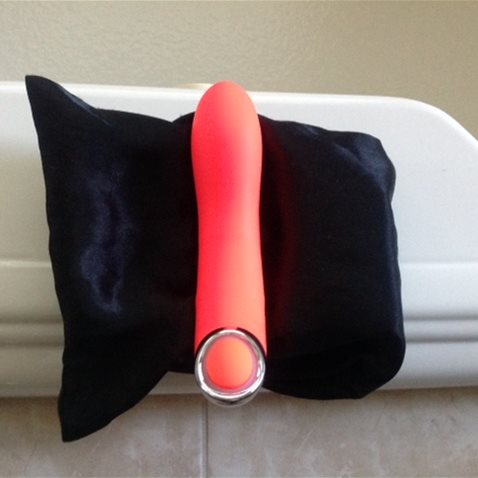 The Infinity is made of hard plastic and coated with a thick layer of quality silicone. Like all quality silicone products, it does not have any taste or odor. It is completely smooth with a slight drag. No ribs, ridges or nubs whatsoever on this squash-shaped gem. As any silicone toy, it will pick up dust, lint, and hair easily.

Since OW uses it to stimulate her clitoris before taking it vaginally, she gets fairly wet. So only requires a little lube, if any at all. It's not a thrusting toy. If it was to be utilized as such, more lubricant would be needed to compensate for the slight silicone drag.

Using a water-based lubricant should take care of the slight drag. So, no problem for beginners and certainly not for advanced users.

The access cap to the charging hole is made of hard plastic and has a plated silver ring. This ring is slippery so hard to grip. It will be best to wipe one's fingers completely dry if wet or have some lube on them. This orange colored push button control itself is made of plastic. 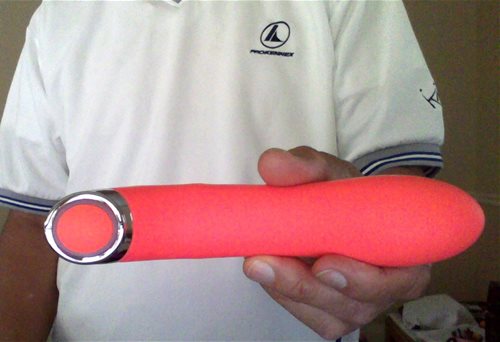 There is a seam on it, but barely barely noticeable to the naked eye. You definitely will not feel it.

The only marks on this toy are engravings saying: C E and a no use in water symbol and MADE IN CHINA.
These engraving( actually carved in ) are barely noticeable and do not interfere with play.

I looked up C E out of curiosity and found this :

"CE stands for Conformité Européenne, which is French for "European Conformity." A product in one of the controlled product categories cannot legally be sold in the EU unless it has passed the tests to receive the CE marking."
"For a company trying to sell a product, getting a CE marking makes things much easier because it means you can sell the product anywhere in the EU. In the United States, electronic device manufacturers need to meet the same sort of requirements to get FCC approval."

The Infinity has a cute "Squash-like" shape but in an orange color. Btw, it only comes in orange. It is a non-phallic toy, totally futuristic in appearance.

The curve is perfect on this! It has a slight bump on the bulbous tip. If your G-spot is anywhere close, it will definitely get rumbled. While using vaginally, only the control cap will appear and sit up for easy access. That is great, because you will be constantly changing and playing with the 10 patterns. The control button also lights up and flashes. This control button does not have a 100% waterproof seal, so it is not bathtub submersible. 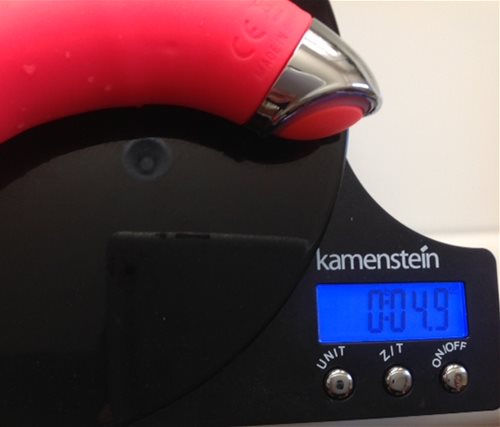 Here's a pic for size comparisons. Side by side with the Eden Bendable Buddy and Eden Dual Tongue. 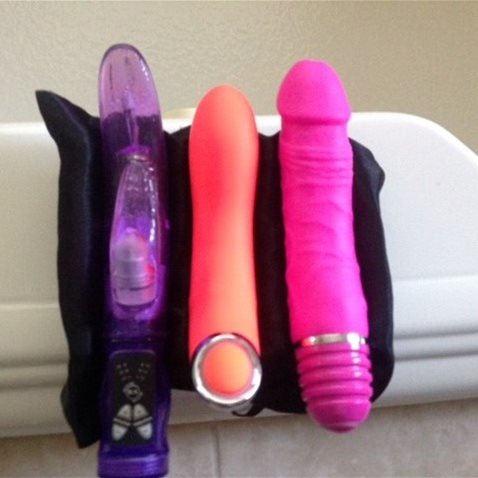 Here's also a size comparison to a medium banana and Kirkland 16.9 water bottle. 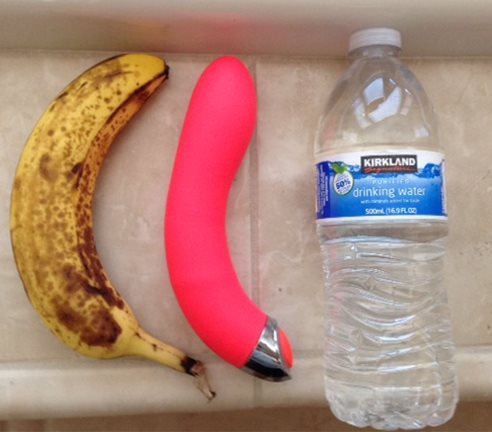 The Infinity is rechargeable via an included USB cord. To charge this G vibe, you remove the silver cap and insert the male end of the USB cord plugs into a tiny hole. (See pic) While charging, a light will shine. When the light goes off it is fully charged and will last about 2 1/4 hr. It does not weaken when near the end of its charge. It will stop functioning totally when battery is drained and will take 3 hours to fully recharge using an AC adapter. We only use an adapter, not our PC USB.

The instructions recommend charging 8-10 hrs before first time use. The cap has a water proof design and o ring. Unfortunately the push button itself does not appear to have a 100% seal. So it is only submersible to the silver ring.

The Infinity has only 1 touch control button which is on the opposite end of the bulb. It cycles only one direction through its 10 patterns. The button is 3/4 inch wide. The button protrudes slightly and has a definite click when you push it. If the vibe is not used for a while, you will have to push it twice. The first time is a "Wake Up" push. The second push will start it. When used for the first time or whenever the cap/control button is removed, it reverts back to setting #1.

If you have the Eden Bendable Buddy Vibe, this has the same exact "Technobeat" computer chip, therefore the same patterns. However, the vibrations are stronger on the Infinity by quite a bit.

100% of the vibrations can be felt in the bulb tip. At the midway point, only about 30%. Near the one touch control, only 10%. Positioning the bulb at your sensitive spot will be very important, since the strongest vibes are at the bulb only. If your G-spot is more than 6 " in, this may not rest on it, but will certainly rumble it with authority.

While in use, the toy is fairly quiet. Buzzing will be heard only slightly under the blankets. You will also hear the mattress rumbling due to its power.

Here's a look with the cap open. Small hole is where charge pin is inserted for charging. 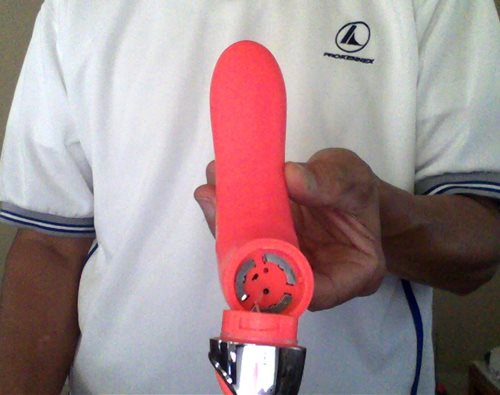 This pic shows the USB cord in place and the tiny charge light is on. It will go off when fully charged. 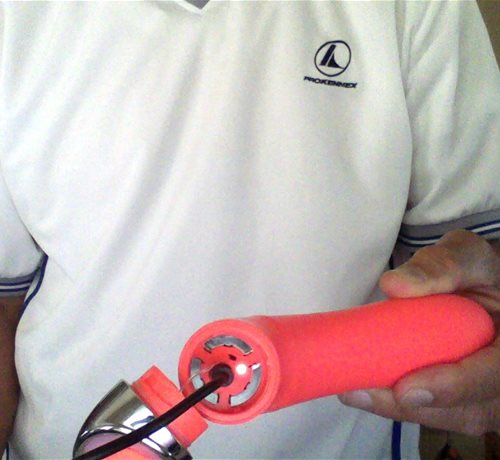 Next to hard ABS plastic, glass, and stainless steel, silicone is the next safest material. We only use a water-based lube with our silicone toys. The Infinity, being waterproof, can be cleaned under running warm water and antibacterial soap. Or you can use a commercial toy cleaner. Every now and then, if you want to take an extra step, you can soak it with a 10% bleach solution. Then rinse well with clean water.

As silicone picks up lint, dust and just about anything, we clean before use also. This toy can also be warmed up easily under warm running water if too cold for your privates.

Silicone, being non-porous, is easy to care for. Just remember, do not use silicone lubricant. It will melt your toy.

I would like to point out, while this toy is splashproof, meaning you can wash it under running water and play with it in the shower, it is not 100% submersible. This means you can not use it in the pool or tub.
This is stated on pg 2 of the instruction booklet. 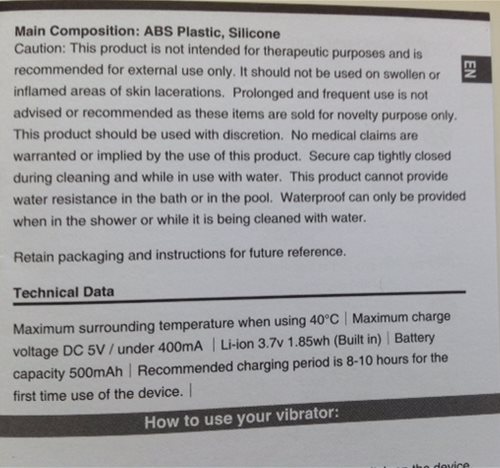 The Infinity came in a sleek, black box with a clear window to display the product. It sat on a foam bed, with cutouts for the vibe and USB cord. Under the foam bed was the instruction pamphlet. The foam sat on another box and could be used as a storage container. Nice packaging versus cost-cutting shrink wrap and cardboard.

The box could also be wrapped easily for gifting. Due to the foam bed it would not rattle in transit. 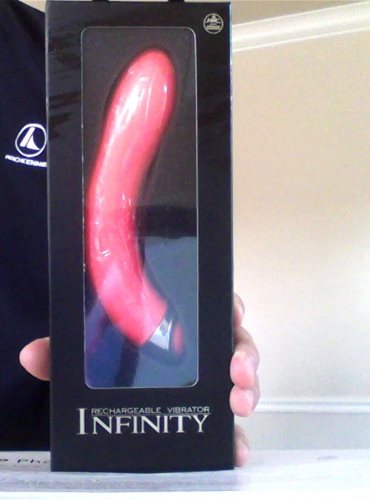 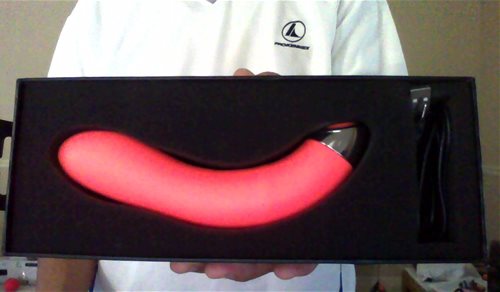 The back of the box depicts composition, technical date, warnings,the 10 dynamic rhythms and some generic picture symbols 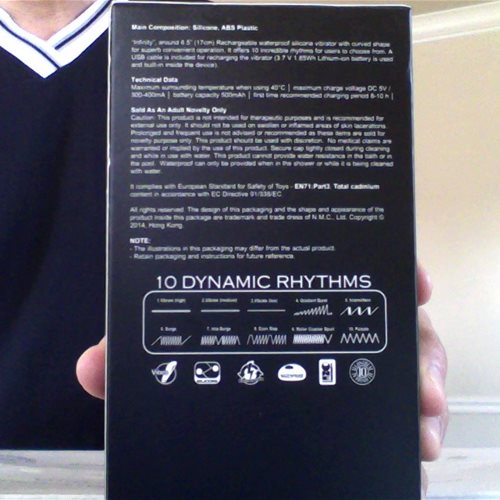 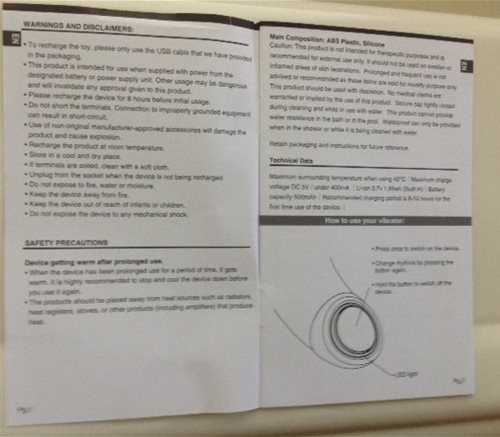 This powerful, easy to hold vibe gives her a good night sleep. Very relaxing to use before turning in.

I encourage her to start early as she will use it on her clit at times for an hour before even going for her G-spot.

I like her to use it when we are in the spooning position. While we are doing doggie, sometimes my penis hits the vibe. Due to the thrusting the "Squash Machine" gets pushed around. When she rushes to put it back on her clit, often she puts it a little too far. Ouchie !

We have not tried it for double penetration yet. We are afraid it's too large for us. Our slimmer Eden Dual Tongue is more suitable for that.

OW loves very strong clitoral stimulation. Since getting this, she has not picked up her all time favorite, the Hitachi Wand. Which I nicknamed her "Japanese BF". She likes the wideness of the bulb of the Infinity also. It rumbles her entire vagina area, especially the labia with authority.

When she first saw it, she said, "How Pretty !". She turned it on and it nearly shook out of her hand.

This is her usual routine after few days of playing with it:

She starts at the no. 1 setting, high. She'll stay there for 10-20 mins. Then jumps up to no. 4, Gradient Burst. Hangs out a little at no.5 Intermittent. Then it's no.6 Surge for few minutes. Then on to Roller Coaster and Pulsate. When she uses those last 2, I know she is real close to reaching the big O.

After that warm-up, she uses it vaginally. I can see the light flashing while it's between her legs. Like a little light show. By this time, she is breathing heavier. I can tell when she changes the patterns. The mattress will make a different rumbling sound. For vaginal stimulation, she does the same patterns pretty much.

Her favorite is when we do it doggie style, while she holds it on her clit. She buckles more than usual with the additional stimulation. A little too much, if you ask me. I prefer to be in control. Lol.

She has used this vibe for about a month now, 3-4 times a week. Only once did she say she might have had an orgasm. I attribute this to it not being long enough to hit her magic spot. The Eden Bendable Buddy is almost as powerful, but goes in 1 inch further. The Infinity's extreme curve doesn't allow it to go in as far. The Eden Bendable Buddy is also a bit wider at its phallic head.

I did try the Infinity on my prostate. I put a condom on it, lubed it up and in it went. Having had experience with the Fun Factory Share and the BS, is nice dildo, the girth of the Infinity was no problem. It was strong, but did not excite my prostate. Since the prostate is located close to the anus, the bulb of the Infinity went too far up. In order for a male to get pleasure from this, he would have to hold the bulb on his prostate. As mentioned already, 100% of the vibrations are at the bulb end. In this manner, you can milk the prostate easily.
Follow-up commentary   I still like it 6 months after original review
Well, sadly the Orange Dream machine stopped working. We clicked "still like it" because that is the truth. However we will not be getting another. Just got a U shape dual simulator that knocks her socks off !

Guess this vibe was so powerful it rocked itself out !
This product was provided free of charge to the reviewer. This review is in compliance with the FTC guidelines.