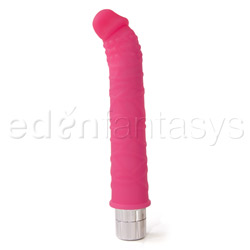 As I took the toy out of the packaging, I discovered that it DID feel of high quality. The 100% silicone felt AMAZINGLY silky smooth. I couldn't wait to slide that inside me! To add to this anticipation was the feel of the bumps under and around the bottom of the realistic head. Continuing down the shaft are non-realistic veins to add even more to the texture! Because I don’t like super-realistic phallic toys, I love the bright pink color. Another perk is that the material did not smell one bit or taste bad. It actually didn’t taste like anything at all. This helped my belief that it was of higher quality.

I actually did not have a bad thing to say about the toy, till I used it the second time. The first time I used it was only for a few minutes so I wanted to really explore it more. It would not turn on, or it would turn on and stop. I figured maybe already the batteries were dead. That was not the case. This toy must not be internally well made, because it’s broken now. IF it works, it makes very loud vibration noises, where before it was really quiet. I can’t apply pressure, it stops working. So that really affects my review. I have actually never had another toy break.

Honestly I would give this toy 5 stars if it had worked more than once! But I’m giving it 3 stars because of it breaking (I later added a star because it didn't break further and still was amazing). Vibrations when they work are a 4. I love the variety, but the first option is next to no vibration. I give it 1 bee when it's working correctly. It was super quiet until it broke.

Hopefully I got a lemon and this toy won't break for everyone.
Follow-up commentary 27 days after original review
I still have not mastered this toy the way that I want to. I wanted to learn how to ejaculate or squirt. However, with all the practice I have been getting from using this toy, I have learned how to control my orgasms much better. I can control it so I finish in 30 seconds or in an hour. The last pulsing vibrating option has become my favorite of the 5. If you have not experienced a pulsing random vibrating pattern, you need to try this. Also the toy has not been giving me as many problems as it did when it broke for a while. I thought for sure it would have stopped working completely by now, but it hasn't. Still, it is not how it was when I first used it though.
This product was provided free of charge to the reviewer. This review is in compliance with the FTC guidelines.

My Pinks bombay tags
About author