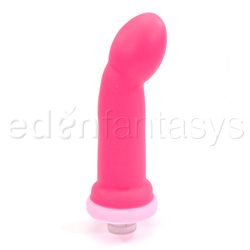 After putting the battery in, I tried out all the speeds. It felt moderately powerful and it was nice and quiet. The vibrations would unexpectedly stop once and a while and I would have to fidget with the on/off knob to get it working again.

When I tried it out, I found the tip to be really hard to get in me. The package recommends using a lube so I tried that. The extra slipperiness definitely helped, but initially getting the round head in was still a bit awkward. After using it a couple times I got more used to the size, but it is still too big for me.