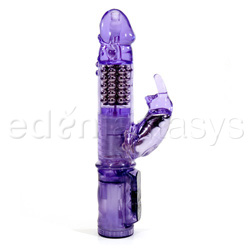 I fell into the rabbit hole...

I think this item is completely worth it just off of the vibrations from the clitoral attachment; even though I did need to maneuver the attachment a bit to get it into the right place for me, I still had a fantastic orgasm the first time I used it. A great addition to any collection!!
Pros:
Strong vibrations on the clitoral attachment, LED control pad, cute design.
Cons:
Thick jelly, rigid/stiff shaft.
Rating by reviewer:
4
extremely useful review

It has strong vibrations not only in the clitoral attachment, but they can be felt along the lowest portion of the shaft of the device, which is great for stimulating the sensitive vaginal opening. The rotations were nice; but, because of the thick jelly that surrounds them, it's difficult to get the full effect of that feature. Overall, this specific vibe is like heaven and I could use it all day long!

I liked the size of this vibe. When I first started using it, it was a bit bigger than I anticipated it being so I did need to work my way up to inserting the entire thing. My biggest issue with this product is that HARD jelly; I don't feel like I have an issue with accommodation with any other vibe, and this one is difficult! Once I did have it in, and I had the rotating beads turned on...I COULDN'T FEEL THEM! The jelly surrounding the beads is so hard, that even on the highest setting I could barely tell they were turned on.

Now that I've used it more often, and I have more experience with toys that need to be inserted, I don't have as much of an issue and I keep this in my regular rotation.

Because this is made of jelly, I do use a condom with the device for sanitary reasons. Otherwise, the actual cleaning is very easy to do and I just use either a washcloth with warm water and mild soap or a spray toy cleaner with a soft cloth. It's also pretty easy to clean because it is completely waterproof.
Follow-up commentary   I still like it 2 days after original review
I still use this toy on a pretty regular basis, and recently brought it with me on a short trip out of town. I intended to use this with my boyfriend, but the person he is living with doesn't know about our toy collection and I didn't want him to feel uncomfortable. A little loud, but if I don't use the rotating beads it's not too bad (which isn't a big deal since I can barely feel them anyway!) Otherwise, this toy is perfect!
This content is the opinion of the submitting contributor and is not endorsed by EdenFantasys.com