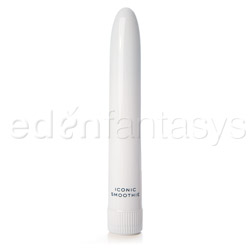 The Iconic Smoothie is made of hard plastic with zero texture which makes it ideal for beginners, or anyone really. It has no smell or taste and is nonporous. I think it's nonporous at least; there seems to be some disagreement there. EdenFantasys says hard plastic is nonporous so I'm going with them.

There's a reason this design is a classic; it works. It's neither very long nor girthy with six inches of insertable length and a one inch diameter. Advanced users might want or need more in either department but it's perfect for beginners. It's totally straight so a person seeking G-spot play might have a hard time with this one. It works great for clitoris stimulation as well.

This vibe has a traditional twisting dial to turn it on and cycle through the settings. It's simple and functional and I only have a problem with it when I have it on the lowest setting and bump it with a thigh or something; it tuns the dial off. That's an operator malfunction, though, and by no means any fault of the toy. The vibrations are nicely dispersed along the length of it and in the tip, making it just as good for a multitude of things and not just thrusting, such as body massage. It's not very noisy, especially while it's inside someone. I'm a paranoid person and I use it in a house that multiple people live in.

It's my experience that this toy is completely waterproof. I even had it in the bathtub with me. You should always make sure the cap is completely screwed on just in case.

This toy uses two AA batteries and I've used it regularly with only changing them once. Putting in the new batteries certainly amped up the power, though, so someone who likes a lot of power might want to change them more frequently.

This toy is super easy to take care of. It's waterproof so you can just give it a wash with soap and water. I use a spray cleaner due to privacy issues and it works just as well. As it's plastic, any lubricant can be used with it. Condoms are always suggested when sharing between partners of course.

I store it in a lockable sex toy case but that's just because I have a nosy family. It would be just as easily put almost anywhere.

I found the instructions suitable enough but I also figured it was pretty self explanatory. I did read of course. A person should always read instructions for something they intend to put inside of them.

My favorite part? JimmyJane products have warranties. This line, The Usual Suspects, has a one year warranty in case something is horribly wrong with your toy. That's always awesome, right?

This was my first toy ever and I'm very pleased with my choice. As I was a newbie to the whole orgasming thing, it took me a bit to figure out how to get there but this certainly helped. I prefer to use the Iconic Smoothie in tandem with another, smaller vibe on my clit. I think coordination is a practiced trait as opposed to an inherent one but it's definitely worth learning, lol.

As I don't exactly have a vast amount of sexual experience, I don't know if the orgasms it gives me are particularly powerful. I know they're good, though.

I love this vibe. I know nothing lasts forever and no machine is immortal, but it will be a sad day indeed when this trooper falls in the line of duty. Maybe I should buy a spare just in case...
Follow-up commentary   I still like it 3 months after original review
I adore this vibe! It still works perfectly, and I would totally recommend it to anyone. I seriously lucked out with this one as my first. The material is still holding up strong without any visible wear and tear, it still works fully submerged in water, it's still a breeze to clean, it doesn't eat batteries like a monster and hasn't gotten any louder; it's perfect.
This content is the opinion of the submitting contributor and is not endorsed by EdenFantasys.com