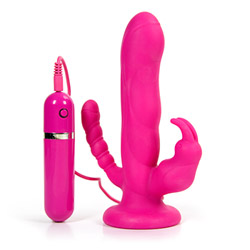 The entire thing, from suction cup to bunny ears, is of the same material, -- non-porous silicone. This material is hypoallergenic, latex, and phthalates-free, with a safety rating of 10/10, according to the product description. Although it feels a good bit different from any of the higher quality silicone of other toys, it's more rubber-like than silicone and does not have the smoothest drag. It, however, isn't nearly as catchy against the skin as jelly.

The 10 different deep, low, and rumbly vibrations are felt only slightly in the entire shaft, and mostly just in the bunny -- where the motor is located -- and not at all in the third, anal portion. The second motor is in the end, the g-spot tip, but is hardly noticeable. The different speeds of vibration, are all operated from a single push-button on the control, which does light up by the way aren't much different. You can obviously tell the pulsating vibrations from the steady ones, but I found all of them to be quite boring except for the highest, steady vibration. They're by no means powerful, but can certainly work one into a heated frenzy with some patience and elbow-grease.

This runs on 3 AAA batteries, which seem to stay going for at least a couple of lengthy uses. I didn't notice any drain of the batteries, and there's no bog down of the vibrations when pressure is applied.

While the packaging is discreet enough, the toy itself cannot be mistaken for its true identity. The packaging is a pretty tasteful black box with a clear covering that has text to describe the toy's features. I was pleased with the informative packaging, which does include the size. The toy is fully visible through the box, and the side does say "amazing vaginal stimulation," which I thought was laughably odd, and that would prevent me from giving it as a gift to many people, but it's far more gift-worthy than most! There's no distasteful images of people/nudity, so I can't complain about the packaging.

The box could be used to store the toy in for a short period of time before wearing out, but boxes typically just take up so much more space than the actual toys that I tossed it. The toy alone is already quite bulky.

The size was a bit big, making it uncomfortable for the most part of my using it, but with plenty of "warm-up" and careful maneuvering, it is do-able sometimes. The hard g-spot bump placed upon an already thick-ish shaft was too much pressure on my g-spot, which tends to require very little pressure in order to come alive. This leads me to the conclusion that this toy is more suitable for those who like size a bit thicker than average and need a lot of g-spot pressure for an enjoyable experience. I've no doubt that this would be great fun for someone who fits that description.
This product was provided free of charge to the reviewer. This review is in compliance with the FTC guidelines.