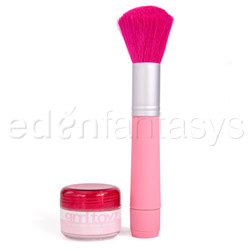 Boy, were we wrong! First, the vibrating handle is great; it has a nice level and the entire toy vibrates, shaft and brush. The brush holds just the right amount of dust to lightly spread over the desired area, be it nipple, vaginal area, or penis. It feels great going on! The brush is quite stimulating. And last but certainly not least, the dust tastes good! It doesn't have an artificial aftertaste at all.

My husband put it on me first, and when he went down on me, I could tell by his enthusiastic "Yum!" the powder must taste better than I thought. He played with the brush on me and that felt wonderful, too. Next, I used it on him. It was fun to run the brush up, down, and around his penis and over his balls. He sure seemed to enjoy himself. I loved the taste as I gave him oral pleasure while running the vibrating brush over his balls and around the shaft... believe me, the results were spectacular.

We love this sex toy. We both expected not to, but we were completely won over the very first time we used it. The edible dust will last a long time; it doesn't take much at all to have a very good time. The brush and the handle clean up easily; I used a baby wipe. Two bits of advice: have an AA battery ready because it is not included, and put down a towel. The dust sort of gets everywhere when you open up the container.
Follow-up commentary 16 months after original review
I just wanted to add that here, over a year later, this is still by far and away, the best-tasting food-related sex toy I have ever had. I really do recommend it, it stands the test of time!
This product was provided free of charge to the reviewer. This review is in compliance with the FTC guidelines.

Reviewed by Destri (Eden Writer) The only queer people are those who don't love anyone
Rank
5.7
wrote 84 reviews
Comments
Make a post
Forum
No discussions yet.
Thank you for viewing Incognito tickling dust brush – tickler review page!
Top