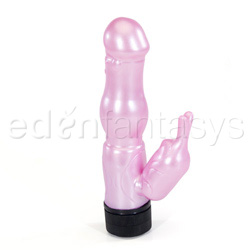 There are only a few good things I can say about this toy. Jesse's dual stimulator was very easy to clean. I have heard that rubber is hard to clean being that it is a very porous material, but this toy was a really smooth rubber and cleaned really well.
Rating by reviewer:
2
extremely useful review
I was really excited when I received Jesse’s Dual Stimulator. It looked like it was going to be great, but I was definitely disappointed.

The description of this toy says that there are two independent controls for both the rabbit clit exciter and the shaft. However, there is only one dial, and that controls the shaft; the rabbit doesn’t move or vibrate. If you want any type of clitoral stimulation from this toy, you have to position the rabbit in the right spot and move it yourself. Even when the toy is on the highest speed the rabbit barely vibrates, and it is only vibrating because the shaft is vibrating hard enough to send a little to the rabbit.

Another problem with this toy is that the bottom, where the battery compartment is, got really hot real fast. The easiest way to hold it was of course at the bottom, but that shit was burning my hand. I tried turning the speed down some and not holding it with my whole hand but rather by the little screw on the bottom that holds the dial on. That part was even hotter!

There are only a few good things I can say about this toy. Jesse’s dual stimulator was very easy to clean. I have heard that rubber is hard to clean being that it is a very porous material, but this toy was a really smooth rubber and cleaned really well.

The batteries last a while with this toy, and it uses two AA batteries. That is definitely a big plus with any sex toys I would use because some of those watch batteries are expensive and not easily to find. The vibrations of the shaft were very powerful and felt really good. Yet if you turned the vibrator to the higher speeds, the batteries rattle around really loudly; and after having it on for a little while at the higher speeds, the control dial started acting up and would shut on and off. I would have really liked this toy if it gave better clitoral vibrations; I thought that was what rabbit vibrators were for.

Overall I rate this toy two stars; it is not worth the price. I would rate this toy as four vrooms; this toy’s vibrations are pretty powerful, and it’s too bad they weren’t powerful in the right place. I would give this toy four bees; now maybe it’s not as loud as a large appliance, but those batteries rattling around were really loud and annoying and enough to ruin it all.
This product was provided free of charge to the reviewer. This review is in compliance with the FTC guidelines.