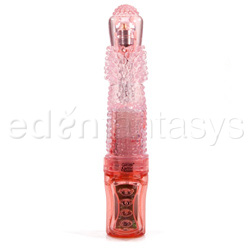 The only issue that I can say that I had was that the battery pack cover was hard to put back on. It seems to hook on one side more easily than the other. Along with the battery pack cover, I have to tell you to make sure you do use a good lube since there are raised nubs that stick out slightly farther than the head.

I give the Just Perfect Pink five stars. I really did enjoy this toy. I have used it a few times already in a week (after sneaking it back from my wife).
This product was provided free of charge to the reviewer. This review is in compliance with the FTC guidelines.