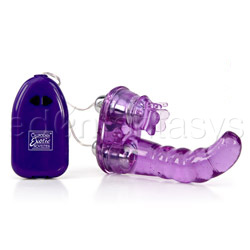 I don't want to count this toy out - when it worked it was really fantastic. Based upon my luck with other events in life, I have to chalk it breaking up to me just being naturally unlucky. My unluckiness is why I give this toy a 4. It's a great toy, and it makes you orgasm like you never imagined and isn't relatively loud.
Pros:
It is very powerful and pleasing.
Cons:
One of the bullets died out after a couple uses, and the other died out after about 1 year.
Rating by reviewer:
4
useful review

This was the first g-spot toy I had ever tried out. I was intrigued by it because I had never had a g-spot orgasm, and apparently, it was a big deal. This toy made it a big deal. When using it alone, it hit all of the right spots to get me off, but it wasn't as strong as I hoped. That was the case until a friend of mine used it on me. She knew exactly where to put it and how to move it, and before I knew it, I was reeling and shaking like I never believed possible. If you know what you're doing, this is an amazing toy, and if you don't know what you're doing, find a friend that does and have them do it for you.

When first taking it out of the packaging, it had a smell like most toys tend to, but it wasn't too over-powering. I have used much worse-smelling toys before. The taste: I'm not sure how many people use their own saliva as lube, but I definitely have a time or two, and the taste isn't that bad. It is a little bit weird, but nothing completely out of the ordinary for a toy. The texture is nice and smooth and is good for beginners or advanced users.

The design is really nice. The only major problem I had was with the wires to the bullets being a bit too long. They often got tangled because I'm a bit of a clutz. The shape works perfectly for where it is supposed to hit, and the size is really great for my body. It was just the right size for me. I wouldn't say that the toy is difficult to hide as long as you have somewhere to put your toys. I have an entire case full of them, so hiding isn't really difficult for me.

The toy functioned really well the first few times I used it. The bullets fit inside the base of the toy underneath the shaft and the little nub for your clit. The biggest problem for me was that one of the bullets died after about 3 uses and the other about a year later. When I buy things, I don't expect them to last a lifetime, but this died too quickly for my liking. It was probably just my luck though that I got a defective one.

The controls are simple to use unless one of the bullets is dead. If it's broken, it takes a few seconds to figure out which side is the broken one and which switch is for that side. The noise produced wasn't too loud, but it probably isn't the best to use if you need to be quiet.

I store this toy in a chest with all of my toys. I always clean it before and after use with my toy cleaner; bacteria is the last thing I want in my snatch. I haven't had a problem with using it with any particular lubes although my body tends to produce more than enough on its own on most cases.

The packaging was the normal plastic packaging. It was nothing too exciting, but it was definitely not good as a gift or storage box.
This content is the opinion of the submitting contributor and is not endorsed by EdenFantasys.com