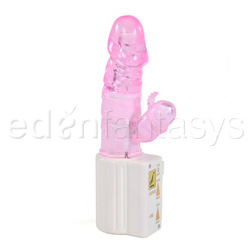 Once I figured out how the batteries went in, it was time to experiment! I took a little lube and inserted it while on medium vibration and high rotation. Rotation on vibrators usually does not do too much for me, so that’s why I started it out on high. I inserted it and felt the rotation for a minute. Then I inserted it a little further so the vibrating part was on my clit. That was the good part! The vibrating thing was small yet mighty, although I did have to push it down a little so that there was more pressure. Using this vibrator, I came in seconds!