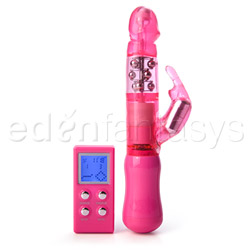 The Doc Johnson IVibe Wireless is not a high quality toy. This dual vibrator, made from phthalate-free TPE/plastic, broke after only being used twice! It does offer a good amount of vibration and rotation, but the rotation slows down or stops if used too roughly or clenched very tightly. Overall, not worth the cost!
Pros:
Good, strong vibration
Customization vibration/rotation
Cons:
Beads slow when clenched
Wire shorted out
Porous material
23A 12 volt battery
Rating by reviewer:
1
useful review
The IVibe is made of translucent, colored phthalate-free TPE/plastic. It is a somewhat porous material that should not be used without a condom if you're sharing it and cannot be disinfected with boiling water, as it will damage the material. It can be cleaned instead with mild soap and water or toy cleaner. The toy is also waterproof, so you can use it in the shower or bath. The plastic remote is not waterproof.

The toy takes 3AA batteries, but the remote takes one 23A 12-volt, which is included. I personally didn't realize it had a 23A 12-volt or I might have considered purchasing something with easier-to-find batteries. Also, the remote feels sort of fragile and cheap, but the toy seemed sturdy enough. It looks like most dual style vibrators, with a long shaft and vibrating attachment. The vibrating attachment offers seven different vibration patterns, including three different constant speeds and four pulsing speeds. The shaft itself has rotating beads with four different rotation patterns. The vibration is pretty quiet, but the rotating beads are pretty loud. Certainly not a toy to use in secret!

The base has no buttons or controls, which is a plus if you find yourself accidentally pressing around on the base during play, and is perhaps a negative feature of the toy if you lose the remote! I also found it strange that the remote times how long you've been using it, which seemed sort of like a waste of battery power and made my partner giggle a bit.

The Doc Johnson IVibe Wireless arrived at our house in an attractive package and we were really excited to try it out. I used it on my own and it was great. It did most of the work for me, so to speak. The beads did slow down if I did any heavy thrusting or pushing, so I ended up only using it in the beginning and turned it off and just used the vibration toward the end.

When I used this toy with my partner, it stopped vibrating. Something inside the toy seemed to have shorted out and the vibrating attachment no longer vibrates. If I wiggle it around and hold it just right, then it works. But it’s so frustrating! I'm already contacting Doc Johnson to see if it’s covered under warranty. Be sure to fill out the warranty on any toys you buy that offer them. Most companies do have warranties and are more than willing to help you out if your toy is damaged through no fault of your own.

I am incredibly disappointed in the Doc Johnson IVibe Wireless Rabbit. I have not yet found a dual vibrator that suits my needs and, quite sadly, this one doesn't either.
Follow-up commentary   I still don't like it 16 days after original review
I wish this had worked more than twice, but the external stimulator (which is what shorted out) is just too important a piece of a dual use toy to keep this when only the interior vibration worked. Also, Doc Johnson customer service never responded to our multiple inquiries, and we ended up having to remedy the situation through EdenFantasys instead.
This content is the opinion of the submitting contributor and is not endorsed by EdenFantasys.com

My IVibe Wireless tags
About author