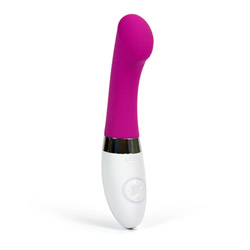 The Gigi 2 is great for external stimulation even though it's being advertised as a G-spot vibrator. Don't get me wrong, it's great for that too, but my end-of-a-long-day go-to is external stimulation. With the Gigi 2, I can be done, up, and running, in less than five minutes.
Pros:
Design
Shape
Cons:
Control buttons layout
Rating by reviewer:
4
useful review
To date, my favorite sex toy so far, my never-fail go-to, my it-lives-under-the-pillow-on-my-bed-because-why-put-it-away toy, is the Gigi 2 by Lelo. Part of what I like about it is its sleek good looks. I'm a visual girl and design matters to me. I know some might value practical function over everything else, but if a toy doesn't look pretty, I just can't love it. Not in that I-never-want-to-be-separated-from-you way.

I could say I like the variable speeds on the Gigi 2, but normally I just keep it on high. If you like vibration patterns, this toy has many to choose. The overall shape of the Gigi 2 is well thought out; it feels nice in your hand, not just in your crotch, and it is easy to hold. Gigi 2's business end has a flat, forward-tilted head; the face curves outward slightly and the edge is seamless.

What's not great about the Gigi 2? It's got some kick, but it's not the highest powered toy out there. If you're looking for something with girth, this isn't going to be it. The most annoying thing about the Gigi 2 is the control buttons: Left and Right are for speed levels, Up and Down are for patterned vibrations. When I'm using the toy on my own, the layout usually isn't an issue, though it is counterintuitive. The problem occurs when I'm using the toy with a partner; things are getting incredibly heated and I can't even remember my own name. I almost always accidentally change the vibration pattern or turn the toy off, and it's so annoying when you're just THAT CLOSE to the magic rainbow. It also involves a lot of swearing and fumbling about, and that confuses my partner because he can't figure out what's just happened. The other drawback is the above-noted lack of oomph. I have two Gigis because I thought the motor was dying on the first one. It turned out I had just gotten used to the vibration and was hoping for something more.
Experience
Since I now have two of these toys, I discovered that they work together like a super awesome rabbit — one internally on my G-spot and one externally. I also discovered that while I hate patterned vibrations for external stimulation (hey, each to their own), they can feel great internally when combined with the steady vibration of a second vibrator on my clit. Given the price of each toy, the two together might be the most expensive rabbit out there. But it has yet to fail me.
This content is the opinion of the submitting contributor and is not endorsed by EdenFantasys.com

My Gigi 2 tags
About author