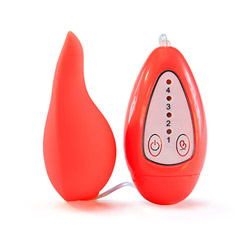 If you like bullet vibes and direst clitoral stimulation, you will like this toy. It is not worth the list price of $35, but if you can get it for the $10.50 that Eden Fantasys currently is selling it for, I highly recommend you add this one to your collection!
Pros:
decent vibrations, nice material, easy-to-use, easy-to-clean, quiet
Cons:
tip can be too firm/painful, not discreet, cord is short, not easy to use with partner, feels flimsy
Rating by reviewer:
4
No votes for this review

When I first received and opened this toy, I really wasn't expecting much. The packaging and weight made it look/feel like every other cheap bullet vibe on the market. It didn't come with batteries, so I had to go scrounge some up. Most battey-operated toys I own take AA batteries, but this one took AAA, so I had to go get new batteries especially for this toy. The site shows the Love Petal (on my screen anyway!) as being a bright red. When it arrived, mine was this impossibly bright neon pink. I can't recall ever seeing another toy this color; I actually REALLY love it! The material is a wonerfully silky silicone that feels amazing to the touch. I wish I had more toys made out of this material!

When I finally put batteries in the Love Petal, I really wasn't expecting much. It has 2 buttons; one moves the vibration speeds up from 1-4, and the other one moves the setting back down. I played with the buttons for a bit, and again, the toy felt like a million other cheap bullet vibes on the market. Frtunately for me though, this toy was a pleasant surprise!

When turned on, the pointed tip of the "petal" flicks. Even on the first (lowest) setting, it moves quite a bit. On the fourth (highest) setting, the tip moves back and forth a goot 1/4" in each direction from its natural position. I'm a direct-clitoral-stimulation girl, so I was excited and ready. With a little bit of lube, I decided to let the very tip/edge of the petal "flutter" on my clitoris on the first setting. That was a mistake. The pressure was so sharp and focused, it was painful. Not trying THAT again! But then I decided to gently rub my clitris with the rounded undersie of the petal's tip, and that felt nice. The vibrations were good; much stronger than any of my standard bullet vibes. I continued rubbing with medium pressure and gradually increased the speed to the max. I was able to orgasm in a few minutes this way, and it was enjoyable. The motion of this toy is painful for me if the pressure is too light, as the movement of the pointed tip is hard to take. But with the right pressure, and using the right spot on the petal, this toy felt great.

I have played with this toy several times now and have orgasmed with it almost every time. I prefer deep, rumbly vibrations (like with the Magic Wand) the most, so I did find the localized buzzy vibrations of this toy to be more difficult at times. The Love Petal is great for people who into the type of vibrations that this toy can provide, but if you need more surface area buzzed in orger to get that big O, this may not work.

That being said, I really love the silky material and how it felt on my skin with lube. This toy is probably best for solo play, as the cord is pretty short, and it can be hard to get the "sweet spot" of the toy in the right place when you are trying to move it between two bodies. My boyfriend didn't like the feel of the petal's tip when I accidentally bumbed him with it either, so this toy is strictly for my use only.

The Love Petal is advertised as being water-prrof, but I have not been daring enough to try it in the shower yet. I am weary of taking corded toys in the bath, but I may make an exception for this one in the future.

The strongest vibrations are felt in the petal's tip, which surprised me! Most bullet vibes I've used that have silicone covers or sleeves tend to have the vibrations in the bullet part, and not really aywhere else. The Love Petal has the strongest vibration and movement at the tip, and mild vibrations at the base bullet portion. The middle space between the tip and bullet base has little to no vibrations that can be felt.

The orgasms I had with this toy were nice, but not as strong as those I get with toys that have deeper vibrations. I experienced better orgasms with the Love Petal than I have with any other bullet vibe, however. I found this toy feels best when used with lube, and with decent pressure of the rounded part of the tip on/aeound the clitoris. I did not like the sensations of the pointed tip itself, and I feel that without lube, you will not get the same glide and movement that this toy can offer.
This product was provided free of charge to the reviewer. This review is in compliance with the FTC guidelines.