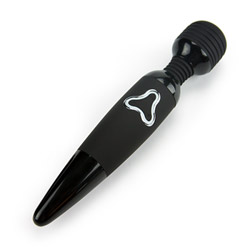 This is great for taking on trips and outings. It's easy to whip out and easy to use. The multiple patterns is a big plus! It's also great for tight overworked muscles. We use it to relax muscles while watching TV. Of course the number one use is if for clitoral arousal.
Pros:
Cordless, Rechargeable, Flexible neck, Multiple vibrating patterns, Available attachments
Cons:
Gets warm after 28 mins,
Rating by reviewer:
5
extremely useful review

The Black Magic Force is a usb rechargeable cordless wand with good power to stimulate and arouse the clitoris. This wand has 7 vibration patterns and 3 levels of power to customize your massaging sessions. It can be used solo or with a partner.

Great for anyone not wanting to deal with power cords associated with powerful wands. Great for sessions where power sources are not available. Great for sessions in the back seat or camping outdoors. Although not stated waterproof on the product page, I did test it underwater. So anyone may use it in the shower, tub or spa.

They also are great for relaxing sore muscles. Not having a power cord to deal with makes this ideal for sore backs, shoulders or any muscles that need some TLC. 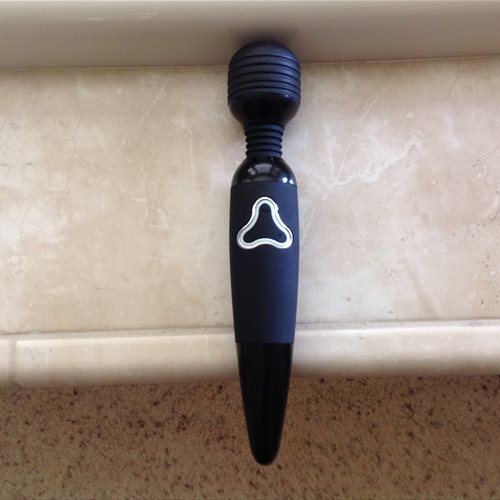 The vibrating head is made of silicone. Silicone is rated a 10 on the product safety material sheet. In plain English, it is safe for your body. If you need to learn about materials and their properties, go here: https://www.edenfantasys.com/info/materials-guide

The body which houses the motor and rechargeable battery is made of hard ABS plastic. The head is firm and has ridges on it. OW has a few wands, and the heads on all of them are firm. This wand has a very flexible neck also covered with silicone.

The silicone head has a very very faint silicone smell. One has to sniff hard to detect it.

Silicone being, hypoallergenic, latex-free, and phthalates-free would be safe for all users.

This is conic-shaped like most wands. It has bulbous head and tapered plastic body. The section one put handles the wand is silicone plated for comfort. It is about 5 1/2" around only so it's easy to hold/handle.

The vibrating head is 1 3/4 " wide, so easy to nestle on the right spot. Corded wands run more than 2 1/4 wide
The flexible neck allows 95% of the rumbling vibrations to be concentrated on the head where it is needed. The body of the BMF barely shakes at all.

It comes in all black except the triangular control panel. This futuristic panel lights up in an ominous blue when on.

The Magic Force looks like an instrument from a Star Wars movie. Perhaps that is why it is named Magic Force. 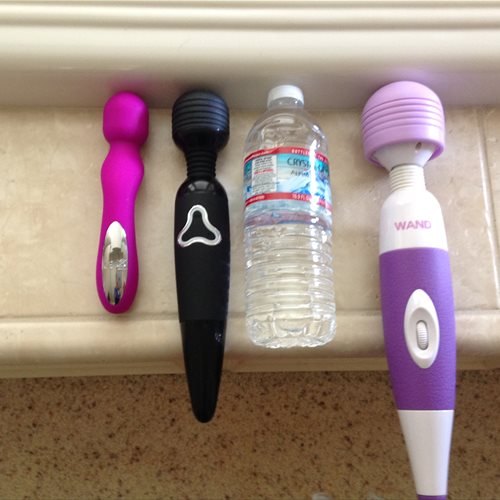 The cordless Magic Force has a futuristic control panel in the shape of a triangle. On the top of the triangle is the on/off. It is depicted by the electric wave design. On the other two ends of the triangle are the increase and decrease power controls. They are depicted by a + and a -. 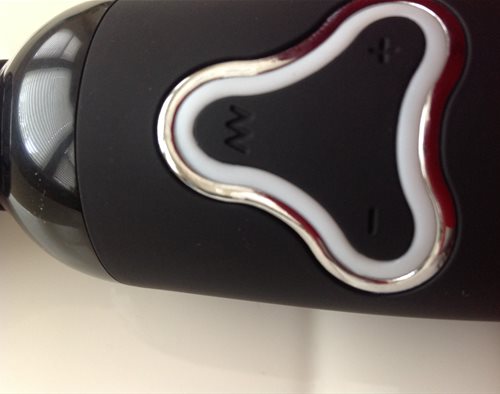 The way the chip works on this is a little difficult to explain in writing. I hope you watched the video attached to this review. There's a demonstration on how it works there. If you viewed it, you may skip the next few paragraphs.

To turn on the wand just press the electric wave pic. The triangle will light up neon blue. Depressing it again will change the vibration pattern. There are 7 patterns. In any pattern you can increase or decrease the power. It starts on low and can be increased to medium, then high. To turn the wand off just hold the wave tab down for a few seconds.

The wand's power will stay on whatever strength you set it on. In other words if you started on pattern 1 and increase the power to medium then change the pattern to #2, it will still be on medium power.

Then whatever pattern one turn if off on, it will start on the next one when one powered on again. So if you turned it off on setting # 2, it will start on #3 the next startup. If one wanted the same setting, ie #1 the next time restarted would have to go all the way around. Also after setting #7 it will pause and light will stay lit.

There was not a set of instructions or guide included with our wand.
This is what we discovered as to settings: and remember all 7 can be set to low, med or high power.
1) Steady
2) Stutters
3)Purrs repeatedly
4)Purrs,stutters,purrs
5)Pulses 1,2,3,4,4
6)1,2,3,purr,purr
7)Fast vibe, rumble
8)Pause, light stays on

Although it has good power, it can not be heard outside our bedroom door.

To Charge : Remove the bottom cone by twisting clockwise. In the very center of wand plug included pin. Attach USB to computer or adapter. While charging the light will blink. When fully charged the light will stay lit until unplugged. 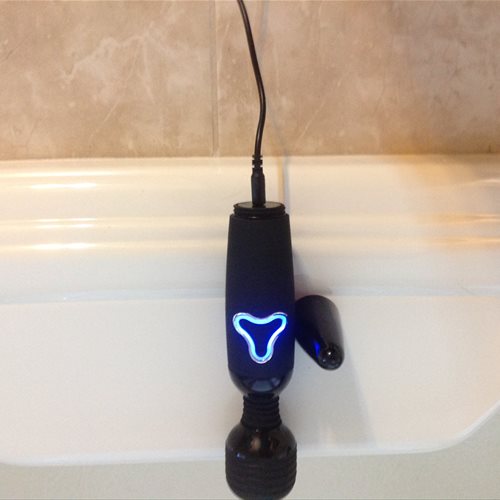 Our Black Magic Force came charged. A full charge run on high can last 40 mins. When the power is very low, the wand will stop functioning. When fully discharged it will take 2 hrs to be fully recharge.

Being silicone and hard plastic this massager is easy to care for. Just wash it with antibacterial soap and warm water. It will attract dust and easily rinse off under the faucet. If you are using silicone lube during play, be sure not to get any on the head of the Magic Force. Ow stores hers in arm's reach in her night stand. We don't have any jelly toys and if did would not let it near any of our other toys.

Packaging was very simple. Just bubble wrap. No information came with it. Since EF always runs specials for wands we got 2 attachments also. 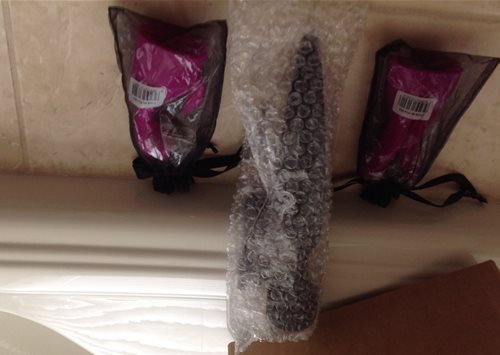 Wands and this one included are great for delivering fantastic O's. Some women can get off with wands alone and certainly when combined with a vaginal toy. Always delivers for OW.

The Magic Wand combined with the Vixen Creations Bandit
https://www.edenfantasys.com/sex-toy-reviews/dildo-harnesses/ow-named-this-one-the-winner or the Eden Bendable Buddy

https://www.edenfantasys.com/sex-toy-reviews/dildos/powerful-waterproof-silicone-vibrator-ten-patterns-to-boot-at-a-fantastic-price puts her over the top. We learned to put a throe out before such sessions.

OW (Oriental Wife) enjoyed the Eden Mini Me. She loved that it was cordless. So we got the Magic Force for more power and multiple settings. She said it was much stronger but less powerful than her corded wands. Maybe a 7.5 on scale of 10. The only negative thing she felt was it felt warm after about 28 mins. Pretty same as her corded ones.

What she really really loved was the 2 attachments. Both made her climax multiple times. 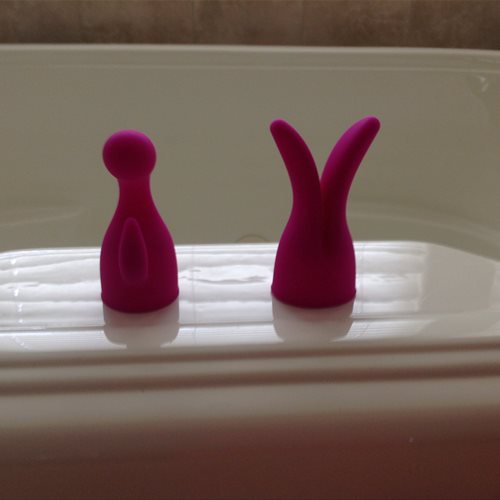 Follow-up commentary   I still like it 3 months after original review
Still a favorite wand of ours. Her: for clit play combined with the Mini Me wand internally. For myself nice to use on the back and shoulders.

Great to not fuss with a cord!
This product was provided free of charge to the reviewer. This review is in compliance with the FTC guidelines.

Reviewed by OH&W, Lovebears (Eden Advanced reviewer) Life will go on with or without us. Enjoy it while you can.
Rank
6.1
wrote 102 reviews
Comments
Make a post
Forum
No discussions yet.
Thank you for viewing Magic force – massager review page!
Top