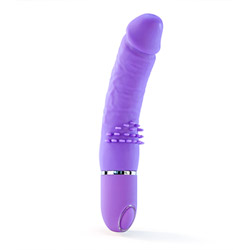 Mine bends somewhat (as it should), but it does not gyrate in the fourth setting as it should. It is supposed to gyrate on the 4th mode, but I have not missed it.The slight bending enables the toy to be slanted toward the G-spot. I use the toy (the G) mainly for the clitoris, because it is not too wide at the end and has the right vibrations.

There is no smell nor taste to the toy. The textures add stimulation. and would be for beginners and advanced users.

The toy is silicone, which is velvety to the touch and the safest material, and ABS plastic, which is used at the control end. It is also waterproof and though it has a seal which is to be shut tightly around water, it cannot be used in the tub, only in the shower and cleaning.

The texture and touch of the material are very pleasing to me.

I really like the design and the slight curve of the G coupled with the rows of bumps. It is a large size with an obvious penis head. I would say the size might be somewhat too much for a beginner.

The toy may be easy to hide, but if ever found it is obvious what it is, so I would not say it was discreet and for me, unsuitable for travel because of the shape.

On the base is an LED light and the one control. The base is also the handle. The button, on the base is the only control the toy has and it's very easy to work. The light flashes with the pattern of the mode. If the toy is running, just pressing the button for 3 seconds turns it off. It does not start on the same mode when turned on again.

The vibrations are located mainly in the shaft which can be bent slightly in the middle for effect.

The flaps which are on the top third could be located lower in order to be sure to stimulate the clitoris.

It is waterproof, but only for cleaning and perhaps the shower.

As with every silicone toy, it is easy to wash, before and after use and use a water-based lube. It is different in that you can use 5% alcohol to clean it.

It is best to store silicone toys in a separate place than with the others. I use a separate drawer for silicone toys, but the box or plastic it came in can be used also. I would not hesitate to use it with other toys as long as it is thoroughly washed after use.

The "Feel the G" came in a brown box and a molded to the toy piece of plastic.

There were plenty of instructions. It takes 3 AAA batteries, which have to be put into the toy in a precise way, and it also says to take the batteries out after every use. 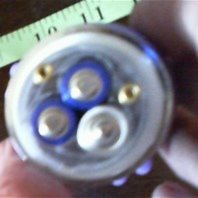 I thoroughly enjoy this toy. I use in the vagina and on the clitoris. It can also be used for most any place that is sensitive.

It's also a very substantial, hardy toy. a good go to toy to have on hand. 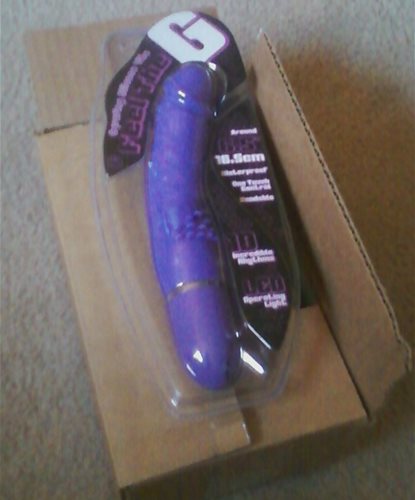 Follow-up commentary   I still like it 19 days after original review
The Feel The G has turned out to be one of my reliable, go to toys. I know that I can count on it for power, and certain other features that it has and the fact that it is sturdy and I don't have to use it "if it works right". I know what it can do and it does it.
This product was provided free of charge to the reviewer. This review is in compliance with the FTC guidelines.