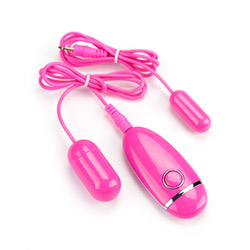 A fun little bullet set with two different sized bullets and an easy-to-use controller. It's charged with a USB and looks like nothing more than a memory stick in your laptop. It might be small but it's got a kick when it comes to vibration power.
Pros:
Two bullet sizes, Rechargeable, Small and discreet, Strong vibrations, Ten vibration settings
Cons:
Loud, Kind of pricey
Rating by reviewer:
4
No votes for this review

This is such a nice little rechargeable set of bullet vibrators. You charge the remote control and plug in either the smaller or larger bullet and use the remote to control them. Both bullets have the same settings and functions but one is about half the size of the other. I personally like to use the larger one internally and the smaller one for clit stimulation. You can only plug in one at a time though.

It charges through a USB and can be charged in a laptop's USB port or plugged into the wall with any kind of USB plug. It charges up pretty quickly and when you're ready to use it, you just have to plug a bullet into the remote and press the power button.

The control and both bullets are made from smooth, hard plastic. The bullets both have a seam running horizontal through the middle of them, but it's a very smooth seam. You can run your fingers over and along the seams and you can really hardly feel them. The remote is also very smooth and just easy to hold in your hand.

Plastic is incredibly easy to clean and it doesn't attract pet hair and lint like some materials can.

This toy has a simple, but nice design. It's a three part set with a controller, and two different sized bullets with a cord like a headphone cord coming out of them. The larger bullet is average sized at about an inch and a half long with a circumference of about the size of a quarter. The smaller bullet is about half the size of the larger one.

Both bullet cords can be plugged into the small remote. The end has a small port to plug the cords into as well as a power button/function cycle button and a small cap to cover the USB when it's not being charged.

The controller is small and fits easily into your palm. It's easy to press the button during use and the cords from the bullets are long enough that you can use the bullets and hold the controller without the cord getting too tight or anything like that.

It's small and discreet and easy to keep hidden. The remote plugged into a laptop and charging just looks like a USB storage device, honestly.

To turn the toy on you need to make sure the remote is charged and that a bullet is plugged into the remote. Nothing will happen if there's nothing plugged into the controller. There's only one button on the controller and you press it once to turn the toy on. It starts on a lower solid vibration setting with the next two presses giving you slightly stronger vibrations. Then it cycles through seven other various speeds and pulsing settings. There is a total of ten different settings.

To turn off the toy you just hold down the button for a few seconds and the toy shuts off. You can tell it's off because the light behind the button will shut off.

This is a very easy toy to take care of. You can clean the bullets off with some soap and warm water or toy cleaning wipes. The cords are easily wrapped up with the bullets and you can throw them into a baggie with the remote. It's super easy to just keep the whole set together and ready to go.

You can use water, silicone, or oil-based lube with this toy.
Follow-up commentary   I still like it 5 months after original review
This little set of bullets still works fantastically. I usually don't use bullets often but sometimes when I'm trying to find something "new" that I haven't used in a while I'll pull these out for some teasing and things like that. I do really love that it's USB powered too because I don't have to run all over the place trying to find whatever size battery I'd need.
This product was provided free of charge to the reviewer. This review is in compliance with the FTC guidelines.

Reviewed by Princess-Kayla ♥ (Eden Writer) Not a shred of evidence exists in favor of the idea that life is serious.
Rank
6.6
wrote 201 reviews
Comments
Make a post
Forum
No discussions yet.
Thank you for viewing Rechargeable play pack – sex toy review page!
Top