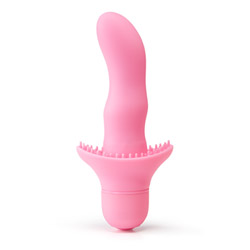 Aside from a very rare issue turning it on, they Charm G is a simple and easy-to-use g-spot vibe. I would definitely recommend it as a nice, basic vibe to a beginner or really anyone, although people who are advanced or like more intense vibrations would probably not find much here. The combination of it's strong vibrations and fairly quiet sound make it great for a college dorm or shared housing. Although I have to give it an average rating, basic is far from a bad thing!
Pros:
Easy to use, Decent variety of settings, Sturdy and consistent vibrations
Cons:
Nubs along base don't channel vibrations well, Occasional delayed response to button presses/power o
Rating by reviewer:
3
No votes for this review

The Charm G is made from smooth, pink silicone, with the exception of the 'nubs' around the base which provide a bumpy texture (more on that later). It's a fairly rigid/sturdy toy with little to no give in the tip, although the base has a decent amount of flexibility so you can easily adjust it for clitoral stimulation. The texture is definitely fine for beginners, and I didn't personally notice it enhancing or detracting from the experience.

I did notice a slight plastic smell on the toy when I first opened the package, but this was not intense and went away after about two rinses with warm soap and water.

The Charm G's design is similar to other G-Spot vibrators: a shaft with a slight curving at the head for G-spot stimulation. It also has a nice 'bump' in the shaft at about the midpoint for a little variety when used vaginally. It's slightly longer than your average pen when you count the base of the toy, but the insertable length is just under a pen length. The insertable portion is about 4" in circumference, so my hand can close comfortably around it, making it just right for my needs. 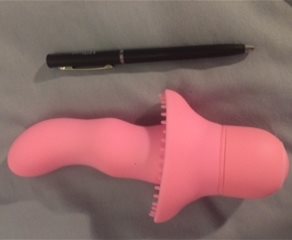 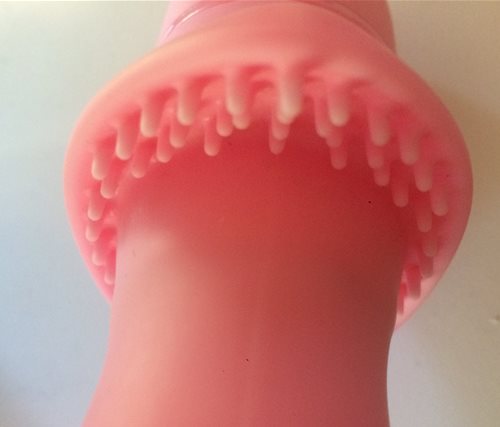 They look like little raised teeth or bumps around the toy's base and are soft silicone. These nubs, coupled with the shape and width of the base, are meant for stimulating the labia/clitoris when the shaft of the toy is being used vaginally, but unfortunately, they don't channel the vibrations of the toy particularly well and I don't personally notice much textural difference or sensation from them. Perhaps that same interesting softness and give is the cause?

All in all, it's slightly larger than some beginner G-spot vibes I've seen, but I think it would still be a good toy for a beginner because it's so simple. It's not so big as to be intimidating and easy enough to tuck away when not in use, but is just big enough that it's not particularly discreet or easy to travel with.

For such a simple looking vibe, it has some surprisingly strong vibrations! It has 3 basic speed/intensity settings and a few additional pulse patterns ranging from a slow and more gentle pulse to a fast and fairly intense pulse. The toy is turned on & off by holding the button on the end of its base, which also cycles through the vibration patterns with each subsequent press.

The fact that the Charm G is fairly rigid means that the vibrations travel well throughout the shaft, but not in such a way that my hand was getting numb from holding the base, which is always a plus. It takes two AA batteries, and gets quite a bit of mileage out of them, as it took a few hours for it to feel like the vibrations were losing intensity or puttering out.

For such consistent (and on some settings, downright strong)vibrations, the toy is actually pretty quiet! Under the covers you can hardly hear it, and even outside of the sheets I can't hear it outside of the room I'm in.

I have not submerged it as the instructions stated not to, and the simple o-ring closure on the base that secures the batteries in place does not appear like a water-tight seal to me. I am also mindful of this when I rinse the toy, and check that it hasn't leaked into the batter compartment (thus far, this has not happened!)

I will note something that I feel is probably just an individual issue or defect with my toy, in that it sometimes is finicky about being turned on. A few days after my initial use of it, I needed to remove and reinsert the batteries a few times before it would power on. I noticed that sometimes, after taking a few attempts to power on, that it would be on a random setting before puttering out, like a false start. This is a kind of freak occurrence though, as it by no means happens every time I try to turn the toy on. Still, it would be nice if it didn't do this at all, as it definitely detracts from an otherwise pleasurable experience when you have to cope with false starts like this.

The Charm G is surprisingly easy to clean, something which I thought would be a challenge given the nubs on the toy's base. The nubs have enough give to them, however, that they are easy to wash and water and lube don't get stuck between them in the process. Being a silicone toy, it should be washed with soap & water, or a silicone-friendly toy cleaner. It is shower-safe, so washing up in the sink or shower after works out just fine! Wrapping it in a thin cloth and storing it in a discreet box has worked out so far, and given that it's not a particularly large toy, it would be fairly easy to find a new spot for it if I had to move things around here. 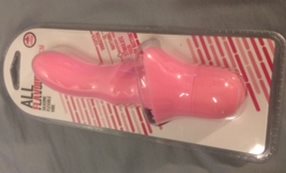 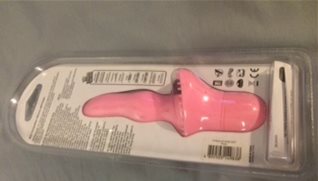 It came with basic instructions regarding the care and cleaning of the toy, which noted that the toy is waterproof for shower or cleaning purposes, but should probably not be submerged.
This content is the opinion of the submitting contributor and is not endorsed by EdenFantasys.com