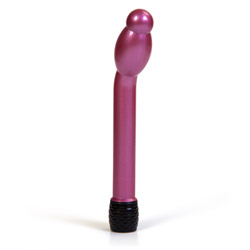 This toy is very petite and even though it has weaker vibrations than most of our other toys, it targets them by putting them right where you want at the end of the wand-like toy. This results in a toy that is successful enough to make my girlfriend unable to coherently describe enjoying the toy.
Pros:
Small
Targeted vibrations
Cons:
Difficult to use buttons
Rating by reviewer:
4
extremely useful review

This toy is great for personal play or foreplay. The toy's shape is designed to be used vaginally and apply pressure on the female g-spot during use. Also as the head of the toy has a variety of vibrations, which will be discussed later, this allows the vibrations to be directed onto the g-spot.

We've used this toy a couple of times as part of foreplay with good results. My girlfriend will be adding her perspective on the toy in the experience section of this review. But it's nice due to its size, that it can easily be stored in our bed side table for easy access when we need something to play with if it's taking me longer than normal to get hard.

The toy could be used externally, used to vibrate the penis during foreplay, or held against the clitoris for clitoral enjoyment. But the best usage of this toy is still focusing on the g-spot.

The toy is made of a smooth hard plastic rated an 8 on EF's safety scale. It seems to be a low quality plastic; however, it seems to be of a food-grade material. Plastic is usually slightly porous, so if you are sharing this toy with others you should definitely use protection as it can't be fully sterilized. I would also keep an eye on it to make sure nothing is growing on it and clean it thoroughly when done using if you aren't going to use protection with the toy.

The toy's plastic doesn't have any smell/taste that was noticeable.

The toy doesn't really have any texture; however, it does have a little knob on the internal bead that is inserted. This offers more directed pressure on the g-spot during use.

The toy is slim as its name implies. It is basically a g-spot wand toy, with a slight bend with an enlarged ball at the end of a slim cylinder. The enlarged ball is designed to vibrate and apply pressure to one's g-spot when inserted. The slim cylinder acts as a handle while in use and allows you to move it in/out or apply more/less pressure on your g-spot during use. They added a small ball on the large ball end of the toy to allow even more directed pressure.

At the end of the handle is a cap that you screw off to insert the batteries and on the end of the cap are the two buttons you use to turn the toy on/off and cycle through the vibration modes, which will be discussed later. The two buttons are really the worst designed part of this toy, for a variety of reasons. The first reason is that as you can see below, the buttons are marked; however, it's really hard to read that one says mode and the other says on/off. 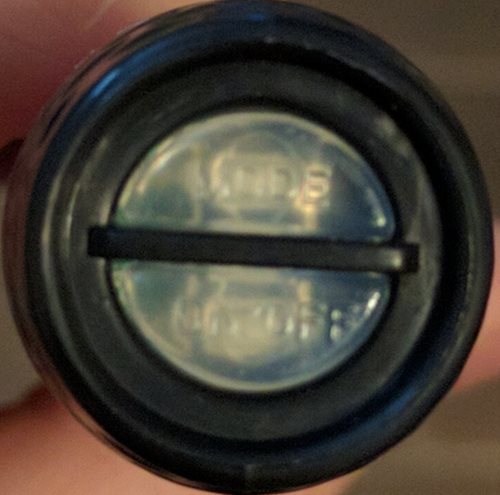 Second, once the toy is in use it's not in a position you can read the button text if using solo. And even if you are using with a partner it will be difficult to read the buttons, which basically means either keeping your finger on the buttons to make sure you know which is which or trial/error during use. This means you could turn the toy off when you want to change the mode or change the mode when you wanted to turn it off. This isn't a huge issue, but can be slightly annoying and really is the worst part of this toy's design.

It was a little difficult to figure out how to get batteries into this toy, as no instructions came with it. But there is a plastic sleeve inside the toy that comes out that you insert the batteries into and then slide back into the toy.

The toy has no memory so when you power it on - it will always start back at the slow constant vibrations. Vibrations 4-7, basically alternate fast vibrations and no vibrations with different patterns that almost seem like Morse code.

We currently store the toy in the bed-side table for quick access since the toy is so small and you never know when such a toy might be needed during foreplay.

The toy came in the shipping box inside of a transparent plastic bag. It came with no instructions on use, which is why figuring out how the batteries went in was tricky. Honestly, I couldn't figure out why it wouldn't power on as I didn't even realize it needed two AAA batteries until the battery sleeve slipped out while I was shaking the battery out. 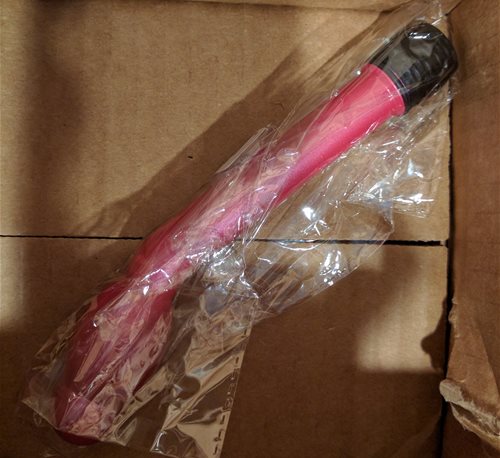 So worth mentioning the first toy we got had issues with its buttons, resulting in it not turning on or would randomly turn on. EdenFantasies was amazing at sending us another toy quickly to replace the defective one. The replacement has worked as expected, but thought it was worth mentioning that EF's customer support for receiving a defective toy was excellent.

So I tried to get my girlfriend to write up her experience with this toy; however, the best I could get from her was that it left her fuzzy and unable to coherently describe the experience. She did indicate she enjoyed the toy, even though she couldn't really explain the experience.
Follow-up commentary   I still like it 2 months after original review
We don't use this much, especially as we have more powerful/feature rich toys; however, for what this is... it's good toy.
This product was provided free of charge to the reviewer. This review is in compliance with the FTC guidelines.