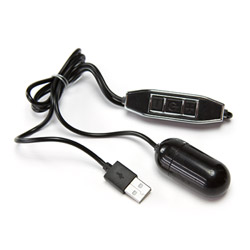 It can be used anywhere there's a USB charge port.

The control pad has textured buttons that make it easier to feel which button you're choosing.

There are five vibration patterns from a steady vibration to staccato bursts to an escalation pattern of low to high intensity. Each of these patterns can be used on five different intensity levels. The lowest level is great for warming up, and the highest level is extremely powerful.

The control pad is located a bit too far up the cord (too close to the bullet) for my preferences; I'd personally like some more room to work with.

I really liked the different functions and the fact that each one can be customized with five levels of intensity.

The hard plastic shell is compatible with water, silicone, or oil lubricants.

I always recommend storing sex toys in small fabric bags to protect from dust and to keep them from touching each other. This toy will not degrade if in contact with other toys of the same material, but silicone and PVC toys do react with each other, so it's best to keep them all separate, in my opinion.

Reviewed by Annabel Lee (Eden Advanced reviewer) Adventure is out there!
Rank
5.2
wrote 5 reviews
This review was edited by
Comments
Make a post
Forum
No discussions yet.
Thank you for viewing Eden uBullet – usb bullet review page!
Top