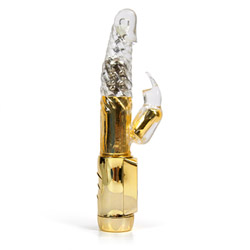 Sweet sensations with a few complications

This rabbit works well for clitoral use, but it is difficult to use it only externally. It works best when used for both external and internal stimulation. However, I found it difficult to use to stimulate both my G-spot and my clitoris at the same time. I had to hold the rabbit in a different position for each one, I found it worked best with a sort of rocking motion. That said, it still managed to give me some amazing orgasms once I figured out how best to use it. This rabbit can definitely be used with a partner, but also works really well for some alone time.

I liked the texture of this vibe very much, it has a soft and flexible outer clear layer, but a very hard core which means it can provide wonderful pressure, while still being flexible enough that you can make it stimulate your G-spot.
The shaft has spirals that felt nice, but my favorite part of the vibe was the flared head, it really added to my enjoyment. With a little bit of lube, this slides in wonderfully, but has enough texture that you really feel it going in.
There is no distinct smell to the rabbit, it just smells clean. I didn't really like the taste of the rabbit, but it wasn't a particularly offensive taste.

The shaft length was great, wonderful for beginners, but this vibe does not stay in by itself. If you let go of it, it will slide out. This shaft is not curved, but since it is flexible, you can bend it however it pleases you best. There is no change in the girth, it stays the same thickness throughout. It may be difficult for true beginners to insert without lube, so I suggest using plenty.
The clitoral stimulator is shaped like a bunny with two bendable wary that you can place where they will give you maximum stimulation. However, they will quickly snap back to their original shape once nothing is holding them.
This toy is not discreet at all. If someone sees it, they will know what it is. There is no off button for travel, but you can take out the batteries and that will make sure it does not turn on by itself if you travel with it.

The vibrations came from the clitoral attachment, and didn't travel much through the shaft. You could sort of feel the vibrations in the shaft, but they were definitely concentrated in the rabbit clitoral stimulator. I did not like the rotating function, while it rotated fine externally, once it was inside, it did not rotate much, if at all. Additionally, sometimes the motor would completely turn off when it was held close to upside down. So you can only use it well held right side up, which was very annoying.
The worst part about this toy was that it is not actually waterproof. I took it into the bath with me, and was afraid that it would not work so barely let is spend any time in the water, and it worked fine. However when I tried to use it the next day, it did not turn on, and there was water with the batteries. So it is not really waterproof.
The noise was not bad, you can most certainly hear it in the same room, but through a door it can't be heard.
the controls were very easy to figure out, there are up and down buttons. It has five vibrating patterns. The first three are simply an increase in intensity, and the last two are different patterns. I prefer the plain vibrations, but the pulsating functions were also good. The vibrations were great, the lowest setting was not too intense, but the highest one was too high for me, so probably great for some other people. The best part is that you can choose whether you want the clitoral vibrations to be direct or indirect by where you place the rabbit ears.
It didn't go through the battery too fast which was a pleasant surprise.

This toy is easy to clean, I have a toy cleaner, but you can also just use antibacterial soap and water. You have to be careful to clean between the spirals though. There are a lot of ridges that you must be careful to clean. It does attract some lint, so it is best to store it somewhere where there is not too much dust. I store it in a box with all my other toys. Since this has a motor and, as I mentioned not completely waterproof, do not boil it or use your dishwasher to clean it.
This product is waterproof enough that washing it under water is not an issue, so you can rinse all of it.

This toy came in a plastic clear bag, so the packaging was not that nice. I would recommend re-wrapping it if you are giving it as a gift. It came in a very discreet package, but once you opened it, you could see the toy straight away. So do not open this in public. This toy did not come with any container to store it in, which is a shame, and it did not come with any instructions. However, it is pretty easy to figure out so that was not a problem for me.
This content is the opinion of the submitting contributor and is not endorsed by EdenFantasys.com