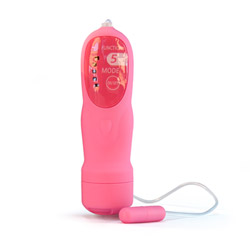 The Mini Slim Bullet is a fantastic addition to any toy box. Despite the vibrations not being ideal for some uses, for me I find pleasure in using it in other ways. The variety of strong vibrations is great for any toy user that enjoys buzzy vibrations and the fact that it's waterproof just makes it that much better.
Pros
+ Waterproof
+ Stong
+ Memory
Cons
- Vibrations are too buzzy
- Seams worry me over waterproofness
- Only comes in pink
Rating by reviewer:
4
extremely useful review

The Mini Slim Bullet is best used for pinpoint stimulation. You can use it on any sensitive erogenous zone, including but not limited to, clit, inner thigh, labia, toes, ears, nipples, and so much more! I find that the Mini Slim Bullet is too strong and buzzy to use on some sensitive areas, but more on that later. This toy has 5 different functions: 3 vibration strengths and 2 patterns. Considering the different functions to choose from, this toy would be great for any user looking for strong, buzzy vibrations.

My husband and I use this toy for foreplay, but it can be used during sex as well. The toy is very slim and slips nicely between the lips. I have slightly large lips, so they hold the toy in place while my husband and I engage in intercourse. The wire is just long enough that I can control the vibrations in missionary or cowgirl, we haven't tried it in doggy, but I think gravity would be a problem with that position.

The Mini Slim Bullet (the bullet and controller) is made with hypoallergenic, latex and phthalate-free plastic or as stated on the product page ABS PU coated plastic. This material rates a 7 on the Eden scale, out of ten. When a sex toy is made out of plastic it is usually rigid with no give and has a very low chance of being porous.

There is no smell or taste to the plastic that this toy is constructed with. The bullet itself is very smooth, except for the seam that runs across the middle of the bullet. I personally, cannot feel the seam when in use, but I can definitely feel it with my fingers. The wire running from the bullet to the controller is coated with malleable plastic-like insulation. There is no drag on the material of either the handle nor the bullet.

The bullet itself is 1.125 inches long and only 1 inch around. The controller is only 3.5 inches around at its widest point and about 4 inches long. The cord is 24.5 inches long, this can be problematic when playing in certain ways, but for the most part, isn't too bad.

The handle looks like it's supposed to be ergonomic, but it is fairly small. Even my tiny hands can't hold it comfortably for too long. Because it is so small you can reach the buttons with either your pointer finger or your thumb. The bullet is small enough that it rests between my lips easily and stays put in certain positions, as mentioned above.

Another perk of the toy being so small is that it is easy to travel with. Merely pop the batteries out, put the toy in a bag, and viola! It's easy to hide in luggage and won't accidentally turn on if you take the batteries out. Don't leave it laying out, though, unless you have a vivid imagination and are good at coming up with stories - this toy is not discreet. While it doesn't look like some more vulgar sex toys, it's obvious that it only has a couple of uses.

The Mini Slim Bullet has two buttons and 5 functions. The buttons are labeled for ease of use. The bottom button is the on/off button, and the top button is for the functions. They aren't really beveled or anything of the sort making them hard to find during play. The on/off button is simple and easy to push. The functions button, on the other hand, takes a firm push that gets some taking used to if you aren't expecting it to be hard to use. There have been a couple of times that I have pushed the functions button and received no response from the toy.

The package for this toy says that it is waterproof, so after playing with it for a bit, I took it in the shower. Due to the seams on the bullet and controller, I was scared of water getting into the inner workings. Thankfully, this did not happen. While I did not completely submerge the toy in water, I did hold it under the stream of the shower and cycled through the functions. It performed great and still worked like new the following day!

The box that the toy comes in doesn't include instructions for washing, but because the toy is made with ABS PU coated plastic, I know how to care for it! You can clean this toy with mild soap and water or a toy cleaner of your choice. You can also use a 10% bleach solution for sterilizing the toy. Considering that the toy rates a 7 out of 10 on the Eden scale, I would only suggest sharing this toy with partners that you have fluid bonded with, just as a safety precaution.

I simply remove the batteries and toss this toy into one of the many cloth bags that I have and it goes into my toy box. It is suggested that you remove the batteries so that the toy doesn't accidentally turn on and run the batteries dead. If you don't have cloth bags that you store your toys in, you can keep it in the box and plastic shell it came in or just toss it into your toy bag. If you want to keep it from getting tangled up with your other wired toys, I suggest loosely wrapping the wire around the controller or using a bread tie to secure it.

This toy can be stored with any other materials, although I suggest keeping it away from jelly toys as they tend to bleed their colors onto other toys. Don't store it directly in the sun, either, as this could cause discoloring or the inner workings to malfunction. Finally, this toy can be used with any silicone or water-based lubricants.

I mentioned above that "I find that the Mini Slim Bullet is too strong and buzzy to use on some sensitive areas" and I would like to touch on that. The Mini Slim Bullet is a powerful, with a lot of buzz behind the vibrations. Using this toy on my nipples felt like the toy was 'biting' me, for lack of a better word. Likewise, on high, using just the tip of the bullet, it was 'bitey' on my clit as well. I, personally, do not like buzzy vibrations as the sound reminds me of bees and when strong enough the vibrations can feel like a sting. This toy was great for clitoral stimulation and getting off quickly, but I would not use "just the tip" of this toy because of the strength and type of vibrations it emits.
Follow-up commentary   I still like it 2 months after original review
This adorable little bullet still makes its way into my play time frequently. It's very strong and isn't too bad on batteries. I haven't had any issues with it and the waterproof quality has held up.
This product was provided free of charge to the reviewer. This review is in compliance with the FTC guidelines.