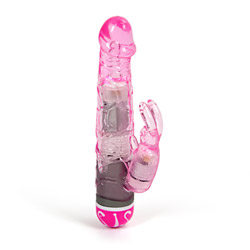 Two Motors are Better than One!

This non-intimidating rabbit vibe will be perfect for those who like small, squishy toys with cute designs and who like a variety of vibration patterns. However, it is difficult to find a condom or cover that will fit comfortably over a toy this small, and the placement of the clitoral attachment may not suit all bodies. Some users may find the toy too small. Keep in mind that it's not waterproof, as advertised.
Pros:
Inexpensive for a rabbit vibe, cute
Cons:
TPR, not waterproof as advertised, not very compatible with my body
Rating by reviewer:
3
extremely useful review

The exposed parts of this toy are made from TPR, which has a rating of 7 on EF's material safety scale. I used it without any type of barrier (such as a condom or toy cover), and the TPR started to irritate my vagina after a while. There was no long-lasting pain or injury, but I did not enjoy the temporary burning sensation. An obvious way of avoiding this would be to use a condom over the toy. However, this toy is too small for the condoms I have! With that being said, this product is hypoallergenic and latex and phthalate free.
I really like how squishy the head of the toy is. If you enjoy squishy toys, you will probably enjoy how this one feels. However, the remainder of the toy is cheap plastic with TPR covering it. The TPR is still squishy and feels okay, but you can also feel (and see, because of the TPR's translucent quality) the plastic and motor underneath. The operational buttons are also covered by the TPR covering. They are visible, but since they are covered, you can't feel them. Unless you memorize where the buttons are, it's very inconvenient to try to change settings while you are using the toy.
The insertable portion of the toy is interestingly textured. Imagine a giraffe print where the outlines of the giraffe's spots are raised - that is what the textural pattern of this toy resembles. However, I barely noticed it while the toy was inside me. The head protrudes a bit, which was noticeable while using the toy.
The body of the little vibrating bunny, that functions as a clitoral stimulator, has a very slight texture all the way around. I think it's supposed to look like fur; more aesthetic than functional. The inside tops of the bunny's ears have eight little raised dots on them, which I imagine are supposed to add stimulation to whatever area they touch, but I did not notice them at all - probably because the touch of the ears is so light in the first place.
The battery cap, located at the bottom of the toy, is not made of the same material as the TPR cover that makes up the majority of the toy. It is hard, like plastic, with a tiny bit of give, as though it has some rubber in it as well. The material of the cap is smooth but resistant enough to make it easy to screw off and on.

Use this toy with silicone or water-based lubes.

The Dual Motor Mini Rabbit consists of two parts - a penis-shaped vibrator and a rabbit-shaped clitoral attachment. The rabbit is attached about 5 inches down the shaft of the toy. The pink TPR covering the toy is see-through, allowing you to get a peek at the inner mechanics of the toy. The entire toy is 7 inches long, and can be inserted up to 5 inches. The shaft is 1 1/4 inches in diameter and 4 inches in circumference. "Mini" is a very appropriate name for this toy.
Here is the size of the toy in relation to my hand. As you can see, nearly the entire toy fits in my hand. 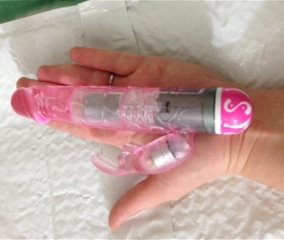 I think the design of this toy is very cute. I love the translucent pink, the mini size, and how the cute little bunny looks like it wants to give your clit a hug! 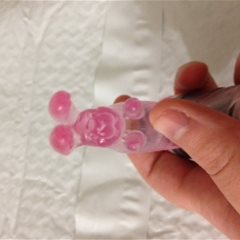 One thing I do not like is the seam running down the length of the shaft. I couldn't feel it when the toy was inside me because TPR is very soft, but it's not very nice to look at.

The motors in the rabbit and in the shaft work simultaneously. They produce they same vibration patterns at the same time. The vibrations from the shaft seem weaker than the ones that come from the clitoral attachment. The vibrations are felt most weakly in the head of the toy.

This toy is supposed to be waterproof, but it's not. The battery cap does not fit the toy very well - there are cracks through which water can easily get in. I would not recommend submerging this toy in water, and just to be safe, take the batteries out when you clean it.

Because of its size, this vibe is quieter than most other, larger rabbit vibes of similar design. On its highest setting, it can be heard through a blanket but probably not through a closed door. The vibrations are much quieter when the toy is inside you or if you have a hand around the shaft.

I find this toy pretty easy to care for. It can be washed with soap or toy cleaner and water. Like I said before, I recommend taking out the batteries before cleaning, because the battery cap is not sealed very well. When cleaning, make sure to get in the ridges under the head, and all of the nooks and crannies of the rabbit. Do not boil!

TPR, which makes up the majority of this toy, is compatible with water-based and silicone-based lubricants.

I'm currently storing the toy in the package it came in until I find something better. The material of the toy picks up lint, so keep that in mind when finding a place to store your toy. Also, TPR is porous, so use condoms (if you can find ones small enough to fit this toy!) or toy covers when sharing.

I'm not sure how this toy compares to other rabbit vibes, because I have never used another one, but I wasn't very impressed. It is cute, but the TPR irritated my insides and the position of the rabbit didn't line up with the distance between my vagina and clit, rendering the toy pretty useless for me. However, I do enjoy the variety of vibration patterns and may continue to use this toy as a basic clitoral vibrator.
Follow-up commentary   I don't like it anymore 14 months after original review
Nothing bad had happened to the toy that led me to not use it anymore, other than the fact that cleaning the nooks and crannies was a hassle; I just moved onto bigger and better things. I'd still recommend this toy to people who are curious about rabbit vibes even though it's no longer at the top of my list.
This product was provided free of charge to the reviewer. This review is in compliance with the FTC guidelines.