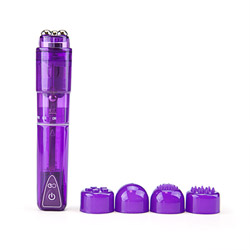 Pocket rocket with attachments by EdenFantasys

Updated Version of your Average Vibe

The main added feature is the power button. Your traditional pocket vibe will have a simple "twist on/off" feature which allows you to open the vibe to change the batteries, power it on and power off. Adding a power button makes the vibe much easier to power down one handed, as the twist feature made it so you would have to use both hands to power off. You do have to hold the power button for a few seconds before it turns off completely, cycling through to the next setting in the process. So it isn't a fast off and could possibly be heard if you were to be interrupted. Adding a power button also helps prevent the vibe from being turned on or off accidentally if you get too enthusiastic with it during use or if it gets jostled around during travel.

On top of being able to turn the vibe off and on with the push of a button, Vibrant adds not only three different power levels but 7 vibration patterns, making for a total of 10 settings. In the past you were lucky if a pocket vibe had more than one power level! Upon powering on, Vibrant will first cycle through the three power levels, beginning with a low but pleasant vibration and gradually building up to a deep and intense buzz. I did notice that the jump from the second power level to the third seems a bit smaller than the change from the first to second settings, which may be a tad bit distracting to some but isn't a deal breaker in my mind. After the three power levels come some different patterns which to me seem a bit random and don't really do anything for me. The packaging includes a visualization of these patters, which vary from a simple morse code style pattern, to a few roller coaster patterns, and what I would compared to head shaking during oral, which was rather amusing on the trial run! 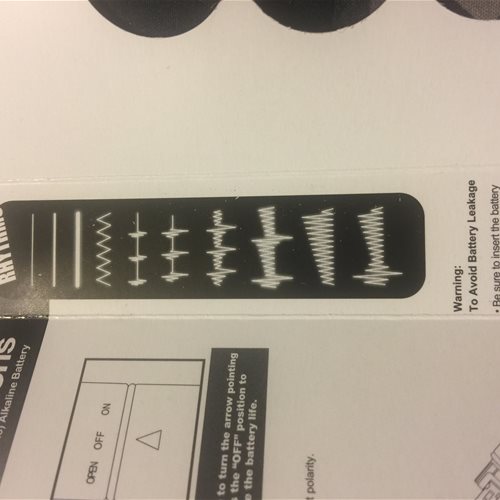 Like most pocket vibes it comes with 4 interchangeable heads which include your typical smooth and various spiky style heads. The spiky heads seem a bit exaggerated in my opinion while another of the raised texture heads, which looks similar to the bumps on a lego block, is very slight and can hardly be felt during use. The heads all feel to lock on fairly tightly, so there isn't any worry about them suddenly flying off during use but I'm curious to see how they hold up over time as sometimes they can start to crack resulting in a loose fit.

As Vibrant is water resistant it isn't just shower friendly but easy to clean, should you manage to get any lubricants or bodily fluids on the handle bit and not just the heads. Since it is made out of plastic a quick wash with soap and water or your favorite toy cleaner is all you need. The rubber o-ring on the vibe seems to create a good seal and the body doesn't turn from on/off to open very easily so I wouldn't be too concerned about it coming open or leaking during cleaning or shower use, but I'm skeptical on how it would hold up to being fully submerged. I haven't tried using it in the tub myself yet but will try to do so for a follow-up review.

There are still a few downfalls to the Vibrant that I seem to find in all pocket vibes. One being that it is super loud! Even being under the covers it can still be easily heard in another room if the door is open. In a quiet house I imagine it could be heard through closed doors as well. Definitely not discreet if you have roommates, children or live with your parents. The second downfall is that the vibe needs to be held straight out from your body in order to use the interchangeable heads, making it awkward during partner sex. The vibrant is definitely more of a solo play toy although it could potentially be used during foreplay for teasing or sensory play.

Overall the Vibrant would be a good beginners vibe as well as a pretty good addition to a more experienced users toy chest and shells out some pretty good bang for your buck. I would not recommend it for anyone looking for something quiet and discreet however, as it gets really loud really fast.
This product was provided free of charge to the reviewer. This review is in compliance with the FTC guidelines.