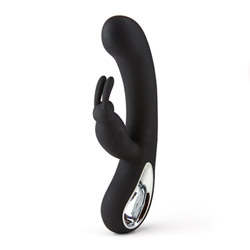 I would 100% say this item is worth it, as it is one of the strongest rabbits I've tried and has a ton of different vibration patterns. Plus it's just darn cute!
Pros:
The motors of the rabbit and internal vibrator can mirror each other or be in unison. AMAZING.
Cons:
The on/off buttons and change mode buttons feel the same so if you're using it solo, take caution.
Rating by reviewer:
5
No votes for this review
This Rabbit packs a punch! First off, the silicone it's made with is incredibly high quality and smooth without any of that weird sticky or tacky texture that some other toys have. The rabbit is the first one that I've ever found to be positioned with enough power at the right level for my clit, and his little ears are easily repositioned into just the right spots. It is very powerful and may be overwhelming for beginners. I find some of the vibratory patterns to be very overwhelming to try and cycle through while in use, and I've had to remove the toy and try and dial it back a bit.

This toy would be great for solo play or with a partner. Plus the makers of this toy have gone so far as to include little bunny eyes on the rabbit for that extra cute factor. It is a little on the loud side with some of the vibration patterns, but overall I would say the loudness is equivalent to the strength of the motor. I love how sleek it looks with the black and silver/chrome details. Both the on/off button and vibration button are flat into the handle of the toy which makes it a little confusing for changing the rhythm while using alone, but if using with a partner, it would be easy to keep changing the vibratory pattern.

Will definitely be recommending this one to some friends!
This content is the opinion of the submitting contributor and is not endorsed by EdenFantasys.com

My Seducer tags
About author