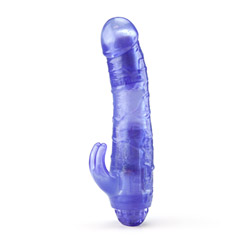 Want a party in a rabbit vibe? Well, you've found it in the Big Banger. You are sure to feel like you've been banged hard and nice with this bad boy! So go ahead, play intense and enjoy the ride.
Pros:
Super strong, tons of combinations, you won't get bored
Cons:
The clit vibe is a little weak on some settings, no handle, hard to grip
Rating by reviewer:
4
extremely useful review

The first thing I thought when I saw the Big Banger was "Oh my gosh! This thing is huge!" It's the size of a much larger than average penis. It's pretty heavy too, although not so heavy that it is uncomfortable. Then I was caught by the intricate detail. The bulging veins make it look realistic and eager to play. The toy has a new toy smell but very little taste. The texture is veined of course and quite firm, yet a tiny bit sticky. Thus, it needs lube.

So I lubed this bad boy up and decided to try him out. This is large enough that you will need to get warmed up a bit before insertion. I suggest 5-10 minutes of clit play. I inserted the shaft slowly, and it filled me up. It was so large that it was a little uncomfortable at first (I think I was too eager) but then it hit all the right spots. This toy grinds against the roof of the vagina and gently presses against that sweet spot near the cervix. The rabbit is pronged and hugs the clit from both sides.

For this toy, laying on your back is best as it provides you with intense stimulation that is not too intense. If you prefer a lot of weight, then the doggy position may be your best bet.

From the start, this toy provided mind blowing, earth shaking, stimulation. It was by far one of the most powerful toys I had tried.

The controls are on the back base of the toy. One button controls the shaft motor while the other controls the rabbit motor. The buttons are not raised and do not have any type of indication that they are there by touch. This can be difficult during play. I found that I had no idea which button I was pressing and sometimes I was not even pressing a button at all. This, of course, resulted in some unexpected combinations which was nice because I was not in complete control, the toy was.

To turn the unit on, simply hold one of the motor buttons down. Press either to switch through one of 10 patterns. Each motor has 10 patterns and runs independently from the other, which results in 100 combinations! Press any button for 3 seconds to turn the unit off. The next time you turn the unit on, it will resume where you left off unless you charged it. Charging it with the USB charger will return the unit to its original setting. Now, I found it a little difficult to get used to changing the settings. I would have to strop thrusting and bend forward to get into a good position to find the buttons. So, it was always a bit of an effort. That being said, it was worth the effort every time because the next combination was normally more mind-blowing than the last!

Now, this toy has no grip or handle. I found this to be a little cumbersome. I was literately grasping it around the rabbit! So, a lot of intense thrusting is not possible with this toy. However, the vibrations are so intense that it really does not matter all that much.

During play, I could feel every raised vein. This toy provides a ton of stimulation. Take your normal toy and multiply it by ten and you have this one! It's a party in a rabbit vibe! Although it is large, it really is not too large. It is large enough to provide girth queens with satisfaction but not so large as to be uncomfortable during play. Just remember to warm up before insertion!

The shaft vibrations are super strong, and the rabbit vibrations are pretty weak. Even so, I was able to get a clit orgasm, so they aren't too weak! All in all the toy is powerful, and vibrations carry well throughout the shaft, but not through the rabbit. This means that the more powerful patterns on the rabbit will probably be more useful than the weaker ones.

Each motor has the same 10 vibration settings.

The orgasm with this toy comes on a little slowly and builds leaving you at the edge of no return for a while. The release is also prolonged and strong. 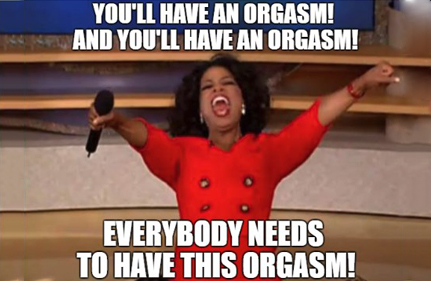