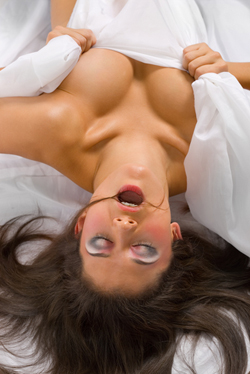 He was still a peachy-cheeked, lanky-limbed, soprano-voiced child who happened to be getting on the same elevator with us. Nothing about his appearance would have grabbed my attention except for the message on his shirt: ‘Sexual Expert, First Lesson Free.’
I was stupefied. We were on one of those family-friendly cruises. As in, there were hundreds of kids roaming around. Little kids and their grandparents and moms and dads. In between thinking ‘this is awkward for so many reasons,’ I wanted to know what this child’s parents were doing letting a pre-teen wear that statement.

My partner was more cogent. He broke the WTF silence to ask, “Really? You’re a sexual expert? Just what would a ‘First Lesson’ from a kid include?”

Without hesitation (*Insert snicker here*) the boy replied, “Yeah, I am. For you, it would be in theory only.”

What he lacked in experience he made up with bravado.

Maybe I’d missed the memo that said having your pre-pubescent child boast about his sex life was somehow funny, prudent or wise, whether or not granny was in the cruise cabin next door.

Call me what you want, but this I’m sure of: this young buck is another casualty of the sex wars against humanity.

Preteens aren’t the only ones dealing with the fallout of modern society on sex. These are treacherous times for vaginas. We’ve got politicians deciding what legitimate rapes are in between restricting women’s access to health care. Sexual freedom and criminalizing what consenting adults do is being eroded as same-sex couple’s fight for the right to have their unions legally recognized. Outside of politics, the media has a lot to answer for how we view sexuality. Even the Olympics, that harbinger of global athletic goodwill, caught us staring at close-ups of volleyball players’ derrières.

Is it no wonder we are having a hard time getting real when it comes to sex and pleasure?

I’m all for making noise in the right situation. Seeing the direction we are going seems like good reason to rally for sexual common sense and for more honesty in the bedroom.

Recently, I read an article about women faking orgasmic sounds. The author, Nicole Daedone, asserts that faking orgasmic pleasure is tantamount to lying to your love and “prioritizes thinking (I should be doing this, I wonder how he’s feeling, etc.) over feeling.”

She then goes on to explain the top five reasons women make counterfeit noises during sex including:

Women are noisier, but….

It ain’t without precedent. Women are generally thought to be noisier lovers. The best explanation that I’ve read comes from Sex at Dawn: The Prehistoric Origins of Human Sexuality (2010). In a nutshell, there are evolutionary reasons for our throaty exclamations. They are a way for females to announce they are fertile and willing. Circumstantial evidence for this explanation comes from our reaction to hearing others making love; many are aroused by the sounds of passion. Moaning is a natural part of sex, though how much and just what we groan varies considerably, lover to lover.

For better or worse, Internet porn is influencing our views on sex. “Anecdotal evidence and behavioral surveys and polls do indicate that cyberporn plays a role in men's relatively new-found disinterest in sex with their partners,” wrote Susan Crain Bakos. I see her point. One result is that we are screwing in a stew of misinformation about what authentic ecstasy looks, tastes, feels and sounds like. We don’t honestly think that cop shows accurately reflect police life, so why buy the imitation when it comes to copulation? Without the mystery, is it no wonder that many are going through the motions, pretending a delight they do not feel.

I believe that one anecdote is taking physical pleasure out of our heads and bringing it back into our bodies. Make noise and make it real. Somehow, someway we have to restore the moans of gratification without worrying about what we actually sound like.