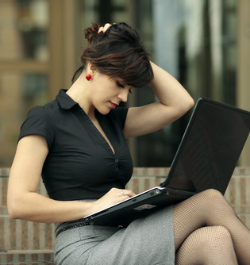 shutterstock, claudia veja
The signs are unmistakable. Women are owning sexuality in powerful and disquieting ways. Is the world ready for the future of femininity and feminism?
Years ago, I posted a playful, heart-in-cheek article about the emerging post-feminist femme fatales (PFF) on a staunchly feminist website. A PFF, I wrote, was both an “accomplished woman in all political, social, environmental and economic arenas,” and an “enchantress.” Confident and graceful, funny and committed to social justice, she wore lingerie, laughed at her whim, ate her cake and shared it, too, without counting calories or flaws.

She also preferred a world in which men exist as co-creators. “A PFF fancies men – strong and capable, fresh scented or smelly, willing to ask directions or not. You are our husbands and sons, fathers and friends, lovers and muses, and life is infinitely sweeter with you by our sides.”

Such a woman wanted to be appreciated for her mind, and ability to work hard and succeed in the corporate world. “There’s no need to prove superiority, only a desire to excel,” I suggested. “We don’t want to compete with men; we are empowered and strong in our way, which is quite fierce by any standard.”

The backlash was pronounced. People were outraged and the vitriol was fierce. A few readers saw the piece as satirical or funny; most did not. Underneath the mountain of first, second and third wave feminism was a dynamite-filled mine laced with booby-traps (forgive the pun). Modern day feminists are feisty advocates for what they believe in; even if the manner by which they offer their view points – beliefs I wholeheartedly share – disengage potential allies, break funny bones or silence meaningful discourse.

I took the comments to heart, and stored the seeds of the concept away. It wasn’t so much a wound licking moment as a realization that the pendulum has yet to settle. As the saying goes: We’ve come a long way (I’ll drop the patronizing, ‘baby’). We also have a long way to go, and many are rightly indignant that when it comes to women, sex and power, the scales have yet to be balanced.

What’s in Your Wallet?

“Sociologists and economists have long recognized three main types of capital: social, economic and cultural,” writes the noted NY Times best selling author and sexuality counselor, Ian Kerner. “Your capital depends on the assets and resources you can potentially use for gain, whether that means making more money or making more friends.”

At issue was whether or not a woman risks too much for publicly sharing sexy pictures of herself while cultivating the spotlight of a more conservative mainstream media. Posting her imaginary conversation between her Gremlin and her Inner Pilot Light, Rankin voiced what I thought was a bold and thoughtful decision, and was heartily smacked by many commentators who called her narcissistic and self absorbed.

I’ve come to explore and believe that a woman’s strength emanates from a primal, carnal place as much as it does from her brilliant mind and expansive heart. I’m no sociologist or hardened cultural critic with troves of research to substantiate what I have observed or learned intuitively. As a writer and an intimacy coach working with women to vitalize their libidos naturally, however, I’ve spent enough time poking around our secret erotic selves to learn that underneath our acculturated facades lurk fierce femme fatales yearning to live and love on full throttle, and not just because we want to snare a mate, secure that job or aspire to higher social standing.