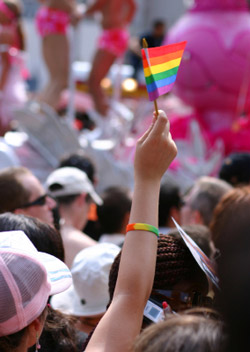 When we were all given the big talk about the birds and bees, we were told that boys and wee-wees and girls don’t. Well, it turns out that the old spiel isn’t quite true. What if you don’t have a wee-wee, but you’re pretty sure you should?

...in what seemed then to be a sensible universe, a little boy had a predictable conversation with his dad about their bodies.

“This is your wee wee,” Dad said, pointing, before continuing on to teach about how boys had wee wees and girls didn’t. And thus began that one boy’s conception of gender which remained untested until much later. At least, that’s how I imagine the talk went.

See, despite being a man, I was stuck in the other bathroom, learning about how my biologically female bits made me a girl. This article will begin to take apart that simple understanding of sex and gender and put it back together in a way that makes more sense. It will also provide resources if you want to learn more.

Gender:
Your feeling inside about whether you want to live and be treated (man, woman, other)

Assigned sex:
Your reproductive and sexual organs and the label (male, female) assigned to you based on them

Cisgender:
Someone for whom sex and gender line up in traditionally understood ways (female-woman, male-man)

Transgender:
Someone for whom sex and gender don’t line up in traditionally understood ways (female-man, male-woman)

So. What makes a man, anyhow?

Well, Dad had it a little wrong. Sometimes, you get a man without a wee-wee. It turns out that sex and gender don’t always line up in the easy way that most of us were taught to believe. For many folks, they do, but for some of us (the most recent estimates of prevalence put it around 1 in 500-2000 people), the match-up is somewhat flipped around.

In my case, I was born with female reproductive bits (I don’t really think of it as a vagina and ovaries, nor do many trans guys I know, but that’s the lingo with which you’re probably familiar) but have felt for a long time that I was a man. It’s tough to explain how I know so resolutely that I am a man except to push you to recognize how resolutely many non-transgender men (or cisgender men, in fancy lingo) wake up every morning and know, beyond a shadow of a doubt, that they are men.

Now, just to clarify, not all trans men play football and have trouble asking for directions. Just as there is diversity in how cisgender men express their masculinity (some obsess over cars while others love to cook), there is diversity of masculinity in trans men. There are butch trans men and femme trans men, gay, straight, bisexual and pansexual trans men. The only way all these men are alike is that, like cisgender men, all trans men wake up in the morning and feel like men - or male wolverines—we’re not all fluffy bunny types in the morning.

But are trans men born that way?

It used to be really popular to blame all sorts of things on early-childhood mothering. If mom was too distant, the kid turned out emotionally unstable. If mom was too domineering, the little boy turned out gay. To the relief of questionable mothers everywhere, those theories have since turned out to be pretty far off the mark. Likewise, various theories about how bad parenting creates trans men have failed to turn up any convincing evidence. The evidence, particularly that from young children who, from the day they know about gender, insist on a cross-gender identification, seems to favor far more innate origins to transgender identity, which manifest themselves in different ways and at different ages depending on a person’s environment.

Any number of factors can affect whether a trans man realizes and expresses his masculinity at age four or age forty. A trans man who is allowed to be a tomboy may feel less need to express the identity than one who isn’t. Or a trans man in an identical situation may feel more freedom to express that identity and thus may express it sooner. A trans man in a particularly accepting, open community may feel more comfortable expressing the identity earlier while those in more rejecting communities may wait until they are outside those communities to even admit the identity to themselves. Some trans men always know and others may not identify as trans until late in life for any number of reasons, none of which detract from their legitimacy as men when they do start to feel that way.

Um, so can you, like, treat this transgender thing?

Traditionally, in the medical-psychiatric community, transgender people have been viewed as suffering from a disorder—Gender Identity Disorder, to be exact. Although the arguments for and against this classification are too broad for this piece, folks who agree with the classification tend to emphasize the feelings of dysphoria towards their body experienced by trans people. In contrast, those who reject this classification argue that transgender people are expressing alternative, not disordered, gender expressions.

Regardless of whether a doctor or therapist characterizes transgender men as having a disorder, the identity itself is not viewed as an illness. Rather, a trans man’s gender identity is viewed as a part of him which is innate and must be respected. The goals of therapy or medical treatment are to help him live his life comfortably while expressing his masculinity. A therapist will guide a trans man through his “transition,” the time during which he moves from living as a woman to living as a man, and associated physical changes which he may or may not choose to pursue.

Transitioning? That sounds like something out of Star Trek. What’s the deal?

A trans man’s transition is made up of two parts: social transition and physical transition. Social transition includes all the big and little changes the trans man makes to his life as he comes out as a man, from buying a new wardrobe to telling his family and coworkers, to legally changing his name. This can be a time of both anxiety and relief for a trans man: while he is no doubt experiencing some discomfort as others get used to the new him, he may also be experiencing a comfort with his social role which he hadn’t felt before.

The physical transition is the hormonal and surgical changes which some trans men opt to undergo to make their body more similar to that of a cisgender man. Although every man makes his own decisions about what course of physical transition he will pursue, some are more common than others. The first step which many trans men will take towards physically transitioning is testosterone treatment. Testosterone, over time, will stop a man’s menstrual cycle, deepen his voice, increase his body hair and muscle mass, and redistribute his body fat to more male patterns. For instance, a trans man on testosterone may start to grow hair on his back and see his hip fat melt away and shift to more common male fat locations, such as his stomach. The best prediction of how a trans man will look after testosterone is to look at his biologically male relatives—his hair, fat and muscle distribution may look similar to theirs. Testosterone will also increase sex drive for many men and may affect their moods. Although many trans men do pursue testosterone therapy, many others don’t, for any number of personal reasons which do not detract from their legitimacy as men. A trans man may not feel dysphoric towards his voice or fat distribution, or may balk at the health risks of testosterone.

Another common physical transition choice for trans men, though less common due to its cost, is what trans men call top surgery. Top surgery involves a surgeon removing most of the fat in their chest (you might call their chest “breasts,” but some trans men are uncomfortable with this terminology) and reconstructing it into a cisgender male chest.

Other surgeries available to trans men include “bottom” surgeries, in which complex surgeries help to create testes or penises out of existing genital tissue and skin from other parts of the body. Bottom surgeries are less popular than top surgery because of their prohibitive costs and limited results (some constructed penises, for instance, cannot be used for penetrative sex, while other surgical techniques risk partial loss of erotic sensation). A final category of surgeries involve the removal of a trans man’s internal reproductive organs (the ovaries and uterus). Men may choose these surgeries to eliminate the possibility of their menstrual cycle starting if they ever stop taking testosterone. Men choose to undergo these surgeries or not for reasons relating to their own body images and related dysphoria, their financial situations and any number of other factors.

All right, so how do trans men end up here, at EdenFantasys?

Well, this was a nice primer and all, but where can I learn more?

Maybe your partner recently came out as trans. Maybe you’re considering transition yourself and want to learn more or meet others like you. There are a thousand and one websites out there with information about being trans. Hudson’s FTM resource guide has a great compilation of links to everything from definitions to hair grooming tips for trans men to trans health care information. Similarly, the resource page for Phi Tau Mu, a trans man fraternity, has lots of links, including a really great section of the website for allies. Finally, for trans men or their allies looking for community, the FTM (that’s female-to-male, meaning trans men) Livejournal community gets dozens of posts daily and has a huge bank of indexed posts on every topic.

Though there’s lots of great information and community on the internet sometimes the best thing is to get out there in the real world and meet people. Whether you identify as trans, are an ally or are just curious, conferences such as the Trans-Health conference or the Translating Identities conference will have sessions on issues of interest. Not only are they great sources of information from the presenting experts, but they are attended by interesting folks of every background imaginable who often have their own useful tips to share. For many trans individuals, these conferences can provide the role models and support that may not be readily available in one’s own community. For folks who don’t want to travel to far-away conferences or who want more regular support, many major cities have queer community centers which may be attended by other trans people and certainly will have helpful information.
Tags:
Views: 2075

Gabe
Who am I, in a paragraph? I’m a trans man with a flat chest and lots of testosterone in his veins but minimal butch attitude (though I'd hesitate to call myself femme per se). I’m a lover of women, men, genderqueers, people without gender, people with any anatomy under the sun, bottoms, tops, switches, people who have wild crazy sex and aren't afraid to talk about it, people with a whole lot of identity, nerds, and, of course, Barack Obama. I’m a recent college grad from a liberal liberal arts college. I’m a psychology geek, a Star Trek fan, a mac user, a Tantus and Funfactory silicone snob and a thai food lover.
I’m also a sex toy reviewer and a writer for this site. I’m constantly in awe of the insights others have in their reviews and am pushed by the comments I get on my own to think about the products in new ways. Please let me know if you need further clarification about anything after reading my reviews or writing, or if you have suggestions!

Other articles by Gabe