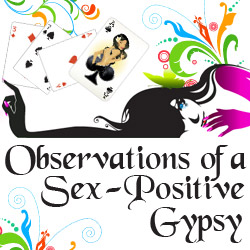 Summer inevitably yields to fall, and fall brings with it a cool jetstream of sex educators in constant travel. Maybe it’s autumn’s falling leaves bringing back eager memories of going off to school; maybe it’s just that we hate the heat—either way, it means that I’m about to embark on a near-two month stretch of four-day-a-week road trips, most of them by myself. Such is the luck of the long-distance sex educator.

One of the hazards of the job is the creeping case of the hornies that just can’t be quelled, pilled, potioned, pricked, or new-aged away. And since I talk, teach, and watch A LOT of sex, well...the hornies end up being my traveling companion. And when there isn’t always a lover around to tickle my fancy or drive me over the edge…well, a girl’s gotta take things into her own hands, right? Which inescapably leads to porn. There’s a problem, though—I think I qualify as “porn-jaded”, which makes it harder to find the stuff that gets my panties in a twist.

Another thing that gets me off is real women-on-women sex. Not the crap that’s called “lesbian” porn—porn made and marketed for male appetites—but real, messy, sexy, sensual sex between women. This is becoming easier to find—there are some great production companies out there that know the difference between women who will do other women if the money is right, and women who will do other women simply because they love it. And they’re filming it, and selling it, and more and more of us are watching and wanking to it.

The other thing I love is kink. Well, obviously, but let me tell you—the majority of the kink in mainstream videos isn’t kink; it’s fetish-light. Some hot chicks in latex and boots with a collar and a leash and a whip that’s so awful I wouldn’t use it to try to hit a fly—these things make up a lot of what’s out there, but not what’s real. I’m a big authenticity whore—let me see real tears, real joy, real arousal, and my body will respond. Thankfully there are some fantastic sources out there for great kink and semi-kink films—both online and on DVD.

It’s okay if you don’t like porn—hell, I don’t like a lot of it, myself. But at this point in my life, I do love to watch some amazing sex between gorgeously hot people—and not have to leave my hotel room to do so. And even better? I don’t have to clean up after them. Those money shots and juicy ejaculations can be awfully messy. Though, hotel rooms do come with cleaning staff, don’t they?
Tags:
Views: 1810
Related articles