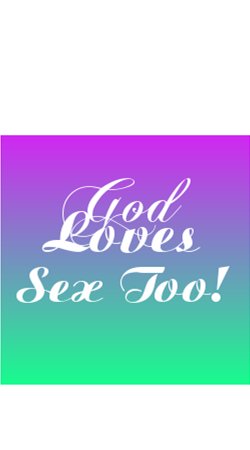 kendra30752
We've basically been told sex is wrong all our lives. A lot of us have grown up under the impression that God views all sex -- even between a married couple -- as dirty. Despite the need to re-inform, we shouldn't be spending our love-making time feeling guilt because in our hearts it feels like we're sinning. Guess what? God loves sex too! The idea that God is opposed to sex is false, and I'm here to tell you how I happen to come to this conclusion.

"Mistresses we keep for pleasure, concubines for daily attendance upon our persons and wives to bear us legitimate children and be our housekeepers."

— Quoted by Morton Hunt, The Natural History of Love, 1994

Digging deeper -- ideals that point to the conclusion that God does want us to enjoy sex.

Did you know that the clitoris is the only organ that serves no real purpose -- other than the one that makes your toes stiffen and curl and your heart race? Well, it's true unless you're the Spotted Hyena, in which case you give birth, have intercourse and urinate via your clitoris.

That's right ladies, God had our backs even way back when he created us! But some parts of society have this idea that God and godly people are opposed to sex, or that sex was only intended to benefit the male. To keep it clear, I'm discussing Christianity, and not exactly as a whole because not every person will believe the same way, but I have light to shed, nevertheless.

And believe me when I say, the clitoris was no mistake, my friend. How else do you explain 8,000 sensory nerve endings in one tiny piece of flesh? While God did intend for us to have sex in order to populate the world, he also created a sustained interest in sex as a means for men and women to express love – making love, which is beneficial for a couple and not just a way to populate the earth. While some may not have gotten there yet, many of us can attest to sex being a pleasure we’re happy to engage in, not something we dread like laundry. There’s no denying that humans get bountiful pleasure from it. Unfortunately, though, there’s a reason I feel it necessary to explain that God did mean for all of us to enjoy sex, and it’s not something he views as “dirty” as too many people have been led to believe.

Many people I know are under the impression of one or all of the below:

1. God is opposed to sex or views sex as dirty.

2. God intended for sex to only be a means of procreation, nothing else. Not pleasure, not to express your love for your spouse. Baby-bearin' sex only!

3. God intended for sex to be pleasurable, but only for the male. The female's job is to give said pleasure, but not reap any of the benefits herself.

So which is correct? I'm going to surprise you: none of the above. Not in my learning or beliefs anyway.

In older days, it has been said that the intimate spots we hold dear today – such as the G-spot – weren’t even heard of. In fact, some autopsies were said to show no signs of many females having a G-spot. And at one point, some doctors believed that the G-spot some women claimed to have was actually a deformity! And then there were beliefs that women had no place to enjoy sex at all. Learning how sex was throughout time is interesting and leads one to wonder if women actually did discover these sweet spots but held onto their secrets, perhaps in fear of what others would think, or like many things today, it simply wasn’t talked about. So if a woman did discover such a magical treat, she felt she should keep it to herself or that she was alone in her...gift.

The clitoris, however, has been a known pod of pleasure for as far back as you can read. Some believed that in order to conceive, both the female and the male had to reach orgasm – the female’s orgasm came clitorally – and that when both parties did reach orgasm, the sperm would indefinitely be carried further. While this is a myth, it shows that the pleasure stemmed from clitoral stimulation was no secret.

Again, there were still those who believed the woman had no place to enjoy her part of love-making, or anything else for that matter. For example: Demosthenes, the Greek orator of the fourth century B.C., had a particular opinion as far as sex for the female; it went a little something like this: "Mistresses we keep for pleasure, concubines for daily attendance upon our persons and wives to bear us legitimate children and be our housekeepers." (Quoted by Morton Hunt, The Natural History of Love, 1994)

My conclusions on is God opposed to sex?

When you think about it, you may find that your guilt over sex with your spouse was wasted. I think those who have felt guilt over indulging in their love-making may find relief in this.

Why would God not want his people to enjoy sex? Why would he mean for sex to be only a job for a woman? Because he created women to be beneath or less than the male? In fact, he didn’t create either to be over one another, as many of us are led to believe. God created us equally and sees us as equals. Neither female nor male is held higher above the other in God’s eyes. That's right. It's time to stop believing that a woman is nothing more than a hole to dispose of seed and bear offspring. Not that any of you believe this way, but believe it or not, so many people do! They simply do not know differently.

Another thing that leads me to believe that God never viewed sex as wrongful: The book of Solomon is somewhat sexually explicit – so much so that years ago, it wasn’t to be read until one turned thirty years of age (in some religions, seventeen) or was married, but you mean to tell me God thinks sex is dirty?

Some of the verses in Solomon clearly show that sex has always been something intimate and immensely pleasurable for a couple as well as a necessity, in the way that sex bonds you and your spouse. One particular verse can even be depicted as speaking of the act of oral sex, and in a good way! It’s actually described as something “precious” and “beautiful.” In particular verses, a couple’s erotically detailed desires hold so much passion and love in their words – something that’s rare these days.

In the bible, God has given concise commands for a couple to be intimate with each other, and often. Yet studies show that some still feel guilt over love-making with their spouse! A survey in 1994 by Edward O. Laumann revealed that 2.8 percent of married people feel guilty after having sex! Of course that was some time ago since we’re living in 2012 now, but it still shows that married people feel guilty for participating in something that God gifted us, something that should be pleasurable.

The number of people who are married and ashamed to have sex is baffling. Knowing there are people who feel a pang of guilt after having a nice, heart racing session in bed with their own spouse makes me sad. I’d hate to have a cloud of doom hang over our love-making bed after enjoying ourselves in something that’s actually healthy!

It’s also sad that this isn’t discussed more and that there are still people who’ve been married but unable to fully enjoy themselves sexually because they’ve been under the impression that God wouldn’t approve. Although your pastor may give you mini assignments to put a smile on a stranger’s face Sunday night, it’s not likely that your pastor has ever ended his/her sermon assigning the adults to put a smile on their own spouse’s face – with a good, breath taking round of sex.

You don’t need your pastor to tell you. Thankfully, God loves sex too! All you need is to learn what God truly feels about sex, and if it helps, read those scriptures yourself. Read them with your spouse, (because believe me, Solomon can certainly wake up those senses!) and then have yourselves that healthy round of wild sex you’ve always wanted but were afraid to allow yourselves the luxury. Only this time, do it knowing that it is your blessing from God, and not something you have to feel guilt over afterward!
Tags:
Views: 2313
Related articles