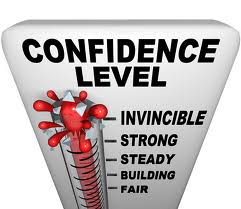 www.promobiledj.com
I think most of us have, at some point in time, lacked confidence. We've read plenty of tips to increase our confidence, but the lack didn't subside. The typical confidence tips are: get a haircut, do something wild, have your makeup done professionally, and look in the mirror and repeat "I am beautiful." Those "tips" never quite cut it for me, so I thought I'd share some things that have.

"Having self-confidence also has a lot to do with your personal style - how well you embrace and define it."

From Mrs. Fix It to Mrs. Sex Kitten

Empowerment Do something that empowers you, even if it’s just painting a room by yourself. Small steps, and often having a sense of independence can build confidence. Many times it’s not all about my looks or compliments that boost my confidence. It’s also important that I recognize my ability to do certain tasks on my own, without the help of someone else. It's even better if it’s a task I didn’t expect to be able to handle. It is empowering to know that I can fix a computer problem or paint an entire room by myself, including moving all the heavy furniture. Those aren’t big things, but they are some things that have played parts in my confidence levels. Being productive, doing something I may not have known I was capable of all... that brings me a sense of empowerment and confidence, which in my opinion, go hand in hand.

Feeling Sexy -- for You Buy a piece of lingerie only for you. By this, I mean sometimes we tend to wear what others like, so taking a moment to totally forget about pleasing someone else and considering what you might wear if you were only doing it for your own feel-goods, what would you choose? For me, buying lingerie (and wearing it) is sometimes the biggest confidence booster of all. Most of all, though, choosing something that I feel like a princess in is what’s important. This is what makes me feel most confident, whereas if I were to choose say a cupless, crotchless, faux leather teddy only because someone else would like that look would not necessarily make me feel confident, but more out of my comfort zone. Don’t get me wrong, getting out of your comfort zone is something we can all benefit from, but when it comes to building confidence, one should aim to step into what they feel sexy in, not what they feel least comfortable in. Maybe feeling like a princess isn’t your style. Say you’re more the faux leather, crotchless kind of gal but you’ve been wearing frilly, feminine lingerie because you think it’s what someone else likes... Try going with a piece you like, even if your spouse isn’t giving it 5 stars. You’ll feel confident, and when we feel confident, we often feel like sex.


Knowing what diminishes your confidence. Identify what types of things take you from feeling like a confident woman on top of the world to the girl wearing shades and a floppy hat to hide what you feel are flaws. Maybe messy hair makes you feel this way. Hey, we can’t help what makes us feel less than our best, so there’s nothing wrong with identifying those things.

The next step would be to either try to stop letting said thing affect your confidence, or take the easier route – a heavy-duty flat iron, or whatever makes you happiest with your hair.

While it can be very confident-boosting to step a little outside your regular comfort zone, it’s just as important to not overstep too much. For example, if you’re planning a night out at someplace casual and you’re used to wearing jeans and a t-shirt, but chose to wear a fluffy dress, you might end up feeling that you’ve overstepped your confident zone, which would have the opposite effect of what you’re going for. When you’re stepping out of that comfort zone, it’s best to step just a few inches outside your box, not a few yards. Over time, you can take more steps, but you can’t just go to the extremes without the feeling of over doing, over stepping, and just feeling out of place. So, instead of the big, pink fluffy dress... a casual skirt and top that make you feel sexy would probably be more appropriate.

For the days when you just can’t seem to get your confidence on, try spending a few minutes with you, your favorite items from your wardrobe and your mirror. I’ll admit, I still feel a surge of confidence later in the day after I’ve spent a little while prancing around in something that made me feel sexy. Whether it’s a pair of booty shorts and a top, or a corset, I’ve spent a few minutes at home walking around, doing a few chores in whatever I feel sexiest in that day before actually starting my day just for an extra surge of confidence later when I’m out of the house and wearing a pair simple clothing. It’s amazing how small things can affect your confidence, even later in the day.

Take sex, for example. There have been countless times when my partner and I started our afternoon with sex that left me feeling happy, relaxed, and often times more energetic afterwards.

It has been said that intercourse releases Oxytocin, commonly referred to as “the feel-good chemical.” So, for other women like me who often feel a new found happiness, clearer head, energetic, and an overall sense of well-being after intercourse, it could benefit you to have your egg McMuffin with a side of your man before starting a big day. For me, this would be in the afternoon, since I’m on an all-nighter schedule.

On days when my partner and I have had intercourse before I had to work, or even just before we had a fun outing, I’ve found that my happiness levelsm as well as confidence levels, are drastically increased and often last throughout the day, not only immediately afterwards.

For men, though, the feeling could be the opposite of energetic. A sense of well-being is common for men, as is happiness, but not so much energy. Many men are exhausted after intercourse. In fact, some believe that the woman takes the man’s energy during intercourse. I’ve also heard that she can “give it back” to him, but my partner and I have yet to figure out how that part works. He’s always tired after sex, and we often joke that I “stole” his energy.

Besides the feel-good chemical adding to your confidence for the rest of the day, intercourse is a bonding experience, one where we express love for each other and often times -- that alone is a confidence-booster. Sex before a big day could be just what you need to feel a bit more confident, especially if your partner is one that’s vocal about their feelings toward you, and your sexy body.

Eating! Researchers at McGill University found that certain foods, such as nuts, have an amino acid called Tryptophan that actually give people more confidence. The study showed that participants who were given three grams of Tryptophan had increased levels of confidence. So... chomp away. Peanuts, hazelnuts, and soybean nuts are high in Tryptophans, as are leafy greens like spinach. Fish is also high in Tryptophans.

We all know that chocolate is said to raise serotonin levels in the brain, causing us to feel happy. Feeling happy is necessary in order to feel confident. However, if you've been chowing down on Snickers bars all day and still feel lousy, there's a reason. It's cacao or "coco" (not the sugar-filled stuff) that actually releases serotonin, so you'll need the raw deal to get your happy on.

Not only can the consumption of three grams (or more) of Tryptophans a day cause a boost in confidence, but a study also showed the participants to be less “quarrelsome,” so this is certainly another benefit for your relationship. Eat the annoyances away!

And lastly: Be loud and proud! That’s right. Voice it. Make a point, even if subtly, to audibly share something that you like about yourself in front of your partner! I’m telling you, they’ll enjoy hearing you say something nice about yourself, especially if you’re someone who tends to down yourself in front of your partner. Whenever I voice something good about myself, my partner loves it. For instance, about a week ago, when discussing a particular issue I’d run into, he said, “that’s what happens when you’re pretty. It wouldn’t have happened if ‘they’ didn’t ever see how pretty you are.” I quickly spouted off, “well, I ain’t about to hide away just cause I’m pretty!” He acted like he was stunned. He said, “what did you just say? Repeat it!” He hounded me until I repeated it. He said it’s so rare to hear me say kind things about myself, and that he loved it when I did.

It’s true, though. Most spouses find confidence to be a turn on, and when you can voice something good about yourself (without being arrogant or conceited, of course), they like that. It’s even been said that when a woman says something such as throwing the word “sexy” in with the words “my legs,” then the person she’s saying this to automatically sees those legs as sexy.

It All Comes Down To Feeling Good

It’s no secret that we feel better when we feel sexy. We want to look good. Big deal, right? We all do. When we look good, we are more likely to smile and have a happier day. That’s just how it works. No sense in feeling shame over it. To put it simply, do what makes you feel good -- whatever it is. Wearing blush? Adding mascara to enhance your pretty lashes? A skirt, dress, or pair of awesome jeans? A certain hair style? Heels? All of the above?

It doesn’t matter what makes you feel the best about yourself, but whatever it is, do it. If it’s going to make you feel more confident, don’t worry about what somebody else may think of you. I can’t explain why some days a pair of heels makes me feel sexier, but when that mood strikes, on my feet they go!
Tags:
Views: 1662