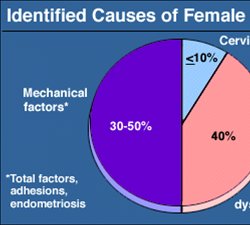 Lakecharlesobgyn.com
Since writing about my miscarriage, some of you have asked if I knew how to increase the chances of fertility. Soon after that, I began writing a few of the things that I had stored in my mind. Now, I've finally found the time to sit down and share those thoughts.

"Hope is the little voice you hear whisper "maybe" when it seems the entire world is shouting "no!""

Some of you read the article where I shared, for the first time, my entire in-depth story about my miscarriages and the possible reasons for them, as well as how I coped. For a long time, I spoke with my gynecologist about ways to increase my chances of actually carrying a pregnancy to full-term, but the devastation, coupled with an illness, made me put it off. I spent time listening to my gynecologist, nutritionist, grandmother, and doing research of my own for years in order to learn what I could do to increase my chances when I did want to go at it again.

You all know the basics of conception, and that it's important to take prenatal vitamins and get plenty of folic acid, so I won't waste your time giving you the information that you've likely known since middle school. Instead, I want to share some of the information about increasing fertility that I've learned. I don't think that this information is very widely known, but if I am wrong and my article doesn't offer you something, do tell.

Despite my previous words, I'm still going to start with folic acid. It helps ward off birth defects, according to a study done by the University of California’s Berkley.

Zinc
Studies done in two outpatient fertility clinics and nine midwifery practices in the Netherlands have shown an increase in total normal sperm count after the participants were given zinc. Zinc is said to have a major effect on fertility levels because zinc not only increases testosterone and semen production, but it also affects ovulation. Zinc increases fertility in women!

Zinc is important for the reproductive systems upkeep. If you include plenty of zinc in a diet, you can drastically increase your chances of that next midnight romp being your path to pregnancy. In fact, getting at least fifteen milligrams a day (for both parties) is important for increasing your baby-havin' chances. Zinc also plays an important role in fetal development. You should be careful not to overdo it, though, because taking too much of your needed vitamins and minerals can have a reverse effect, so be sure you only get the recommended dose.

According to the The Centers for Disease Control’s Assisted Reproductive Technology Report, zinc deficiencies have been directly linked to early miscarriages.

Caffeine!
Two studies suggest that when men drink coffee before intercourse, it has a sort of hulk effect on their sperm. Those innocent little tad-poles basically become muscular frogs hip-hopping their way straight into your uterus. I'm exaggerating, but caffeine doesn't only energize you, it energizes your sperm too! Antioxidants help protect sperm and eggs from free-radical damage, and coffee contains antioxidants. Fruits, herbs and superfoods )such as acai, blueberries, oregano, etc) also contain antioxidants.

Coincidentally enough, this is not the case for women. Caffeine has more of the opposite effect for women, according to Yale University School of Medicine. It's claimed that consuming caffeine, especially more than 3 cups a day, can cause reduced fertility. Another source (NaturalFertilityInfo.com) claims that too much caffeine can promote a miscarriage, rather than help with fertility.

Iron
Some nutritionists believe that iron intake plays a significant role in fertility levels. Whether it's a necessity or not, iron is always an important mineral to have, so don't skip the beans! Minerals, as well as vitamins, also help protect the eggs and sperm from free-radical damage. Iron is an important mineral for not only good health, but conception too.

Omegas
Omega 3 and 6 are also important for both the male and female. This is because, according to Elise Schlosberg, a clinical nutritionist, omega 6 and omega 3 help cells to function well by regulating cell membrane fluidity. Fish is your main way of obtaining these omega's, which are important for your health whether you're trying to conceive or not. However, if Flounder (or is Nemo the new Flounder?) is your buddy and not your idea of dinner, then you have the option of eating flax seeds, hemp seeds, and Chia seeds, which are what I eat to get my omegas. There are also omega supplements to choose from.

There are other things that help.
• Vitamin D helps with hormonal and ovulation balance.

• Vitamin E has been shown to help sperm health. Interestingly enough, Vitamin E also goes by the name of "Tocopherol," which means "to bear young." Vitamin E also helps to protect the sperm and eggs DNA integrity, since it's an antioxidant.

• Studies have shown that CoQ10 is helpful in increasing sperm motility in semen. CoQ10 is yet another antioxidant, which we all know by now helps protect the egg and sperm from free-radical damage.

• Vitamin C increases fertility and improves hormone levels in women, as well improving sperm quality in men. Vitamin C also protects sperm from DNA damage, which in turn reduces the risks of miscarriage. It's been thought that Vitamin C increases the amount of water in cervical mucus, which is something that increase the chances of conception. Do take note, however, that Vitamin C has actually been said to cause miscarriage in large doses; people have actually used this method to terminate pregnancies. Because of this, one should be very careful with the dosage!

• Lipoic Acid is another antioxidant that is found in foods such as spinach, potatoes, and red meats. Lipoic Acid protects the female reproductive organs and has been shown to improve the quality and motility of sperm.

• Alkaline water! Yep. Even your body's pH balance can play a role in your fertility ability -- or lack thereof. There are many foods and ways to bring the body to a more alkaline state. Personally, I chose to go with an alkaline water, since that is what is easiest to fit into my lifestyle. My nutritionist first recommended foods like wheatgrass for alkalizing, and I do use those as well. However, something I can make sure to do daily is drink water, so that's easier for me.If I don't add lemon juice to my water -- lemon juice makes it alkalized -- I keep bottles from a reputable alkaline water company on hand, which actually tastes amazingly different from my tap water. This has brought me other health benefits as well.

For reference, anything below a 7.0 pH is considered acidic, not alkaline, which is the opposite of acidic. A pH of 7.0 or higher is necessary in order to be alkaline.

Alkaline water works similar to antioxidants in that it counteracts free-radicals, which I've talked a lot about in this article. This is why alkaline water was a suggestion for my diet -- as I am someone who is so prone to miscarriages -- to aid in the fertility process. Basically, I see my alkaline water consumption as a minor boost that, in combination with all these other habits, can further increase my fertility chances. In the meantime, while I'm not even trying to conceive yet, alkaline water, as well as these other habits, is still beneficial to my health and will ensure that I am healthy enough when I do get ready. Alkaline foods (such as leafy greens) are beneficial as well.

If you choose to add lemon juice to your water to render it alkaline, you will also be benefiting from the "detox" effects of the lemon. It's very beneficial for your organs (like the kidneys), since lemon juice will flush out toxins and build up.

Herbs That May Increase Fertility

Nettles
For my fellow herb lovers who like to get a kind of all-in-one deal, nettles are a great way to get your calcium, iron, and folic acid in. Even better, nettles are said to be nourishing to the reproductive system, and they can even aid in implantation and cell division. They can also possibly help prevent birth defects.

Damiana
Damiana is another herb that's widely found in aphrodisiac/energy supplements, such as Shunga's Energy Supplement, which is a drink designed for increasing arousal and energy. My partner loves the male Shunga Energy Supplement, and I have had the female version. Damiana increases both the male and female's chances of fertility. It is also considered a nourishing herb for the reproductive system.

There are plenty of other herbs that have a reputation for aiding in fertility, but to keep things short, we'll stop at these.
Tags:
Views: 1651