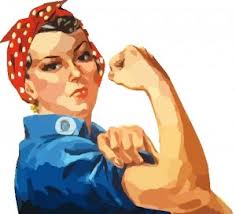 www.Scoopit.com
In this article, I want to briefly discuss this particular idea that feminists don't deserve, or should not receive, chivalry from a male spouse or boyfriend. Many people have this idea, which basically originates from a few misconceptions about feminism and chivalry.

"Women have been trained to speak softly and carry a lipstick. Those days are over."

You Can't Have It All?

If you’ve hung around Eden for a while (or anywhere else online for that matter), you’ve probably read a lot of discussion on feminism. You may even take part in these discussion.

Recently, a poll on the EdenFantasys forum asked, “Are you a feminist?” While not everyone involved on Eden answered the poll, thirty-two out of sixty-six voters voted, “yes.” Twenty-three said, “no," and one other said, “I don’t know enough about feminism to decide." Lastly, eighteen said, “it’s more complicated than that.” Most who voted the last option proceeded to explain why in the comments. So, it is safe to say that most community members are at least somewhat familiar with feminists.

SexIs readers are probably familiar with the various images circulating the internet, especially on social sites, of a person (usually a woman) holding a sign that says “I need feminism because…” Clearly, feminism is a huge topic. Some of us are all for it, some of us despise it, and there are some of us who are just in between or neutral. There is a lot that can be discussed about feminism, but there’s one thing in particular that I would love to share.

First, let me tell you how this topic originated. Many people who are involved in “feministing”—and even those who are opposed to it, but love to debate and discuss it on sites that promote feminism—have heard this particular type of statement or something close to it: “if you’re a feminist, you have no right to ask for chivalry. Feminists want it all—they want to be treated like men and still be treated with chivalry by men!”

I read and hear this almost daily. Feminists want it all? A feminist wants to be treated like a man?

The truth is, men often do get paid more than women doing the exact same jobs, putting in the exact same hours, and producing the exact same results. I'm sure that we're all aware of this. Maybe equal pay isn't a big concern for you, but respect? It is one thing to not be valued as much as someone else simply and only because of what's in our pants, but to not even be respected? To be thought of as "less than" because you're female?

The statement goes on to say that, as feminists who want to be treated like men, we do not have the right to want, expect, or receive chivalry. It also states that we cannot expect for our spouses or boyfriends to be gentlemen towards us. This is another misunderstanding.

Feminist or not, being treated with chivalry is an act of love and kindness that some men like to show to their spouses or girlfriends. This type of gentlemanly behavior includes acts such as picking up the check, holding the umbrella, opening the door for your partner. If I’m not mistaken, I have also seen males open the door for other males, and the same for females. For that matter, some men do these things for people unrelated to them because they choose to act this way. They want to show acts of kindness towards others—in this case, they want to show it towards their spouse/partner. For some people, like my own male partner, this comes naturally. In some eyes, it’s simply kindness and something that some men want to do. It's not something that they feel they are forced to do (although some do feel that way.) So, my argument here is that, just because you are a feminist (which remember, that means you want equal treatment and respect, not for people to view you as a man) does not mean that you have no rights to any kind of chivalry. Some men, my own partner for example, feel that this is simply having manners, and being a polite and caring person. It’s something he chooses to do; he is not forced to do it, and it comes naturally to him. He would have to make an effort to stop being a gentleman and begin treating me like I am another male. That would be tough, because he can clearly see that I am not another male.

The biggest misunderstanding, where this argument is concerned, is that some people misunderstand equality as being viewed as another man. Just because I believe in equality, and could be considered a feminist does not mean that I want to become a man. It does not mean that I want to urinate in a urinal, stand up to pee, and change who I am to act as a man.

Anyway, so what if I did?

Having feminist views means one thing, though—that I want women to have the same rights that men do, and I want women to be respected equally. It's not a favor to give us equality; it's called treating us as humans.

Many people take this whole thing and turn it into way more than it is, and this happens on both sides—feminists and non-feminists, males and females.

In order to receive kind treatment from a willing spouse, you shouldn't have to act like a lady, cross your legs when you sit, never say a curse word, and be all smiles and sunshine every second of every day. You can simply be you, whether that means being a little loud every once in a while, wearing a pair of boxer shorts to bed, or heck, wearing jeans sometimes! You don't have to be only one thing—masculine or feminine. In fact, every single one of us is made with a bit of both. It varies, but they're both in us all. Since when did anybody have to choose to only be masculine or feminine, anyway? And yet, feminists are told that we have to choose one or the other!

So what if you "want it all"? What's wrong with wanting to have your cake and eat it too, so long as nobody's being forced or hurt in the process? If your male partner wants to be a chivalrous guy, why deny acts of kindness simply because some people believe that it isn't deserved? Guess what? It is! If you want to be a feminist and enjoy kind acts from your spouse, eat it up, girlfriend!

So, keep enjoying those thoughtful acts that your spouse shows you out of the kindness of his heart. Let him open a door for you to show you that you being in first is important to him. It does not mean that he’s in control of you, as some people tend to believe. It does not mean you are not a feminist if you allow him to open a door for you without feeling guilty. No, it simply means that you know how to receive a kind act from someone who is thoughtful. And yes, you can be a feminist and choose to be a stay-at-home-mom. Feminism is about equality and choices. It's as simple as that.
Tags:
Views: 1655