Not Gay, Not Straight 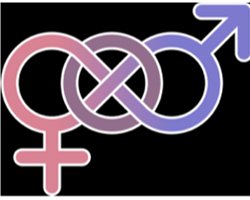 http://www.scaddistrict.com/blog/2012/06/12/saying-goodbye-to-a-bisexual-stigma/
As a queer person who is not strictly lesbian, it can be difficult to fit into a gay community, and impossible to fit into a straight one.

"“No I’m not gay, No I’m not straight, And I’m sure as hell not bisexual, damnit. I am whoever I am when I am it, Loving whoever you are when the stars shine And whoever you’ll be when the sun rises.”"

I am a queer ciswoman. I have always felt pressure to be either gay or straight, and in adolescence, it was really stressful trying to determine what I was. In fact when I came out, I came out as gay, despite my occasional attraction to men, and I still primarily, for simplicity, identify as such. I am more gay than not: most of my physical attractions are to women. It was easier to just say gay and avoid confusing my parents and friends. But then, I met a cisman who I really liked.

After meeting this man, I realized if I was going to date him, I had to explain everything to everyone all over again. I had to re-explain to my parents and siblings what my sexuality was, much to their confusion. They've been pretty good about it, but it seems like they think my queerness is just some figment of my imagination and I really just like men.

Within queer communities, I've constantly been pressured to identify as gay. When I first met most of my friends, I was in a relationship with a man and didn't bother saying that I was anything but straight. We had been together for a while, what did it matter what I was? I had a boyfriend with whom I was very serious. When I did say I was queer, there was so much pressure to say “gay,” so I did. People told me they “always knew” and I was always gay. Sure, I knew I looked at women. But I wasn't totally sure I was completely gay, and I feel like I have a better grasp on my own sexuality than anyone else does.

Sometimes, it makes me really uncomfortable to be around other lesbians. Even though we have the same culture and can talk about women, they won’t accept me the same way if I date a man. I've honestly gotten more support about my queerness from straight people than from gay people. Of course, people who are most understanding of my situation are people who identify as somewhere in between.

Often times, I've found that people who claim to be the most supportive of the “sexuality is fluid” idea are the worst at actually supporting fluid people. When I started dating a man again, people said to me, “So what, you’re straight now?” or “I thought you were gay” or even the incredibly rude “you’re not a lesbian then.” People seemed to think anything I did before that was a phase, and that I got over it and went back to men - like in high school.

Bisexuals and other queers who aren't strictly homosexual and who are in monogamous relationships cannot flaunt our queerness 24/7. If we say we are queer, whether our relationship is heterosexual or not, we are queer. And even if we identify as gay but then date someone of the opposite sex, we’re still allowed to identify as such. It’s difficult enough when other gay people turn their nose up at me because my current relationship is “heterosexual” (though it’s queer in a lot of ways) and I can’t relate to straight people at all. It’s even harder when people try to strip me of my queer identity or name my sexuality for me. My queerness is just as real as anyone else’s.
Tags:
Views: 2035
Related articles