My name is Kat, and I’m bisexual. 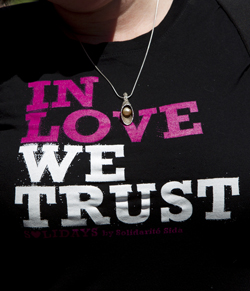 I don’t know what changed, but in 2005, I decided that even if I couldn’t come out to my family, I had to come out to someone. I had to try it out. I had to say the words, at least.
Not a very unique situation, I’m sure. There are lots of us, after all. But the thing is, I was twenty-one years old before I came to the concrete realization that, hey, I wasn’t exactly straight. And it took me a hell of a lot longer before I was actually comfortable with the whole idea. Most queer people talk about the struggles they faced being accepted by others, how difficult it was to come out to their friends and family. For me, though, the biggest obstacle was accepting myself.

When I began to question my sexuality, I was in university. Of course, that time of life is a period of exploration for everyone – you know, the whole “finding yourself” thing – and for a long time I tried to convince myself that I wasn’t really bisexual. I couldn’t be! How could I be? I’d never had a relationship with a woman; how could I be anything but straight? All the while, I was totally ignoring the fact that, for as long as I could remember, I’d found womens’ bodies just as fascinating, just as arousing, as mens’ bodies. I completely discounted the fact that I had always checked out girls, just as I had checked out guys. I was in complete and total denial.

I had a good reason for trying to deny who I was. I grew up in a very small town where “queers” were, if not outright harassed, at least talked about behind peoples’ hands. People who were seen as being “that way” were given somewhat of a wide berth, as though they just might rub off on the “normal” people. Not only was that small-town attitude poisonous to someone like me, but I was also raised Catholic, and I think that speaks for itself, doesn’t it?

I cannot even begin to describe the inner turmoil I went through while I tried to reconcile who I now was with who I had always been. How could I be bisexual and still be Catholic? Was I now doomed to eternal damnation simply because I was “one of those”?

I didn’t know what to do. Even after I had experienced my first relationship with a woman, and knew for certain that this was no phase, I constantly questioned whether I was really “that way.” I couldn’t really bring myself to actually use the word, even.

And to make matters worse, not a soul in the world knew. How could I tell anyone? Even though I knew my friends were open-minded and non-judgmental, the attitudes I’d always seen towards LGBTQ people made me fearful that I was wrong – and that if I revealed who I really was, everyone I loved would turn against me.

Unfortunately, coming out to my friends wasn’t the biggest problem. My family is not exactly one in which coming out of the closet is a joyous occasion. And if I ever thought that coming out to my family would be something I could do, something that happened during one of my spring breaks cleared up any misconceptions I might have had in one hell of a hurry.

I was getting ready to go out one Friday night to a club with a friend, and she jokingly said something about how we were going out to “get ourselves some men.” I said something like, “Well, hey, if it happens it happens, but if it doesn’t, who gives a shit?”

My mother, who was standing within earshot, snorted and shot back, “What are you, queer or something?”

I love my mother, and I know she loves me. But that incident happened ten years ago, and I still remember it like it happened ten minutes ago. I don’t think I will ever forget it. A knife in my heart wouldn’t have hurt as much, because at that moment, I knew she could never know me for who I really was.

So is it really any wonder that I couldn’t accept who I was? I know that in comparison to what other queer people experience, I’m actually lucky. After all, at least I have some semblance of passing privilege, especially if I happen to be in a relationship with a man. I don’t, after all, wear a sign around my neck announcing my sexual orientation. But it was still difficult.

I would see some of my gay friends proudly wearing rainbow jewelery and being completely open about who they were, and I don’t mind admitting that I was jealous. Even though I still was hesitant about admitting, even to myself, that I really was queer, it still hurt that I didn’t feel like I had that choice.

I don’t know what changed, but in 2005, I decided that even if I couldn’t come out to my family, I had to come out to someone. I had to try it out. I had to say the words, at least.

The person I chose was a former roommate I was pretty close to. I took her to be a pretty open-minded person and was fairly confident she would have an okay reaction. I’ll admit, though, that my heart was still pounding like mad when I finally worked up the nerve to blurt it out.

I barely had the words out when she said, “Well, holy shit. Why didn’t you tell me sooner? I have some really awesome girlfriends I could have hooked you up with!”

It was, quite possibly, the best possible reaction I could have received, and I am so glad that she’s the first one I told. Our friendship has not changed in the slightest because of my revelation; if anything, I now know I can pretty much tell her anything.

Since then, I’ve come out to a handful of other friends, a small number of people I know I can trust. Strangely enough, the one I’m most hesitant about coming out to is my very best friend in the world. I don’t know why. I’ve come close a few times, but I always stop short of actually saying it. I’m sure sometime I’ll work up the nerve – and I’m sure that when I do, all my trepidation will have been for nothing.

In the past ten years, I’ve struggled so much with who I am. I’ve tried to deny it. And I’ve fought with the idea that because I haven’t come out of the closet all the way, I can’t really be queer. But I have finally come to the realization that it doesn’t matter if anyone else knows.

It doesn’t matter if no one else accepts me.

Yes, that’s right. We want YOU to write something for SexIs! See this post for details!
Tags:
Views: 1832
Related articles

Other articles by Kat Shanahan