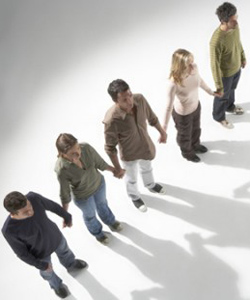 Whether it’s coming from the mainstream or the gay community itself, that aphorism: “bisexuality is just a layover on the way to gay-town” has been slow to disappear. As more bi men come out — and more straight men experiment with kissing their friends, is male bi-phobia finally on the way out?
A new study posits that bisexual men do actually exist (so, yeah bi guys just forget about that 2005 Northwestern study which prompted the Times to make the headline: Gay Straight or Lying?)

Five years after that initial study was released, the Midwest’s first “all bisexual swingers club” popped up. The party was mainly for bisexual men — all of whom are on the DL. Hosts of the party, Tim and Karen, are a couple in their late 40’s to early 50’s with youthful energy. When the two of them began looking into the “swinger/lifestyle scene” they realized Tim’s bisexuality wasn’t going to be accepted. “We put up an online profile, but when we put bi-curious on my side, our profile hits dropped to zero,” says Tim with a Midwestern accent.

Getting some experience gave Tim savvy — there were bi guys in the lifestyle, but there was a code. "Now I know what words to look for on the profile: 'open-minded,' 'up for anything,' alternative interests’ — those are generally the tip off” he says.

At Tim and Karen’s all-bisexual party, there are glory holes, curtained-off orgy rooms, and upon my arrival, a bang-gang on top of a spiral staircase. Groups of middle-aged men and women mingle in the nude, before disappearing into dark rooms together. It makes the bi-phobia all the more confusing — with all the open sexual exploration, how is this community scared of bi men? “The lifestyle is pretty homophobic,” says Kevin, a lean, tan party-goer. Kevin also says he can’t put “bisexual” on his online profile but notes that — “at the same time, if we did not put that Teri (his petite, blonde wife) is bi, no one would want to play with us either.”

“Bi the Way” is a male bisexual blog based in the UK that fields questions from newly out bi men and their concerned girlfriends. The site’s editor, David, points out that popular culture paints a different picture of female bisexuality — “there are a lot of female celebs flying the bisexual flag with pride, and that helps. Female bisexuality is viewed as something chic. Even if it’s not to everyone’s taste. It’s a bit like when you see Lady Gaga wearing a dress made of meat. You probably wouldn’t wear it yourself, but you know she looks awesome.”

It’s a double standard that permeates Western culture, but some new studies suggest it may be shifting. According to a study by Eric Anderson of Bath University in England, there are a growing number of college-aged straight men kissing each other. In the study of male university students, 89 percent had kissed each other on the lips, and 37 percent reported engaging in “sustained kissing.”

Anderson says that this trend stemmed from professional sports, and the recent popularity of soccer players sharing passionate kisses after goals. “That made kissing between men acceptable for college and high-school players. Then the players took the same behaviors to nights out in pubs, spreading the trend to non-athletes” Anderson reports to Live Science.

We see this come to life in the “gay chicken” videos on YouTube. Gay chicken is a game in which two straight, alpha-males make-out, and the first one to pull away is a “pussy.” In one YouTube video, two athletic-looking young men make out, while a crowd of people holding plastic cups, cheer them on, their phones held out. The boys only wear underwear, pressing against one and other as they kiss, not coming up for air for the full three minutes.

I polled my social network, and asked young men about their “bisexual” experiences. Aaron is 25 and doesn’t identify as bisexual, but he’s made out with his male friends. “I think good kissing is universal, I've made out with a ton of girls who aren’t half as good as some of the guys I’ve kissed.” Aaron says that during high school, and early college, it was just sort of part of the indie/ pop-punk scene he was a part of (think Pete Wentz or Connor O’Berst) but he’s left it behind. “I wouldn’t say I have crushes on guys anymore. Because now, I would never act on it. When you come out, straight dudes will respect you less. Maybe girls will too. I was just lucky that this all happened in a time of my life when it seemed like nothing mattered. When I still felt I could do anything.”

Oliver is 23 and does identify as bisexual. He started out kissing boys at parties too, in a sort of Jack-ass style, Kurt Cobain homage... but after realizing he had genuine crushes, it’s much more emotional. “There’s the physical aspect of it, I imagine resting my head on my boytoy’s chest…it’s more romantic in a way. It’s like when you just want to lay in bed and sleep all day with the person. With girls it is more exciting and there is an element of the chase.”

Bisexuality, The Next Generation.

Back at the bisexual-swinger party, behind a curtain in the back room, is group sex. The air is moist with body-heat and the smell of anal sex wafts from the room. In front of a mirror, are a set couples in the doggy-style position — both male-female and male-male. Throughout the night, party-goers have said this event has a different vibe than others. I heard that usually in the swinger world, women have the control and men are less active in initiating. But here, where men hit on other men, it feels like a celebration of male sexuality. Why is this so scary for their community? Is it because we condemn and dismiss male sexuality as a whole?

But the homophobia that came with AIDS has begun to disappear in younger generations. And the fight for gay rights has brought us to a time when most young people approve of gay marriage. Lee, a 26-year-old who identifies as bi told me: “There will always be homophobic assholes, but they are a growing minority, it’s very uncool and very un-pc to be homophobic. Those guys who have blonde girlfriends and identify as straight but won’t call you a fag when they are drunk. Maybe they dabbled in metrosexuality or watched queer eye or a logo show. But increasingly, there is less externalized homophobia.”

And the Internet has helped too — now there are stronger Bisexual resources, carving out more of a space in LGBTQ, there is a dialog around fluidity, and an opening up of what it means to be “queer.” David from Bi the Way continues to see more and more inquiries from young men. Perhaps with less external homophobia, and more guys challenging their internal homophobia with rounds of “chicken,” we are on the path for the bisexual male to finally come out of the closet. “I think by increasing bisexual visibility and promoting bi role-models we can do a lot to ease bi-phobia. In particular though we need more male bisexuals who are prepared to come out, stand-up and been counted” says David.