Labels and Street Signs: Navigating Gender & Orientation in the Global Village and Cyber-ghettos 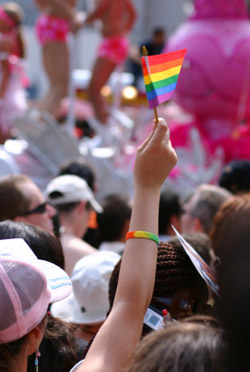 It's trendy to answer the question “who/what are you?” with a smirk and “I hate labels.” I like my labels. Go to the pantry and rip the labels off every can you find. Dinner will be always be a surprise. Is wanting to know what's inside just blind prejudice? When did blindness become lack of prejudice?

You've been there done that and bought the t-shirt: Love sees no gender. Love is color blind. Well... okay? Does saying that makes gender and race disappear? I see no difference = we're all the same. My soul curdles when I hear someone say they are “color blind”. “I never noticed you were black” is the same as “We're all white to me.”

I like differences. There's room on my labels for small print. I call myself Lesbian*. You may have to write to the factory for a complete list of contents. But when I wear it, it means: this is my identity, history, family, gender, political affiliation, future, tribe and hardwired in my DNA.

“...and it would be incorrect to say that lesbians associate, make love, live with women, for 'woman' has meaning only in heterosexual systems of thought and heterosexual economic systems. Lesbians are not women.” – Monique Wittig

Monique Wittig is an important lesbian theorist and philosopher credited with starting the French feminist movement. (She also got kicked out of the French Academy for mocking Freud – which makes her uber-sexy in my book.) Assume the lesbians mentioned are both biological and chromosomal female without physical or psychological sex ambiguity. (A big assumption that's only possible for a hypothetical abstract situation.) All variations aside, Wittig's argument is that lesbians are not “women” because women are an invention of society to partner with men. Women exist as a better half, helpmate or sex object. ( Every sentence with an object has a subject. If a “woman” is a sex object then the subject is... ? You got it. “The Man.”) Women are mothers, wives, sisters, etc. They are salt to men's pepper. Yin/yang. Book ends. What happens when the tool refuses to be used? When one book end becomes a windmill? When the salt shaker fills itself with dried flowers and runs off to live in a condiment-free commune? The shape of the thing hasn't changed but its purpose, its use has. It is something completely new.

Lesbian in this context is a gender identity, a reinvention, a reject of the “straight world”. She is out of order. Not broken but breaking the old to be something new. Or something very old. She is an iconoclast.

By refusing to live inside the social contract, she is a rebel without a gender. Without a gender definition. She is free to redefine herself. As lesbians have been doing for a long time. Just what and who a lesbian is, is contextual. She doesn't exist outside of her culture or era. Are the women who lived in Boston Marriages in the past century, lesbians? Was Sappho? What (if anything) do I have in common with them? I claim them as foremothers. Lesbian becomes almost an ethnicity.

When is a lesbian not a lesbian?

“The term 'sexual preference' is misleading because it implies that this attraction is a choice rather than an intrinsic personal characteristic. Sexual orientation is not necessarily the same as sexual behavior.”

Check the can. Does it say what percentage of your tuna sandwich may contain dolphin? Not all tuna is dolphin safe. Not every lesbian is penis-free. She may have one of her own (or someone else's). Or a drawer full. Remember contents may vary.

But people aren't that simple. If gender identity is multiple (add up the variations by individual and then factor in the genderfluid folk) then how do these dozens of possible genders converge to make potential orientations?

What is gender? What is gender identity? Me: Lesbian*. My personal asterisk includes at least one man. Why not call myself bisexual? It would be more orderly but less honest.

For example: I don't believe in “reformed homosexuals”. Those who found Jesus or went for the cure and are suddenly heterosexual. Is not having gay sex what makes someone straight? Changing what you do doesn't change what you are. If I understand this gay cure correctly then all heterosexual men must want to suck cock some just resist the urge better than others. Right?

The Ghetto-ization of the Internet

The Internet is so specialized you can find whoever you are or whoever you want. There are newsgroups for lesbians in heterosexual marriages, deaf transvestites, Jewish Unitarian Wiccans, pot-smoking Furries, S/M Christians, etc and etc.

Danah Boyd is a researcher at Microsoft Research New England and a Fellow at the Harvard University Berkman Center for Internet and Society. She was the keynote speaker at recent conference on the impact of social networking. Her research suggests that in spite of the assumed inclusivity of the world wide web, people tend to gravitate toward persons of their own race, class, and socioeconomic status in virtual communities just as they do in life.

Wherever we go it seems we are looking for ourselves. The more broadly we define ourselves, will we find ourselves seeking out a tailored clone with intense specificity? Or will we explode – expanding, rather than demolishing our labels – to better understand ourselves and other delicious, freaky, contradictory people.

Should I define myself (gender and orientation) by what I am, what I am doing, who I am doing it with? If I were sleeping with multiple men or looking for male partners I would call myself bisexual (though I wouldn't believe it) to protect other lesbians from the advances of men wanting to be “the next exception to the rule.” But when I say “I'm a lesbian” to a guy in a bar I mean the same thing lesbians (regardless of what they were called then) have meant for centuries: “Dude, you ain't getting any.”

My son argues that I've had sex with over 200 women. The argument goes something like this:

We do agree that I lost count a decade or so ago. More than once I've flirted with an attractive stranger only to discover we dated. Okay to forget the names of one night stands or party girls I swapped spit (and orgasms) with at an event – but a relationship? That just makes lesbians (asterisk or not) look bad.

I'm a dyke in wheelchair. I have four wheels, a motor and try not to run down pedestrians. Why not call myself a car? Because you aren't, Blanche. You aren't.
Tags:
Views: 1406
Related articles