The Girlfriend Game: Can I See Some I.D.? 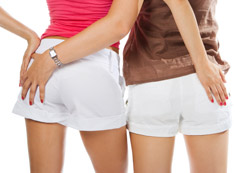 Lesbian? Gay? Bi-curious? Straight. Sexual identification isn’t always etched in stone. Sometimes, you can’t tell who the players are, even when you have the scorecard.

It was an understandable question. There were four of us at the dance that night. Suzie, the only one of us who actually owned a semi-formal dress, looked very feminine and flirty. There was Di, in her sensible knee-length black skirt; and Jessie, the girl who would do just about anything, looking (in Di’s word) “Seussian” in a red corduroy dress with black-and-white striped tights. Then there was me, glammed up in a tight, stretchy blue dress, hair pulled back by matching rhinestone butterflies.

Four women smoking together under the carport must have looked like two lesbian couples to the guy who came over to watch Jessie’s impressive Zippo tricks.

“Nobody’s dating anybody,” Di said. The only open lesbian of the group, she was our unofficial spokesperson. “We’re all just here as friends.”

I was dating someone, actually. But I’d found out about the off-campus, gay/lesbian/bi/trans-inclusive dance on short notice. My girlfriend already had plans to play guitar at a coffeehouse. But I didn’t let that ruin the evening. I was ready to party like it was 1999—because it was.

My alma mater, St. Mary’s, has a coed “sibling school” across the interstate, Notre Dame. In the late ’90s, the students and faculty of Notre Dame were split into two factions. The faction in power at ND believed that, as a Catholic school, Notre Dame could not be seen as in any way endorsing anything gay/lesbian/bi/trans. The school reserved the right to fire professors for being gay or lesbian, and wouldn’t endorse the GLBT student group. The other faction wanted sexual orientation added to the school’s non-discrimination policy and backed the student group.

The unofficial, unendorsed GLBT student group was called OUTReach ND, and they were sponsoring the dance. I belonged to a student group called the Feminist Collective. The Collective had received the dance invitation from OUTReach ND. The dance was held far off-campus, in the nearby city of Mishawaka. The historic mansion turned B&B once belonged to a family of wealthy industrialists. There are suits of armor on the front porch, and the bar has clouds painted on the ceiling. It was both fancy and schmancy. You could tell, because smoking was only allowed in the car port.

“So,” the cigarette-bumming guy said, “are you all gay, or what?”

“I’m not gay,” Di said. “I’m a lesbian. Having a separate label from gay men emphasizes that lesbians have their own separate and equal identity.”

The guy nodded his head, then asked me and Suzie, “Are you lesbians, or what?”

Although I knew I liked boys, when I came to St. Mary’s and took Intro to Psych as a freshman, I happened upon the Psych textbook’s definition of bisexuality. It said something like, “A person who engages in sexual behavior with people of both sexes; a person who is physically attracted to people of both sexes.” Hey, that’s me, I said to myself. Huh. All this time I thought it meant guys with mustaches, like Freddy Mercury.

Ever since that day, I’d been looking for excuses to wear my “bisexual” label like a new pair of jeans. Like a new pair of jeans that I wouldn’t wear to a family function or around my more conservative classmates, but which could be brought out around anyone who had dating potential. My soon-to-be-ex and her roommates were very cool with my new bisexual jeans.

“We don’t assign labels to ourselves,” Di answered for us.

Part of me was relieved. Part of me felt good not to need a label. On the other hand, I was at a GLBT dance. I’d been talking to a drag queen, Susan, at the bar. If Susan felt comfortable being “out” here, then surely it wouldn’t have hurt for me to try out my bi label here.

“That’s cool,” the guy said. “I’ve heard people say that out in California, but never before in the Midwest.”

For this Indiana girl, it did feel cool, even though I was itching to yell out, “I like girls!”

The ladies and I went back inside and stepped onto the too-small dance floor. The four of us squeezed onto the parquet, writhing and twisting in pure joy. The DJ surprised us all with Nine Inch Nails. Never before have I so wanted to bow down before the one I served and get what I deserved.

Less than a year later, I was working as a hostess at a downtown South Bend restaurant. I met a cute boy. On our third date, he asked me if I’d ever kissed a girl. I told him about my college relationship. He didn’t even flinch. We got married in 2002.

We settled in Mishawaka, just a stone’s throw away from the fabulous bed and breakfast. A charming quirk of the city of Mishawaka, Indiana, is the old Kamm’s Brewery complex. Now it houses, among other things, a GLBT resource center/bookstore, a gay bar called Truman’s, and Little T’s (a Truman’s spin-off: a gay-themed sports bar, complete with life-size cardboard cutout of Dennis Rodman). This Valentine’s Day, we went to a dance sponsored by the resource center.

My husband didn’t flinch when I told him I’d had a girlfriend, but that doesn’t mean he likes me wearing my bisexual jeans in public. He doesn’t understand why I feel so much sympathy for the GLBT community when I appear to most of the world to be a married straight woman. Yet I wonder still, after all these years, how I could fit that definition in the Psychology text, be honest about it, and still not need to wear a sign that reads, “This is a bisexual.” There’s honesty, and then there’s honesty with full disclosure. The former does not always require the latter.

When we arrived at the Valentine’s Day dance, my husband and I were clearly labeled as heterosexuals. We were invited to sit with the only other hetero couple in residence, Scarlet and Randy.

For the first hour of the dance, the DJ totally sucked. Even for this romantic occasion, the only ones moved by his cheesy songs were a few pairs of middle-aged lesbians. Scarlet and Randy went up to him and requested something more spunky. They came back to the table, and Scarlet announced, “The DJ hates us.”

So we sat and watched the few couples on the dance floor. But I wanted to do more than watch. It was a mix of the ’70s and Moulin Rouge versions of “Lady Marmalade” that finally got us all, gay, lesbian and straight alike, off our asses and onto the dance floor.

With my husband grinding on me, I was clearly wearing my “straight” label tonight. I didn’t dance with any beautiful girls, but at least I wasn’t going home alone. At the end of the night, when we were starting to get tired, I sat on my husband’s lap as we watched one beautiful girl on the dance floor.

My husband’s favorite phrase is: “I don’t care who you’re lickin’ or stickin’.” He means there’s much more to a person than her or his sexual orientation. This is undoubtedly true. But, should you happen to find yourself looking to meet a pretty lady at a GLBT dance, it might not hurt to wear a sign that says: “I like girls.”
Tags:
Views: 1654
Related articles