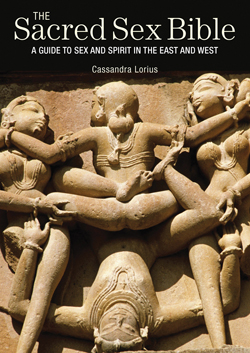 "In making love with a sense of the sacred, your body becomes a temple and your partner’s body a shrine."

The idea of “sacred sex” frightens some people. The independent erotica author Roy Askham recently started a blog called Sex and Spiritual Life. Its purpose is to ask the question, “Can sex be incorporated into a spiritual path?” Askham has written a novel that combines BDSM themes with the theme of spiritual progress. The protagonist, Edward, discovers that sexual desires and spiritual seeking are not incompatible. Askham has received both positive and negative feedback on the combination. One blog commenter wrote, “I think our earthly desires have little to do with our spiritual path, unless we allow them to interfere.”

Are sexual desires a form of spiritual interference, or a tool in the metaphysical toolbox? Early in 2010, I explored the subject of sex magic, culminating in the article “Blood Sugar Sex Magik.” It’s not an entirely easy topic to investigate, and armed with the little knowledge I had, I approached it with some reverent awe and trepidation. My witch-friend P.F. Newman warned me, “One of the classic ways of sexual magic is to invoke Venus, and should you wish more information on this subject, I suggest you summon her and beseech her for an interview. But beware of her price.”

Venus sounded scary. When I turned from Western to Eastern sex magic, I read in Kenneth Ray Stubbs’ classic Secret Sexual Positions: Ancient Techniques for Modern Lovers that Tantra requires an intense commitment to meditation. I concluded, “This is another reminder that sex magic is something very powerful and not to be entered into lightly.”

In a comment on the original article, Airen Wolf urged me to lighten up. “Really it's nothing to fear and can be wonderfully powerful and bonding between partners (or solo),” she wrote. “The energy is wild, chaotic and primal[ly] wonderful as the sex that generated it!” As I reread my sex magic article of over a year ago, I see that I’ve been too guarded, too timid. Once again, my mind was not fully open. Fortunately, I had another chance to explore the topic as I read Cassandra Lorius’ The Sacred Sex Bible: A Guide to Sex and Spirit in the East and West (Firefly Books, 2011).

Cassandra Lorius’ previous books include Tantric Sex, 101 Nights of Tantric Sex: How to Make Each Night a New Way to Sexual Ecstasy and Tantric Secrets: 7 Steps to the Best Sex of Your Life. Clearly, she is not afraid of Tantric practices, or of sharing them with a broad audience. Lorius continues to make sacred sex accessible in her 400-page newest release, illustrated with ancient art and modern couples. She devotes three chapters to the West, then three to the East.

Readers expecting to get to the sexual exercises right away have found the wrong book. The Sacred Sex Bible starts with goddess worship practices from ancient history. In the introduction, Lorius asserts, “In making love with a sense of the sacred, your body becomes a temple and your partner’s body a shrine. You use your bodies to worship one another and sex becomes a means of opening up the sacred dimensions of life as a whole.” Her early chapters explain how Western culture has lost a dimension of this attitude by turning away from goddess worship to a patriarchal cultural system that devalues the female body. The last vestiges of the goddess-worshipping, woman-valuing belief system were labeled as “witchcraft” and brutally repressed.

What Westerners can learn from the East, Lorius explains, include the ideas of life as interconnectedness, an interplay of energies. In “Blood Sugar Sex Magik,” I mentioned the union of the deities Kali-Shakti and Shiva. Lorius explains that in classical Tantric tradition, the male principle, Shiva, is envisioned as a pure consciousness, full of potential but static. The universe could not exist without the female principle, Kali-Shakti, to bring motion, animation, into being.

Without the two complementary equals, there can be no creation, no life, no universe, no ultimate dissolution and re-creation. From the relationship of Shiva and Kali-Shakti, we can learn about sex as an energy relationship – and that’s where the fun exercises come in. The exercises encourage pairs of lovers to revere one another’s bodies, seeing the goddess in the female body and the god in the male. Lorius doesn’t assume a heterosexual pairing, but makes these exercises accessible to all couples and to solo practitioners. Men are encouraged to find the feminine in themselves and women the masculine in themselves, creating a balance based in part on the Daoist equivalent of Tantra, the idea of yin and yang.

One of the subtleties I may have initially failed to grasp is the distinction between classical Tantra and neo-Tantra. Classical Tantra, Lorius explains, is a dynamic, living religious traditional encompassing a wide range of Hindu and Buddhist practices. Lorius does not excuse classical Tantra from its share of sexism. She notes that the writers of classical texts were male, with a few notable exceptions, and that classical Tantra’s focus on self-development sometimes comes at the expense of the (female) partner who participates in traditional Tantric rituals. “Tantric sex had nothing to do with better sex or orgasms,” Lorius writes. “It was sex in the service of a much bigger sense of awareness…”

Lorius differentiates classic Tantra from neo-Tantra, the form Westernized version that began to gain popularity in the U.S. in the 1960s. Sometimes called “California Tantra,” neo-Tantra is divorced from the cultural associations of its roots in India and Tibet. Neo-Tantra stresses couple relationships and positive body image. It’s less about adherence to a set of beliefs and more about what an individual or couple can learn from more experienced teachers. In modern practice, sacred sex is a way of using a sexual relationship not for personal pleasure, but for building a deep connection between two people. This connection is so deep that it naturally leads to the experience of bliss, defined as a glimpse of the fundamental interconnectedness of all life, a moment of pure consciousness.

Who’s afraid of pure consciousness? Not me. Not anymore.

Untied From the Stake

Sacred sex should be approached with the proper respect due to any human interaction, but not necessarily with the fear and trembling that I first imagined. As Cassandra Lorius tells it, it’s all about a connection that encourages openness, but also a fundamental acceptance of one’s partner’s body, mind and soul. We can all get down with the respect and acceptance.

And still I rise. The fun of being a sex writer is that I get to learn, grow, stretch my boundaries and get more comfortable in my own skin. Indeed, this is the fun part of being a sexual being. Incorporating goddess worship or another form of spirituality into a sexual relationship doesn’t need to come with a black label, but it does come as a challenge. It challenges me to use my sexual self to reach beyond the familiar and attempt to touch the sky. I may even work up the nerve to say hey to Venus while I’m up there. If it challenges you in a different way, I think the universe will be okay with that, too.
Tags:
Views: 1899
Related articles