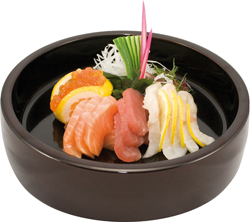 It’s Supposed to Smell Like Pussy
It’s a staple of adolescent comedy: pussies smell like fish. There’s the one about the blind man who passes the fish store and says, “Good morning, ladies!”

Another version holds that Adam (the Biblical first man) stopped letting Eve bathe in the stream that ran through the Garden of Eden after she made “the fish smell like it.” Madonna cracked this one between songs while on tour several years ago. There’s even a rhyme:

"Seven wise men with knowledge so fine,
created a pussy to their design...
Fifth was a fisherman,
nasty as hell,
threw in a fish and gave it a smell..."

It may be funny, but is it true? Do vaginas really smell like fish? Ask a hundred people what pussies smell like and you may get a hundred different answers. Eve Ensler did just that and collected some of the answers in The Vagina Monologues. A (very subjective) top five might include:

Fish appears on Ensler’s list, along with a variety of other organic perfumes both pleasant and unpleasant. Some of the women in the monologues are not ashamed of their natural smells. “My vagina doesn’t need to be cleaned up. It smells good already. Not like rose petals,” goes the monologue entitled “My Angry Vagina.” “Don’t believe him when he tells you it smells like rose petals when it’s supposed to smell like pussy.”

Still, some who tried to pin down the smell of pussy were reminded of the ocean, and the South Pacific in particular. Another unscientific poll on the Internet turns up some more interesting responses:

Chicken soup with a load of pennies in it
Mango pork
Salty milk with coins in it
Somewhat salty and alkaline, like licking a big fleshy battery

Semen, because it is highly alkaline, can disrupt the pussy’s pH balance and cause scents that are slightly “off.” Is semen the culprit behind the pussy-fish stink link? Or are the culprits those redheads with the seashell bras who are always crooning about life under the sea?

Is the mythical mermaid to blame for our culture’s association between women’s tails and fish-tailed women? There are two fish-schools of thought on this subject.

In her book A Mermaid’s Tale, Amanda Adams finds little evidence that ancient cultures made the connection between fish and women. Adams explains that the oldest depictions of mer-creatures are decidedly male. The ancient Babylonians considered the fish-god Oannes the king of the world’s first city. When (female) mermaids first appear in art and literature, they are Oannes’ opposite: malevolent nature-spirits who destroy rather than create and encourage men to leave civilization behind.

On the other flipper is Yemaya, known to practitioners of Santeria and other religions based in Western Africa. Yemaya, sometimes depicted as a mermaid with a white and blue fish tail, is the mother of all waters. Giving new meaning to “your water broke,” she literally gave birth to the oceans, lakes and rivers.

Barbara G. Walker, in The Woman’s Encyclopedia of Myths and Secrets, finds all kinds of ancient connections between the goddesses and the smell of fish. She writes, “A world-wide symbol of the Great Mother [Goddess] was the pointed-oval sign of the yoni [vulva], known as the vesica piscis, Vessel of the Fish. It was associated with the ‘Fishy Smell’ that Hindus made the title of the yonic Goddess herself, because they said women’s genitals smelled like fish.”

Walker claims Christianity even appropriated the pointed-oval symbol in its ichthys, the fish-symbol said to represent Jesus (the inspiration for a thousand bumper stickers in recent decades). She thinks ancient folks associated Jesus’ mother Mary with the Greek goddess Aphrodite-Marina, who gave birth to all the world’s sea-creatures. Certainly Aphrodite and Mary were both given the title Stella Maris, or Star of the Sea. The nickname persists; “Mary Star of the Sea” is the name of both Key West’s Catholic church and an album by Billy Corgan’s post-Smashing Pumpkins band Zwan. Either way, it seems the fish-vagina relationship is less a mermaid thing and more a goddess thing.

Magical Smell of the Sea

Whether or not you laugh at the jokes, whether you blame Ariel for the association or not, the question remains: is smelling like fish a bad thing? Some of us eat fish, so it must smell good enough to eat. There’s the smell of fish, which can whet our appetites, and then there’s fish stank, which can kill it.

A vagina that smells gently of the sea, however, is no cause for alarm. In fact, it’s a cause for celebration. In Guiseppe Tomasi di Lampedusa’s 1957 short story “The Professor and the Siren,” the protagonist says of the mermaid, “From her arose what I have wrongly called a scent but was more a magic smell of the sea, of youthful voluptuousness.” Magic and Youthful Voluptuousness sounds like the latest designer fragrance from Victoria’s Secret. If that’s what my lover thinks of when he sniffs my pussy, that’s a good thing.
Tags:
Views: 2388
Related articles