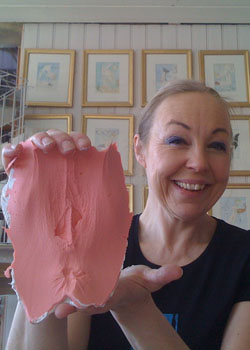 Just thirty minutes after meeting this beautiful Swedish blonde, she had my pants off, my legs in the air and her hands on my pussy. The curtains were thrown open to the glorious spring day outside as two of my friends looks on, grinning from ear to ear. They pretty much expected this would happen as they drove me out to the country house of Ylva Maria Thompson.
Ylva is an artist who works in painting, body cast and graphic work. Before she got to my pussy, I chatted with her about her work. Here's an except from our conversation:


Ylva: I consider myself to be a feminist artist, but more of a neo-feminist, a sex positive feminist.

Midori: What are the various emotional words that you associate with women’s bodies?

Ylva: Beauty, strength, power, the female body has a lot of power. It’s not always soft. It’s a hard word to use. But contrasts. Full of contrasts. Full of ambiguity. Because you have both hope and love and pain and fear. All these different sides to it.

I’m very much aware that when I talk about this I talk about myself but this I think is true for most women. We have a part that is fear. We want to live fully but we can’t really do it because there’s always a threat to us. I don’t know if men feel the same way. But when it comes to sexuality it’s always a bit dangerous for a woman. And I always try to fight the fear and the danger, in my life, in my art, in what I write and what I say. Without denying it, because we have to be aware but we have to fight it too. I think we’ve come a long way in Sweden. Men have a lot of respect for women in Sweden.

Midori: What are you favorite Swedish words for female genitalia?

Ylva: Fitta. It’s the most vulgar word. I like that because it feels more sexual than any other word. It’s also a political statement to use it. It’s like when queer people start calling themselves queer. It’s the same thing in taking back the word.

Mutta, it’s a little bit softer, a little bit more childish maybe. It’s a bit regional too. If you go down to the south of Sweden and say Mutta they say ‘that’s vulgar, you can’t say mutta’ and they say it’s better if I say fitta.
For me here in Stockholm Mutta is a bit softer and sweeter.

Love lips, or ‘Kärleksläppar’ is a beautiful word. A friend of mine taught me that one maybe a year ago. Normally in Swedish it’s the word ‘blygsel läppar’ which approximately means lips of shame, so she started using love lips instead.

Venusberg is beautiful too. Mount Venus.

Snippa we use when talking to children. It’s quite new. RFSU had a big campaign to use it. It’s a made up word. It’s from Snopp, which is kids word for penis, so they made a feminine word. They found out that people working with children needed a word to use with them. Some of them didn’t even use a word. They didn’t say anything. They never mentioned it. They could mention snopp several times a day but never talk about the snippa. It’s actually a political problem. 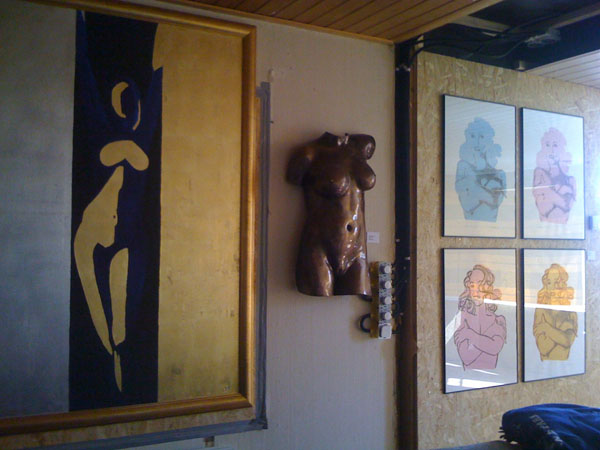 Midori: How did your pussy cast art start?

Ylva: The project is called “Anonymous Exhibitionist”. I told the women who wanted to be in the project that they had a fantastic chance to show their pussies at art galleries, museum, art shows around the world without anybody knowing it was them.

When I was 15 years old I saw that my inner love lips were hanging outside and I thought it was ugly, that it wasn’t normal. Later I discovered that it was totally all right. Today many young girls go to a plastic surgeon for labiaplasty. They don’t need to. They can have complications. I think it’s awful. The beauty of the pussy is that every pussy is different. That’s one reason I wanted to do it, to create an opportunity for people to compare themselves and look at other people’s pussies.

The other reason is that the pussy has been hidden away. We’re taught that we shouldn’t show it to any body. That’s the same as saying this part of your body is so ugly you shouldn't show it and that’s awful. So I wanted to do the opposite and tell people that this part is so beautiful we all need to look at it.

Midori: Do women talk to you about their thoughts and feelings during the casting?

Ylva: Yes, it happens a lot. It’s like Eves Ensler says, when women start talking about their pussies they can’t stop. There is a really big need to talk about our bodies, our sexuality, our situations, experiences we’ve had.

I said to one woman, “your pussy’s so fresh, it looks like you’ve hardly used it at all.” She said “that’s true, and I regret that.” She was 60 years old and she had one man when she was young, and she had just now found a lover. She said “I wish I had more sex in my life, but I’m starting to do it now.” That was very touching. She told me all about how she discovered her sexuality so late in life.

Of course I hear stories about people having been abused and all the sorrow that they’ve been carrying around. But to talk about it, and to do something about it that is creative with the pussy like making a cast, is kind of healing. I’ve met a few women who’ve done it just to get that kind of healing. Normally when you spread your leg for someone it’s your doctor and it’s no fun. To come to me is a totally different thing.

I had this very sad meeting with this woman who had cancer. They were going to take away most of her vagina because of tumors. So wanted to make a goodbye present for her self. I meet people who want to do it for an adventure. Now that I’ve finished the project, people come to me for commission for themselves or for their lover. That’s really fun. Of course they tell me about their sexual adventures!

I met one girl, between 25 and 30 years old, who had never looked at her pussy. She’d never taken a mirror to look at her self. She just said “I’m so afraid it’s grotesque” When it was time to pick up her cast she said “I’m a bit afraid to come and collect it.” I gave it to her and she had this big relief sigh and said “it looks good” that was funny. It’s so strange that she’d never looked at it. I think it was a beginning for her. Once she saw the cast she could gather enough courage to look at it in real life. 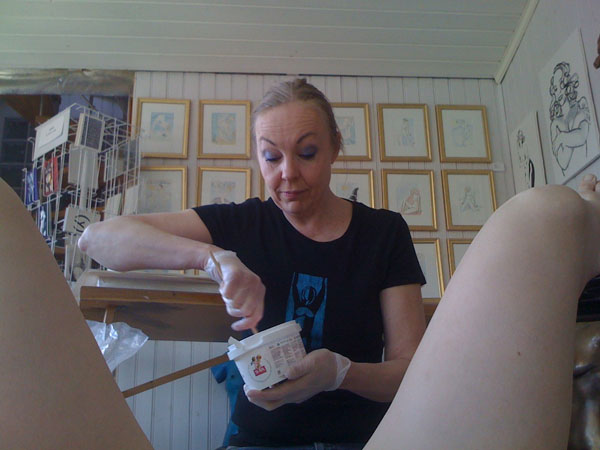 Midori: What are you working on now?

Ylva: I have a very complicated project. I want to do something with penises but that’s very hard.

It started out when I made a wax penis for a prosthetics for a female to male transgender person. When you do the transition in Sweden you’re offered a prosthetic if you want it. You can have it permanently or you can have it while you are deciding what to do, whether you want an operation or not. The person that made this prosthetics was a heterosexual man and hadn’t really looked at many penises. They didn’t look very natural. He asked me if I can do a cast for them to make a prosthetic from. I talked to the prosthetic maker and we did that as a work.

After that I started thinking so much about penises. During the process I made a lot of photos and few casts of different penises and I would like to do something with them. To have an exhibition that comments on what it is to be male, what it is to have a penis, approximately in the same way I did with the pussies. But it’s hard. I’ve not found any museums or art gallery or exhibition spaces that want to take it on yet.

I think it’s more politically acceptable to do things with women’s bodies today. The natural thing to happen now would be for women start to discover men’s bodies and explore them more and more. I think that’s what’s going to happen next. We’ve explored our own bodies now take the next step. Explore the male body.

Midori: What are the challenges you’re encountering in this series?

Ylva: It’s not hard to find male models but I have problems with their attitudes. They say “oh you want to do something with my limp penis? Oh no, I don’t want to do that. It should be hard and erect. Because it looks small when limp. You can’t do that.” That’s one problem. Then they say “I don’t want to be part of your project if it should be limp.”

It’s hard to get men to talk about their penises in an honest way. That’s interesting and that’s what I have to explore. It’s as if they feel a woman expects something and if they can’t offer that they are not real men. Men’s attitudes towards their bodies and their penises is kind of representative as to how men’s minds work. Then sometimes I’m very surprised. I meet some men who are really relaxed about them selves. But that’s not as interesting as the ones who have all these thoughts – especially the “it looks so small” thoughts. When the cast is done they say it looks too small.

On that note, how about we cast your pussy! 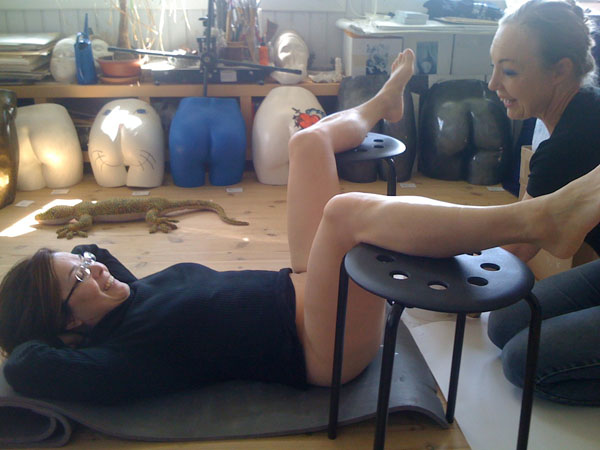