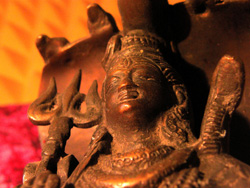 Sex magic may be witchcraft’s greatest open secret, and very much real. When I first undertook the writing of this article, I thought it was something I wanted to explore with my partner. As I dug deeper, I realized sex magic is something very powerful, and best left to practitioners with more skills and knowledge than me. Nonetheless, it’s a fascinating topic, and one worth exploring.

She Moves in Mysterious Ways

One of my all-time favorite songs is “Mysterious Ways,” from U2’s 1991 Achtung Baby album. The song has two levels: it’s a secular love song, but it’s a sacred one as well, about the female aspect of a God who, as the lyrics quote from the Bible, “moves in mysterious ways.” Once a staple on MTV, the video featured a Middle Eastern belly dancer, reinforcing the goddess imagery. Belly dancing, at least according to folklore, originated in the worship of ancient Middle Eastern goddesses. The famous “Dance of the Seven Veils” evoked Inanna’s descent into the Underworld to rescue her lover.

The U2 song contains the lines, “If you wanna kiss the sky, better learn how to kneel. On your knees, boy.” In its sacred sense, it seems to refer to prayer. In its secular sense, it refers to kneeling to give a woman (or a goddess) oral sex. This seems to be a particular favorite sexual position to the guys of U2: later, in “Big Girls Are Best,“ they would revisit it. Perhaps the double meanings were intended to be combined, as in the gay community, where “going to church” has the additional meaning of giving head.

That same year, the Red Hot Chili Peppers released the album Blood Sugar Sex Magik. At first the title sounded to me like four random, albeit rather cool, words. Then I realized “blood sugar” was a real thing. Was “sex magik?” In 1991, when I was in my early teens, I didn’t know. My brother was the Red Hot Chili Peppers fan in the house; I can’t even remember hearing the title track until years later. “Blood Sugar Sex Magik,” the song, is quite explicit in its dual references to sex and a higher consciousness. “Everywoman has a piece of Aphrodite/Copulate to create a state of sexual light” are just a sample of the lyrics.

I’m starting to learn that “sex magik” (or magic, also sometimes spelled with a “ck“) is very much real. When I first undertook the writing of this article, I thought it was something I wanted to explore with my partner. Over the course of my research, I realized sex magic is something very powerful, perhaps even dangerous, and best left to practitioners with more skills and knowledge than me. Nonetheless, it’s a fascinating topic, and one worth exploring.

Sex magic may be witchcraft’s greatest open secret. Granted, I live in a small city, but the reference section of my local library was still surprisingly barren on the topic. Neither Robbins’s Encyclopedia of Witchcraft and Demonology nor Guiley’s The Encyclopedia of Witches, Witchcraft and Wicca, Third Edition has entries for “sex magic.” Robbins’s encyclopedia does contain eight full pages on “Sexual Relations with Devils,” including one explicit illustration and a fifteenth-century description of the devil’s penis:

“This was generally sinuous, pointed, and snake-like, made sometimes of half-iron and half-flesh, and other times wholly of horn, and commonly forked like a serpent’s tongue; he customarily performed both coitus and pederasty at once, while sometimes a third prong reached to his lover’s mouth.” While this does sound as if it could be fun, it wasn’t the information I was seeking.

For further enlightenment I turned to P.F. Newman, a practicing witch and one of my online social networking friends. In a private e-mail, I asked Newman, “What is sex magic? How did you first learn about it?“ Newman sent me the following reply:

“Sex is a two-edged sword without magic, so it is logical that it is an even deadlier thing when used for magic. It is also a known fact that love magic doesn't work. Or more precisely, casting a spell to make someone love you is a terrible thing - terribly effective and works ruin. So much wiser to cast a spell to correct yourself and make yourself ready and worthy to draw the right lover, not the passing desire of the moment.

“I learned about love magic from my mother. She knows the ways of the craft much better than I, for she was a true master and I am more of a student. I requested her advice about love spells and got quite a lecture, which I didn't believe. So I went to my spellbooks, and found quite a lot written on the matter from Silver Ravenwolf's To Ride a Silver Broomstick about the consequences of casting love spells incorrectly. So since then, I have cast love spells, but have neglected to name a specific man. This allows the Goddess to choose my partner, should she be so willing, without violating the primary law of respecting the free will of all people. This includes any man you intend to have.

That price sounded rather ominous, so I chose not to invoke the wrath of the goddess by disturbing her. Instead, I started reading everything I could get my hands on about sex magic.

Venus, or Aphrodite, is one deity who invites erotic worship; another is the Hindu god Kama. The word “kama” means “love, pleasure, sexual gratification, or desire.” As a deity, Kama resembles Venus’s son Cupid, shooting flower-tipped arrows that produce love in whomever they hit. He inspired the Kama Sutra, a collection of advice on winning success in love, sex and wealth and virtue. The Kama Sutra, in turn, inspired the Hindu and Buddhist philosophies of Tantra. Tantric philosophy embraces all aspects of life and death and uses both good and bad experiences to promote enlightenment. In the Hindu school of Tantra, the goddess Kali (or Shakti, or Shakti-Kali) is revered as the source of creation, along with the god Shiva. Kali is symbolized as a lotus flower and/or as a sacred yoni, a representation of the vulva. Shiva’s corresponding symbols are the jewel and the lingam, a representation of a phallus. Their union is revered and imitated by worshippers in both private and public sexual ceremonies.

While followers of Tantra have done things like make their homes in graveyards and meditate on top of corpses to embrace death, Tantra is better known in the Western world for indulgent, often athletic sexual practices. “Tantra, indeed, is a path, often requiring many years of commitment to various meditations…This path is for those seeking more than a new romantic or sexual skill,” warns Kenneth Ray Stubbs. This is another reminder that sex magic is something very powerful and not to be entered into lightly.

On the other hand, one school of sex magic, sometimes referred to as Neo-Tantra, has more casual followers. Among them is Jeffery Tye of the online Kama Sutra Temple. He writes, “Sex is one of the most (some say the most) powerful energies on the planet. Within our loins lies an energy that has the potential to create any reality we want. Unfortunately, most humans have a love/hate relationship with sex that is reflected in many ways (i.e., unsafe promiscuity, self-destructive perversions, denial, shutdown, religious intolerance, rape, abuse, etc.). Religion has done much to suppress our divine sexual nature and has kept the masses ignorant of the potential uses of sexual energy… Sex Magic is based on the belief that the most powerful moment of human existence is the orgasm. Sex Magic is the art of utilizing sexual orgasm to create a reality and/or expand consciousness. All senses and psychic powers are heightened during orgasm.”

Those powers can then be focused, through visualization, on turning some wish or desire, sexual or otherwise, into a concrete reality. That, as I now understand it, is sex magic in a nutshell.

Sex and the Modern Witch

Tantric practices have played an important role in the re-introduction of magic into Western society in the late nineteenth and twentieth centuries. Tantra’s influence on modern magical practice comes, in part, through the notorious twentieth-century Satanist and witch Aleister Crowley. Crowley was a member of the Ordo Templi Orientis, an early twentieth-century magical cult, and in 1922 became its leader, rewriting many of the order’s rituals. The OTO was founded by Karl Kellner, a German who had studied with two Tantric practitioners from India, from whom he learned the secret of “the sexual current.”

Crowley, in turn, influenced Austin Osman Spare, who used sex magic for implanting suggestions into the practitioner’s own subconscious mind and for channeling past lives. Osman Spare’s philosophy influenced the Chaos school of magic.

Chaos magic rejects dogma and encourages practitioners to use magic as a means to an end, using whatever methods work. Chaos magicians seek power, greater knowledge, and heightened perception using an eclectic mix of magical traditions. One chaos ritual involves meditating on the death of self during the act of sex, followed by ecstatic laughter. The energy of this ritual is then used by the magician to gain whatever he or she desires.

All of these magical traditions overlap and interact. People who practice magic adapt them for their own purposes, skills and sets of knowledge. As an expression of the energy created by one or more people in the act of sex, sex magic is a powerful reality. However one chooses to channel that energy, the power of the human experience’s most fundamentally pleasurable act is undeniable.
Tags:
Views: 1693
Related articles