The Venus Pendulum: A Brief History of Women and Sex 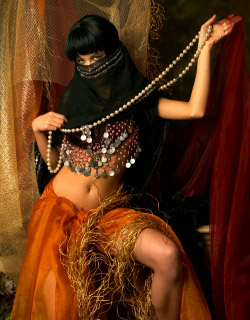 How do you condense the history of female sexuality into 1500-ish words? With dignity, aplomb, and an occasional dig at the Victorians.

Ode to a Loved One

Lest as the immortal gods is he,
The youth who fondly sits by thee,
And hears and sees thee, all the while,
Softly speaks and sweetly smile.

’Twas this deprived my soul of rest,
And raised such tumults in my breast;
For, while I gazed, in transport tossed,
My breath was gone, my voice was lost;

My bosom glowed; the subtle flame
Ran quick through all my vital frame;
O’er my dim eyes a darkness hung;
My ears with hollow murmurs rung;

In dewy damps my limbs were chilled;
My blood with gentle horrors thrilled:
My feeble pulse forgot to play;
I fainted, sunk, and died away.


Before there was history, there was pre-history, which, come to think of it, is kind of like cultural foreplay. 411 from the dawn-of-recorded-time newsreel provides proof-positive that before the plot thickened and balance of gender roles shifted from Venus-centric to penis-centric, the sexual prowess of women was a matter of awe and inspiration. Whether or not you believe the “cunt”roversial theory espoused by Brit gynecologist and just plain downright curious fellow Anthony Perks (as published in the Journal of the Royal Society of Medicine) that Stonehenge is in actuality a wooly mammoth fertility symbol constructed in the shape of a giant pussy—at least, when viewed from a bird’s-eye perspective—there’s no denying that the Venus of Willendorf, a four-inch carved figurine dating back to the Paleolithic era is one hot prehistoric mama. (Just the artifacts, Ma’am.)

Sex is a force of biology fueled by emotion, imagination and desire that is filtered through the lens of whatever society that by chance or choice, we call home. Sex. Sexuality. Sexual identity. These are things define us as much as we define them.

“To summarize sexual history is the more difficult for the fact that it is almost impossible to view it objectively,” wrote renowned social scientist Gordon Rattray Taylor in his epic homage to the carnal pantheon, Sex in History (Thames & Hudson, Ltd., 1952). “From earliest youth we are taught to approve and condemn, and these judgments derive from buried emotions, so that they are held with great force and passion. All judgment tends to be egocentric, but in this field unusually so: The very word moral is derived from mores, customs. The moral is what is customary—and what is customary constantly changes.”

According to mystical feminist Vickie Noble (co-creator of the Motherpeace tarot deck), “Modern Western women can date our sacred sexual beginnings at least to the communities of Catal Huyuk (circa 7,000 or 11,000 BCE, depending on whose data you believe) and Jericho.” Basing her conjectures on the works of gyno-centric anthropologist Marija Gimbutas, Noble posits that in Neolithic Europe, women ran the show. “They built shrines to the Goddess, where female priestesses facilitated rituals of initiation, with music, dance and meditation, in rooms adorned with breasts and bulls’ heads and horns.” (Gimbutas notes that a bull’s head has the same anatomical configuration as the uterus and fallopian tubes.)

In the Taoist culture that characterized China’s Chou Dynasty (770-222 BCE) it was held that men and women represented two distinct energies: yin and yang. While females were said to have an infinite supply of yin, male yang was the fossil fuel of its day—and rationing was strictly enforced. According to tradition, the consequences of man loosing his lotus juice prior to providing his partner with multiple orgasms (which allowed him to put the requisite feminine tiger in his tank) could range from contracting diseases…to dropping dead. Masturbation, was verboten to Chou-era men, but women were encouraged to diddle their pussies freely and with abandon.

Then, inevitably, the pendulum (or in this case, the penis) swings … or is that swung?

“We can read about the downfall of the Goddess cultures and the sexuality that they embodied in the horrendous stories of the Old Testament,” writes Noble. ‘Joshua fit the battle of Jericho…’ is a historic tale told by the victors about the vanquished ancient, sacred women who had kept the rites of the Goddess since time immemorial. As the Old Testament makes vividly clear, the overthrow of the ancient Goddess religion and the ‘Whore of Babylon’ was not easy or quick, but went on for many millennia with a vengeance.”

From Adulation to Misogyny

The history of female sexuality is a catalogue of both adulation and misogyny, exultation and ignominy. As global cultures shifted from the worship of many gods—both male and female—to ‘god the father,’ the power of the matriarch, symbolized by arcane magical forces and gloried female sexuality, was inverted and rendered perverse. What once was splendid became shameful. That which had been celebrated was now abhorred. Yes, ladies and gentlemen, welcome to the wonderful world of testosterone poisoning. Slip into your chastity belt, lower your hems and lock your knees in an uptight position, it’s going to be a long, bumpy flight.

The good news is that desire subverted does not die; it merely evolves. That which is forced beneath the surface engenders a massive labyrinth of intertwining roots that from time to time, force growth upward to escape the subterranean stranglehold of patriarchal repression. Parting the moist, fecund soil in far-flung oases and the rare, fertile earth of clandestine gardens, peculiar plants bearing strange, enticing fruits and bold intoxicating flowers sprang forth to seduce the senses and confound the culture of puritans.

From under the thumb of such taboos emerged surreptitious sub-cultures, decadent demimondes—and a handful of bawdy souls who just didn’t give a damn. In haute society, courtesans bloomed and were plucked like hothouse flowers. Cleverness combined with subterfuge to create cross-dressing false identities for same-sex lovers who defied convention, right under convention’s nose. Chaucer and Rabelais regaled the world with a ribald peasantry, who happily plunged through life feasting, drinking, belching, boasting and bedding whomever they pleased.

Of course, the Victorians were practically no fun at all. Sex was for procreation. Period. End of story. Any woman who sought sex outside of marriage, or God forbid, actually enjoyed the attentions of someone other than her husband, was considered a pervert and a sinner. In The Physician and Sexuality in Victorian America authors John S. Haller Jr. and Robin M. Haller, relate that during the Victorian era, a woman of loose virtue or dubious sexual orientation was looked upon as an “ominous indication of national decay.”

Experts of the day added more wet blankets to the fire: In The Functions and Disorders of the Reproductive Organs, William Acton suggested that women lacked sexual urges altogether. Superintendent of the Purity Department of the Women’s Christian Temperance Union, Mary Wood Allen, M.D. decreed: “the most genuine love between a husband and a wife existed in the lofty sphere of platonic embrace.” Freud, who hypothesized that clit was kind of like a penis—only a lot smaller and not nearly as cool—wasn’t much help, either.

And then, dragging its ass, kicking and screaming, the pendulum began to swing back.

With the advent of birth control, as well as significant improvements in personal hygiene brought about by the Industrial Revolution, women escaped the specter of sex that was often literally dirty and dangerous for passion that was figuratively filthy and fun. In 1949, Simone De Beauvoir’s The Second Sex, debuted. In this cornerstone of contemporary feminist doctrine, de Beauvoir championed the cause of sex for pleasure, and once and for all elevated the clit to its rightful seat on the throne of love—or at least, in the lap on that throne.

By the ’60s, “free love” was becoming de rigeur. Enlightened women delved into the ancient mists to embrace their inner Goddesses once more. Throwing off the shackles of “male oppression,” they offered up flaming brassieres as burnt sacrifices. In counterpoint, the mainstreaming of sexual imagery in the form of Playboy and Penthouse centerfolds, ensured that copious amounts of jiggling breasts were pretty much everywhere. Although some protested such icons objectified women, the paradigm was eventually turned on its head by forward-thinking feministas who could see the fundamental clout of a Marilyn Monroe for what it was—a steel-jawed soul trap camouflaged by a husky whisper. Women found a way to retool the feminine force men had co-opted, and claim it for their own. These days, women throng to thongs and push-up bras as an expression of female sexual empowerment.