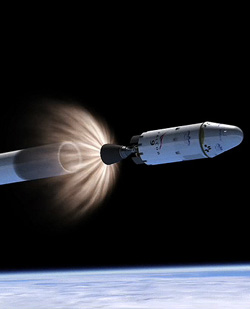 Sometimes when you try to connect the dots in “the big picture,” the universe hands you a shiny piece of cosmic synchronicity that simply makes you smile. For example: This week, on the SexIs home front, we are ecstatic to be celebrating our One Year Anniversary with the incomparable Nina Hartley. Nina’s candor, savvy and thoughtful commentary have made Tuesdays With Nina a SexIs mainstay.

While we prepare to blast off for Nina’s second year of bold new adventures in sex advice, Tuesday also happens to be big day

Houston, we have lift-off... 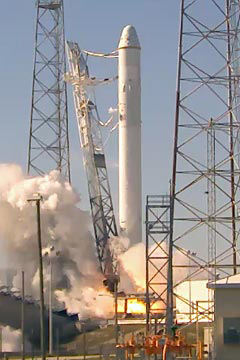 for the world at large, as President Obama and proponents of space travel around the globe await the much anticipated launch of the first ever privately manufactured spacecraft from Cape Canaveral, which may usher in a whole new era of 21st Century space exploration.

Of course, when I saw the picture of the Dragon rocket, having been in this business for as long as I have, what immediately sprang to mind? Dildos in Space! When I learned the manufacturer is a company called SpaceX, the permutations began to whirl. What if they changed the name to SpaceXXX, or perhaps went the NASCAR route and got a sex toy maker to sponsor the rocket? Or better yet, found a prophylactic firm to pony up for an advertising wrap in the form of a giant condom? “One small step for mankind, one giant leap for safer sex… “

Also on SexIs This Week:

Monday: In Postcards from a Sex Nerd, Midori reports on a very different kind of Japanese cathouse. Monday afternoon, Cherry Trifle explores the “Déjà Vu Dating” phenomenon to try to uncover why relationship history so often repeats itself. Oh, the humanity!

Tuesday: Em & Lo offer insights into the benefits of putting your own sexual house in order before inviting guests or long-term investors to join you.

Thursday: The Bloggess juggles three cats, a live chainsaw and a flaming bust of Ludwig Von Beethoven… or not. In the afternoon, treat yourself to a bite of chocolate, as Kal Cobalt explores the enduring carnal connection between cocoa and amour for The Appetites Project.