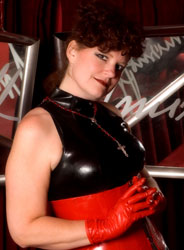 Ottawa, Canada: Miss Jenn, a statuesque redhead, sat before me in a dark and heavily air-conditioned restaurant in downtown Ottawa. We came in seeking refuge from the suffocating heat that’s the trademark of summers in Canada’s capital city.

She is a self-described kinkster, a dominant and the proprietrix of Breathless, Ottawa’s alternative community center.

What’s remarkable is that this is Ottawa. If Toronto’s reputation is “Toronto the Good,” then Ottawa is known as “Ottawa the Dull & Square.” If Mr. Rogers were a French-English bilingual government-accountant and a closeted homo, that would be Ottawa. Yet here in squaresville pervs, freaks and alternatives have their very own clubhouse.

As a serious kinkster with no place to party, Miss Jenn had hosted parties at her home for years. Once her parties outgrew her place, she spent two years renting space and growing a regular underground party circuit. Eventually, she tired of dragging the SM furniture around town, ruining her car and furniture in the process. She began looking for a permanent home, enduring one hostile rejection after another. No one wanted to rent to "weirdos" and ruin their reputation. Then Miss Jenn got a tip from Shelley Taylor of Venus Envy, a celebrated local sex-positive activist, about an interesting space right downtown. Initially resistant, but reasonable, the landlord heard her out and gave her a six-month trial period. That was five years ago—and the landlord is happy as can be with his reliable and polite weirdo tenants.

Miss Jenn's favorite event of the year is the Unholy Harvest, a three-day women’s leather conference. The event brings together around 70 wild women who suck, fuck and lick their way through the weekend. The schedule is non-stop with workshops, hard play, talent shows, erotic movie screenings and a cabaret. Miss Jenn provides the space and decoration, but otherwise, she enjoys a busman’s holiday and plays as wild as she can at Unholy Harvest. She loves the event because the sexual energy there is by far the most powerful of all that she’s enjoyed, with more intense scenes than any other she’s ever witnessed in the space. Along with the steamy play, deep friendships are formed in this rare permissive environment.

Her other favorite event at Breathless is in complete contrast to the Unholy Harvest. It’s the monthly game night, a small and sweet event open to the public where card and board games provide the excuse for conversations and socializing. It allows the general community, neighbors and non-members to meet the members and discover that they don’t have two heads and do wear cardigans.

Unlike many other venues where erotic explorations happen, such as swinger clubs and sex clubs, Miss Jenn sets a tough membership standard. Many places sell memberships to anyone who can afford membership fees and provide ID proving they are over the local legal age. This means that any gawkers, rude idiots or boundary-challenged jerks can come in and slime over other people’s good times. But not so at Breathless. You must be known and someone has to vouch for you. This way the community grows itself at its own pace, fostering a supportive and safe environment, and Miss Jenn doesn’t have to be the arbiter of membership.

“I’ve never fit in. No one got my humor or eroticism. I’ve finally found a spot where I fit in and am accepted. I’ve found some place to be me,” says Miss Jenn.

Some people struggle all their lives to force themselves into depressing conformity. Square pegs living sadly in round holes. Others find some power tools and carve out their own perfect little holes to fit in and party in. Miss Jenn has created a space that welcomes everybody, regardless of where they fit. Breathless is remarkable because it provides a place to play and also reaches out to the general community to help promote tolerance toward their kinky neighbors.