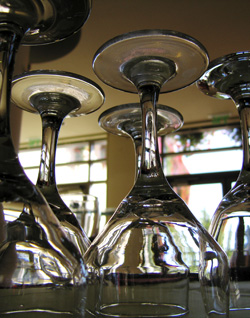 Eli Ratner, Jerusalem
This past weekend, I organized a “Butch Brunch” social meet-up in the East Village here in New York City. Brunching is such a “thing” here, more so than in any other city I’ve lived in. In Seattle, if you want to get together with your friends, you have coffee. In Colorado, where I lived for a few years after high school, you have lunch. In Alaska, you go for a hike. But in New York City, you have brunch.

Perhaps it’s because everyone is so busy during the week, doing their nine-to-five corporate office job or six-to-three school or late-night homework from their grad program or working their five odd jobs at all hours of the days, that by the time the weekend rolls around, we are all desperate to gather our friends and decompress. And what better way to do it than at a time when you can have a leisurely morning at home, sleep in, or get up at a comfortably early hour and do a little bit of work around the house, and then wander up to one of your favorite casual brunch places for genius foods like garden veggie omelets, French toast, blueberry pancakes, mimosas and Bloody Marys? Plus there’s the fries-instead-of-potatoes option with an omelet that sometimes comes with chipotle dipping sauce. Or jalapeno cheddar grits on the side, instead, or a tofu scramble, or a bread basket that includes fresh baked mini muffins and slices of chocolate quick bread.

Recently there was a rumor going around that New York doesn’t serve alcohol before noon. I’m not sure who started this rumor, but I want to clear it up: In this city, it is never too early to start serving alcohol. I’m sure I have wondered many times how it was possible to be this drunk, it being not even noon yet. Vicious rumor, and not true, I assure you.

At Butch Brunch, we didn’t really drink much. (I’m taking a month off of drinking to experiment with sobriety, so maybe it was just me who wasn’t drinking, but I don’t remember any other alcohol ordered.) Contrary to the low-key Butch Brunches a friend and I organized about a year ago, where we searched out the restaurants in Brooklyn which included unlimited Bloody Marys or mimosas with their brunch specials, this crowd was quite interested in discussing identity, and not so much drinking.

I think it’s part of my own transition from single butch to being in a serious relationship, but my friends have been shifting over the past few years from mostly femmes to mostly butches. It’s curious, and a little strange, but I suppose it speaks to my growing up and intentionally changing who my friends are recently, too. I am certainly not opposed to being friends with femmes, and still have femme friends, but I’m noticing more and more that the people I’m choosing to spend my time with, and the friendships I continue to seek out, are with butches and other “masculine of center” (as the Butch Voices conference folks say) people.

Looking around the table, I felt so lucky to be a part of that gathering, so thrilled to get seven butch-identified people in one place. Sometimes they would share something about their own identities, or the ways they walk through the world, or the things they think about in navigating gender and presentation and fashion and family and community, and I would have this twinge of recognition, this little catch in my chest somewhere and the thought would run through my head: You are just like me. Of course, we’re not exactly the same, but having this similarity in solidarity is occasionally so thrilling, and I’m so glad to finally be cultivating it more successfully in my life.

It’s not like it’s a new idea. I’ve been seeking “butch community” and butch friends for years, just often without much luck. I’m not sure if, during the periods where I’ve been single, the butch friendships just became less of a priority for me than the femme sleepovers, but it’s certainly possible. I can take a guess where my energy was actually going.

Seeking out community and deep, long-lasting friendships is incredibly difficult, though, especially when your energies are more focused on getting laid and where the next thrill is coming from. And for a while, I was more focused on my new relationship with my other girlfriend, Kristen, than I was focused on friendships, since I got really excited really quickly about the prospects of being with her and building something long-term.

But now that we’ve settled into something stable, now that our relationship has some routine and we’ve established a lot of our own foundations, we are both seeking deeper friendships with people around us. It’s ever a challenge, especially when I know a lot of people, and a lot of people know me through my very visible butch/femme and sexuality work online. So how does one, as an adult, deepen friendships? How do you do that outside of school or work? Freelance writing doesn’t exactly have me interacting with a lot of other people daily.

It’s an ongoing struggle, this building of lasting relationships. Especially when I’m looking for people whose identities are similar to mine—though perhaps I shouldn’t be so narrow in my search. Perhaps it’s time for me to be more open to the similarities I have with all sorts of people, not just those whose gender identities are similar to mine. Problem is, until I feel like I have adequate validation around me for my own sense of moving through the world, until I have butch friends who get me and in whom I see my own life reflected, friendships with folks who aren’t butch sometimes seem to be missing something. But once those butch friendships are in my life, there becomes plenty more room for friends of all sorts of backgrounds and identities.

There’s going to be a few more Butch Brunches, one more on September 18th just before the Butch Voices NYC Regional Conference on September 25th, and one on October 16th, after the conference. We’ll decide whether or not there’s enough interest to keep it going after that. Who knows? Maybe we’ll end up with a great gathering of folks who like to sit around and shoot the shit and chat about butch identity. Or perhaps we’ll just have a Bloody Mary, and wander the shops, walk in the sun, and kick off the weekend with some good company and building friendships.
Tags:
Views: 1070