Mr. Sexsmith's Other Girlfriend: The Impact of Traveling While Butch 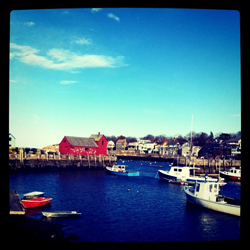 Last weekend, I turned 32 on April 3rd, and my other girlfriend Kristen took me on a romantic three-day getaway to Salem and Cape Ann, Massachusetts.

I often forget what it’s like to travel while butch. While there are various neighborhoods in New York City where I get a few odd side glances and where I feel out of place, the majority of the places I navigate through, in this eight million, people city completely ignore me. This is, in part, because while my gender presentation may be queer and unexpected, my presentation in general fits in: Levis jeans, H&M corduroy jacket, loafers, white iPhone headphones, Kenneth Cole black day bag. I don’t mean to credit designer consumer products with fitting in, but in this city it certainly helps. My freshly cut hair and fairly deep knowledge of the unspoken social rules in this region means that I fit in just fine.

But I don’t, in many other regions. Regardless that I am wearing the same outfit as 90 percent of the men in this bar, I don’t blend in—in fact, that’s what makes me stand out. I am rarely reminded of that in New York City. But when we get out of town, I am reminded of that everywhere.

Usually it starts at a gas station, or a rest stop. Somewhere Kristen and I stop to refuel on our way to the destination, wherever it may be. The stares start. Usually it is, at first, men. Sometimes they first stare a little too long at my gorgeous fierce femme girlfriend, though I always notice that first, the way that I constantly scan, scan, scan for predators like a watch dog. Usually, I catch their eye. Usually, they give me a look that is a cross between an apology and admiration with a dash of camaraderie, like I should join them in objectifying my girlfriend and consuming her beauty and overt femme sexuality with our eyes.

But sometimes, what starts with a weird predatory stare at my other girlfriend extends to a fearful, aggressive stare at me. One that is clearly conveyed as displeasure, mistrust, fear, and anger. If it were a film, it’d be the close-up shot of his squinty eyes, followed by a shot of me ... what? Scared? With a similar aggressive angry look?

Sometimes the looks extend from men’s angry, jealous stares to women — usually in the women’s restroom, where it is obvious to them that I don’t belong. Bathroom gender police are kind of a different topic, but usually that is the place where I get stares from other women.

This past weekend, after two days of these looks, I was a little worn down.

So when we walked into the fancy restaurant we’d carefully chosen for my birthday dinner on Saturday night at 9 p.m., and they told us all the tables were reserved and we’d have to eat at the bar, I was pissed. I had a strong emotional reaction that I didn’t quite understand at first. “How long is the wait for a table,” I asked. “We’ll just have a drink at the bar while we wait.” But even that felt lousy. I took some deep breaths. I tried to identify what was going on for me. Then, I tried to explain it to my girlfriend, who couldn’t quite tell why something so small was affecting me so deeply.

“I think it’s cumulative,” I explained. “After two days of feeling like I don’t fit in, like I’m standing out, like I am just wrong for walking down the street or into the bookstore or into the cafe or ordering a sandwich, when I do something that further proves that I don’t know the convention of a place, like not making reservations, I feel like I’m perpetuating that feeling of displacement and not belonging.”

She nodded. “Of course, that makes sense.”

It’s not something I’ve ever connected before—that my slightly obsessive trip preparation and planning is actually helping to alleviate some gender anxiety, the feelings that develop after having too much attention, after standing out too much, after being stared at the minute I step outside my urban bubble. Of course, intellectually, I know that I am in a small urban bubble, one that is more tolerant of gender difference than other places. But I forget, because I have the luxury to do so. I have the privilege to forget that in other places, people react differently to my clothes, my swagger, my hair cut. It is one of the reasons I travel frequently outside of this urban bubble, to be reminded that there is a big world out there that doesn’t operate the way my huge and limited city does. But it also makes it a relief to get back to a city that doesn’t look twice at me, because I am simply not that noteworthy.

The lack of reservations at the restaurant was just one of the two things that we uncovered through our weekend, the other being that though we had a great time at the sweet local bed and breakfast that Kristen found, we should probably look up and book the gay bed and breakfasts if we do that again. The intimacy of sharing walls and the breakfast table daily with random straight folks is just too much, on top of the constant staring and being on display of traveling through small towns.

This was the first weekend getaway trip that we’ve taken that wasn’t either camping or visiting another larger city, and the first time we’ve stayed at a B&B, so all of this was new territory. It was surprising to me to realize that some of my travel over-preparation was actually anxiety disguised as protection—though it completely makes sense, now that that realization has hit me.

And now that Kristen and I both know that, we can take better care at planning our trips in the future, from picking where we are staying to making reservations at the restaurant where we want to eat to calling ahead and making sure that the museum we want to visit is open the day we’re going to be there. And because we’ve figured out why it’s important to me to have those things in place, we can both be clear with each other about the planning, about the preparation, and about what we want to do while we’re visiting somewhere else, so that we can have the best experience possible, and be a team that is going through this othering process together, instead of letting the anxiety and fear of being othered affect our connection to each other.
Tags:
Views: 1227
Related articles