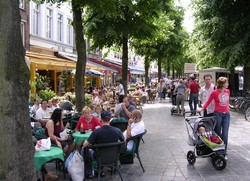 Doesn’t it seem like it’s harder to make friends now that we’re older? After high school, after college, after the gay adolescence of coming out and finding a tight-knit community to be involved in, after making stupid mistakes and getting more involved than necessary with the folks who run the scenes, after getting burned and realizing that really only 10 percent of people are interesting, and only 10 percent of those are queer, and only 10 percent of those I have anything in common with, I’m left with a whole lot of people I know, but not a whole lot of close friends.

It’s hard to make friends without frequent proximity, too. People in college, I saw in my classes three days a week, then saw them in a different class the following semester. People at work, I interacted with four or five days a week, depending on our overlapping schedules. Even back when I was a smoker, it was so easy to strike up conversations with the other smokers on our breaks, hovering near backdoors, in alleys, looking for a light or bumming a smoke.

I don’t miss smoking (the hacking, the shortness of breath, the smells, the cravings), but I do miss the easy socializing.

Now, working from home in the largest metropolitan area in the United States,I don’t have friends who are friends because of proximity. I don’t know most of the people who live in my neighborhood, though after three years at the same apartment (the longest I’ve been anywhere since I left home at 16), I do say hi to the neighbors on my block.

But neighbors aren’t usually friends, especially not for a kinky queer butch top, and I don’t run into people I know at the grocery store, I don’t run into friends at the gym or the coffee shop or the local organic vegetarian café. Partly this is because New York is huge, because even if all my friends happened to be going to a vegetarian café at the same time on the same night, we would all go to different cafes in different neighborhoods. Even living 10 blocks from someone would be a different neighborhood with different services, different Laundromats and watering holes and corner bodegas and farmer’s markets and post offices.

In smaller cities, the queers all live in one neighborhood, the alternative freaky kinkster vegetarian local organic folks all go to the same ice cream shop, we all go to the same concerts, the same movie theater, the best place for fair trade coffee. But in New York, the resources are everywhere, spread out, and sometimes the travel is even a deterrent to access.

I have often said that New York has everything and everyone and anything that you could possibly want. You can have any kind of life here. You can find any product, any grocery, any brand of hair spray, any special tool to take the door off of your refrigerator. But you have to: a) know where to find it, b) get to it, and c) pay for it—which are sometimes impossible hurdles to clear in order to access this anything that you want.

No doubt this is true for friends, too: You can build all sorts of communities here, any size circle around any flavor of interesting thing, and no matter what you’re in to, there is someone else around here somewhere who is into it, too. Might even be a dozen someones, or two dozen, or a whole club that meets once a month, or a mailing list, or a conference that someone is organizing to happen in the fall.

Problem is, when you organize around one singular thing, you might not have very much in common with these folks outside of that one thing. You never know, I suppose—you might meet your very best friend at that Vintage Belt Buckle meet-up, or the Kombucha Brewing gathering, or the Lesbian Fiction Book Club, but you also might not want anything to do with those folks. And when you only see them in one context, about one thing, once a month, how will you know whether or not you really get along?

Maybe this changes once we have kids. It seems like that bridges the proximity friendships that I’m used to having through school, work, and activities. But it seems that folks in New York have kids later than other cities, and there’s a whole world of queer artist folks out there for whom I don’t even know if that’s in their path.

So what do we do, the folks who aren’t getting pregnant and buying houses, the folks who are still going to clubs and bars to see literary performers and comics and touring poets, still staying up late with our books and journals and blogs, still making sense of our own lives and trying to process our place in the larger world?

As I get older, relationships are harder to manage, trickier to maintain, more precious, more rare, more beautiful. It isn’t quite as easy for me to connect deeply with others. Maybe my standards are higher. Maybe where it used to be okay that we both played the same instrument and walked in the same direction home from school after last period, now I want to know that our politics align, that our views on the world are similar. Or, if not similar, at least complimentary, not clashing—at least that we are able to communicate about our differences, listen to each other, understand where each other is coming from and value a different opinion and viewpoint.

Maybe that’s what it really comes down to: Communication. Relationship skills. Maintaining a relationship, even if we don’t have the proximity to see each other every week or every day. The ability to “find common ground and elevate the discussion,” as my mom used to say, even if we’re only seeing each other once every few months. To start talking again about our lives in ways that are meaningful and interesting. To work through snags, to practice our skills of naming what we’re feeling and articulating what we need.

So perhaps it’s not a bad thing that we seem to have fewer friends as we get older. Perhaps we have better friends, and that is certainly an important improvement. Perhaps we continue to learn who is best for us, in our lives, and hope we can continually put that into practice.
Tags:
Views: 1129
Related articles